SHANGHAI -- A record number of Chinese travelers are seen heading abroad during their week off for the Lunar New Year holiday, bringing heavy consumer appetites to destinations that have previously escaped tourists' notice.

Some 6.5 million people are expected to make trips overseas during the week-long holiday beginning Thursday, according to a Chinese government think tank focused on travel trends. This is 6% more than last year, as a strong yuan has made foreign travel feel relatively cheap. The Lunar New Year itself occurs Friday.

As in 2017, Thailand is seen as the top destination, with places such as the island of Phuket offering an escape from the winter chill. Japan is second on the list, with reservations for package tours to the country from China and elsewhere up 7% on the year as of early February, according to travel agency JTB. South Korea, the third-most popular destination last year, has dropped out of the top 10 after it allowed the U.S. military to deploy an advanced anti-missile system China fears could be used for surveillance.

Travel outside Asia is also growing, to destinations ranging from northern Europe and Canada to the South Pole. In 2017, a total of 130 million Chinese ventured abroad -- more than the entire population of Japan.

Even within favorite destinations such as Japan, tourists are more frequently heading off the beaten path. The shinkansen bullet train that now connects Japan's main island of Honshu with the island of Hokkaido, a popular winter destination, is bringing more travelers into corners of the country where even locals rarely travel. 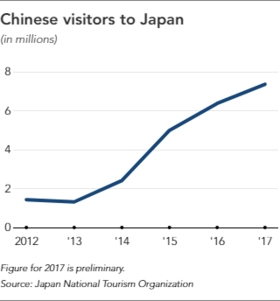 The Takayama Inari Shrine, in Tsugaru, Aomori Prefecture, is one such place. Its tunnel of bright red torii gates, akin to that at the massively popular Fushimi Inari shrine in Kyoto, have drawn a number of intrepid travelers willing to trek more than 3km from the nearest bus stop. "Some have hauled their suitcases for close to an hour to get here," according to the shrine's head priest.

Aomori's more accessible institutions have also drawn notice. A museum offering visitors a taste of the city of Aomori's famed Nebuta festival saw the number of Chinese group travelers paying for entry soar more than eightfold on the year in the nine months ended December.

Regardless of where they are headed, many tourists are prepared to spend handsomely. A Shanghai couple and their child who took off to Japan on Tuesday with plans to go skiing in Niigata Prefecture look to drop around 60,000 yuan ($9,444) in all. This figure includes spending on goods including clothing, timepieces and cosmetics.

The average Chinese traveler in Japan spends over $1,800. Tax-free sales to foreign visitors by department stores rose 9% on the year in February 2017 and 46% for the year overall, according to the Japan Department Stores Association, and those figures are seen climbing again in 2018.

Japanese companies are angling to rake in as much of this cash as possible. Department store chain Mitsukoshi's location in Tokyo's upscale Ginza district has begun accepting Alipay, the popular smartphone-based payment service developed by Alibaba Group Holding. The Isetan Mitsukoshi Holdings unit began on Tuesday sending advertisements via China's top social media app WeChat to Chinese travelers within 5km of the store, and will give out samples of a popular fruit dessert throughout the Lunar New Year holiday. Takashimaya began accepting Alipay and WeChat Pay at the cosmetics counters of some locations, like this store in Tokyo.

Rival department store Takashimaya now accepts Alipay and Tencent Holdings' WeChat Pay at cosmetics counters in nine locations across Japan. These services offer shoppers a shot at discounts during the Lunar New Year shopping season, and the convenience of paying by smartphone holds year-round appeal. Even popular hotels have started accepting Alipay, and JTB is pushing more of its partners such as hotels and restaurants to do so, in line with an agreement with Alibaba.

The fight for shoppers' business is no less intense in China. The Lunar New Year period is among the largest shopping seasons of the year, accounting for more than $120 billion in consumption in 2017, and is the high point of the year for Chinese companies.

This year, smartphone makers hope to exhaust their large stockpiles during the holiday despite market saturation. If this strategy falls flat, the global smartphone market, of which China accounts for 30%, could feel the effects as manufacturers begin to adjust inventory and cut production in earnest, with ripple effects for producers of parts such as semiconductors and displays. Last year, smartphone makers' shipments in China dropped 5% -- the first-ever decline -- according to research company IDC.

There is some concern that China will not be up to its usual feat of consumerism in 2018. "The holiday mood is ruined," a worker in Shanghai said after stock prices tumbled here on Friday. The real estate market, a major driver of capital formation in China, is also showing signs of shifting after a period on the rise, with prices on some new residential developments in Beijing, Shanghai and elsewhere dropping below levels seen a year ago. In taking steps such as purchase restrictions to address the apparent property bubble, authorities may have inadvertently brought Chinese consumers' buoyant spirits back down to earth.