Middle East, Russia on defensive as cheaper fuel floods in 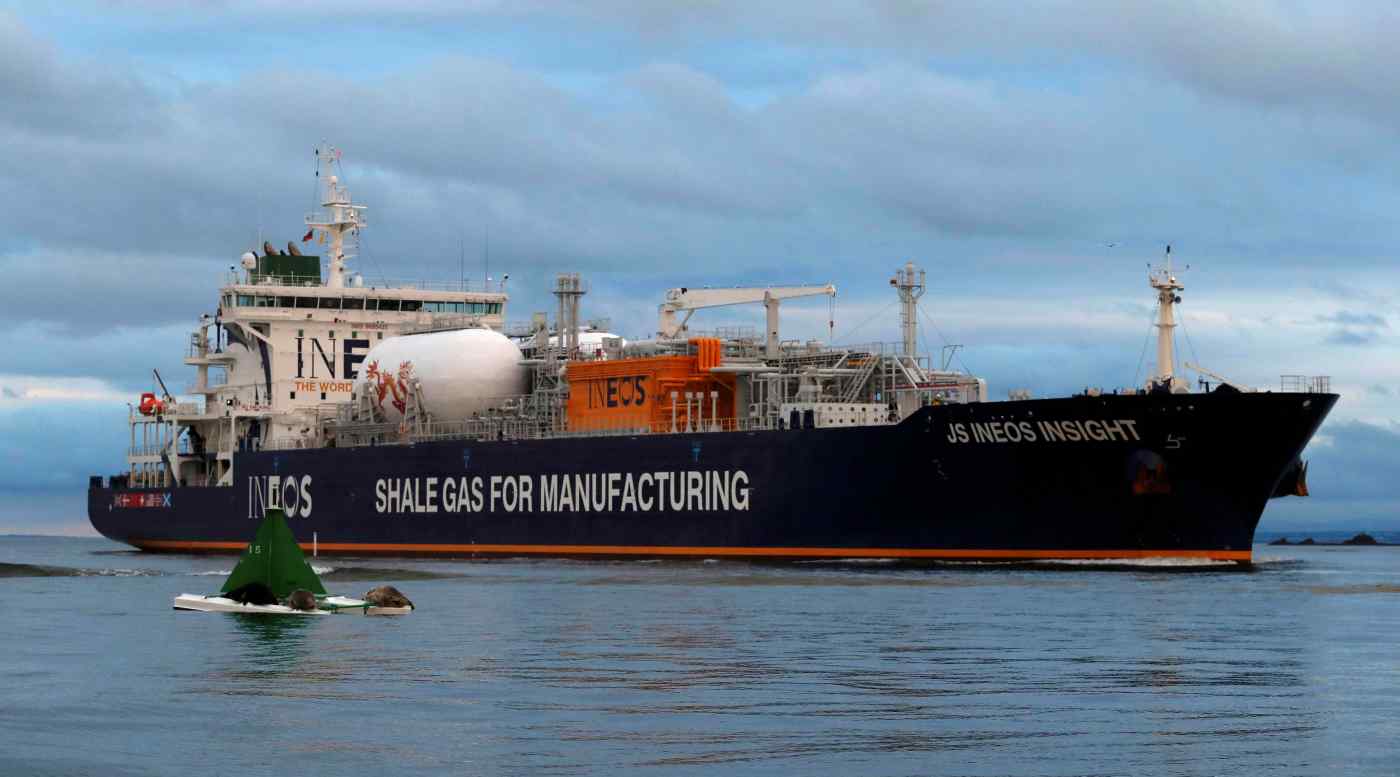 TOKYO -- Energy markets across Asia could be about to undergo a huge overhaul. Driven by the shale drilling revolution, U.S. exports of crude oil and liquefied natural gas are growing rapidly and likely to make significant inroads into the market share held by Middle Eastern producers.

U.S. crude oil prices have been so low that new customers have even been found in India, while American LNG comes relatively free of restrictions -- a big draw for major buyers like Japan.

At the end of 2015, the U.S. decided to lift its ban on the export of crude oil for the first time in 40 years. Pressure for exports had been mounting as growth in shale oil production had led to increased stockpiles.

U.S. crude oil exports have recently been boosted by relatively lower prices -- they fell after Hurricane Harvey hit the south of the country in August. West Texas Intermediate crude oil futures were sold on speculation that oil refineries in Texas would stop operating, which would leave some amount of crude oil unused and put downward pressure on new demand. The price difference between WTI futures and the European benchmark North Sea Brent crude futures was in the $2 per barrel range until early August, but has now widened to the $5 range. 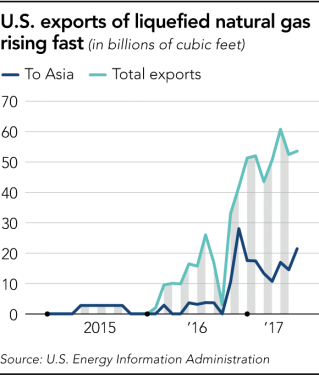 Under the tail wind, the country's crude oil exports reached a record high in the last week of September, according to the U.S. Energy Information Administration. But whether or not the momentum is sustainable is the subject of debate.

"U.S. crude oil is being purchased simply because its price is low as the hurricane has expanded the price difference," said Mikiko Tate, a senior analyst at Sumitomo Corp. Global Research, suggesting that the surge would be temporary.

However, "it is very significant that now, customers are visible," argued Masayo Kondo, president of Tokyo-based company Commodity Intelligence. In his view, Middle Eastern oil producers may lose ground while they implement a coordinated production cut agreed by OPEC.

The shake-up has not been limited to crude oil. U.S. exports of LNG to Asia jumped 12 times on the year in the first seven months of 2017.

"U.S. LNG has such great potential that it could change the market fundamentally," said Yuji Kakimi, president of the world's largest LNG buyer JERA, on Oct. 18 at a conference in Tokyo attended by ministers from LNG producing and consuming countries. JERA only began importing American LNG in January.

The Southeast Asian and Middle Eastern LNG currently imported by Japan on long-term contracts is generally subject to "no destination flexibility" clauses, under which sellers restrict resale by purchasers. U.S. exports come with no such restrictions, meaning it can be sold on to European customers, depending on demand, Kakimi said. 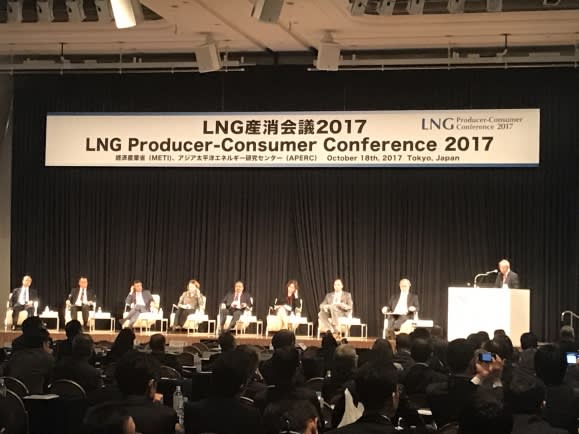 Ministers of LNG producing and consuming countries gather for a conference in Tokyo on Oct. 18.

The Japan Fair Trade Commission released a report in June saying that destination clauses could be in breach of the country's anti-monopoly law. "I would like to request LNG producers to think harder on ways to improve the attractiveness of LNG, including proposals of more rational and flexible trade conditions," said Hiroshige Seko, Japan's minister of economy, trade and industry, at the Tokyo conference.

While refraining from making a direct counter-argument, Mohammed bin Saleh al-Sada, the minister of energy and industry of Qatar, the world's largest LNG exporter, said the task at hand was to strike a balance between the demands of buyers seeking flexibility and the needs of producers who need a stable cash flow.

The U.S. is now on the offensive and expected to be the source of an estimated 18% of global exports in 2022, and producers for whom Asia is a major source of earnings are having to shore up their positions.

In early September, Gazprom CEO Alexey Miller and Mitsui & Co. Chairman Masami Iijima met in Vladivostok, where they agreed to cooperate on projects including the construction of small and midsize LNG plants. The Russian government-affiliated conglomerate is intent on consolidating its foothold in the major Japanese market before U.S. gas floods in.

On the consumers' side, emerging economies in Asia are likely to have a much greater presence as buyers in the LNG market. The number of importing countries is expected to rise to 47 by 2022 from 38 in 2016. Bangladesh and the Philippines are beginning to import LNG to fuel rapid growth in electricity consumption and technology innovation.

Bangladeshi state-owned energy company Petrobangla signed the country's first LNG import contract at the end of September, through which it will bring in 2.5 million tons a year from major Qatari producer RasGas for 15 years.

"Bangladesh has already ensured sustainable annual growth of above 7%, and we are striving to ensure energy security and a reliable supply of gas to our entrepreneurs," Petrobangla Chairman Abul Mansur Md. Faizullah stated. "LNG will play a vital role in the growth of the Bangladesh economy, and we are happy to enter into this historic partnership with Qatar, a long-trusted friend."

Most market watchers foresee new LNG-importers buying in small amounts as well as a rise in purchases in spot transactions and under short-term contracts. The number of short-term buyers pouncing on low prices is also likely to increase.

Gas liquefaction facilities, however, require significant investment, and producers need stability. "Can suppliers make investments in the belief that there should be people, whoever they may be, who buy depending on the price? This is a big problem," warned Keisuke Sadamori, director for energy markets and security at the International Energy Agency, speaking from the point of view of traditional gas producers.

Can suppliers make investments in the belief that there should be people, whoever they may be, who buy depending on the price? This is a big problem

Keisuke Sadamori, director for energy markets and security at the International Energy Agency

Whether the U.S. entry changes rigid conventional trade practices depends on negotiations, according to Dave Ernsberger, global head of energy pricing at U.S. research firm S&P Global Platts. "A period is just beginning for the U.S.  And they have already shown that they are very open to free markets," he argued, which could put huge pressure on long-established exporters.