Roads can convert Myanmar from economic void to hub 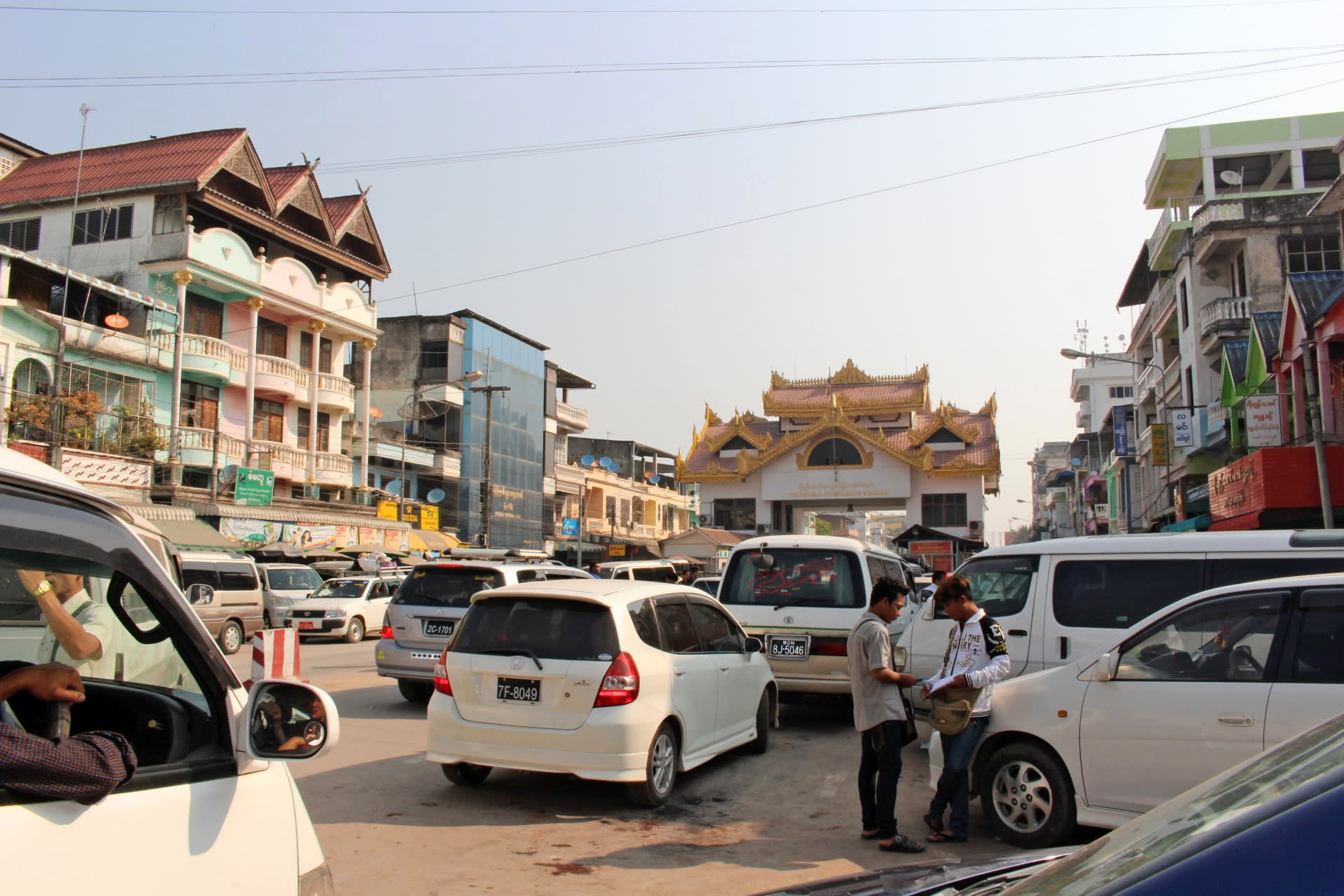 YANGON -- Once regarded as "Asia's missing link," Myanmar is undergoing a road construction boom. Seen as vital for economic development, arterial roads are being planned and built with greater urgency, and advances in democratization as well as cease-fires with ethnic minority rebels have sped projects along.

The construction of roads connecting Myanmar with Thailand, which started ahead of other projects, has not only increased trade in miscellaneous daily goods and other items, but also encouraged corporations to make advances into the country.

Myanmar, with its important geopolitical location, is about to bloom along with a road construction boom.

A two-lane paved road threads through steep cliffs in the eastern Myanmar district of Kawkareik, and big trucks move along at breakneck speed. The road is the last section of the East-West Economic Corridor, an international road from Danang, a Pacific port city in Vietnam, to Myanmar via Laos and Thailand.

A rugged path stretching about 50km between Kawkareik and Myawaddy, which borders Thailand, was so bad that it was called the worst bottleneck of the corridor. With public and private support from Thailand, roadwork started in 2012 and finished last summer. Within less than a year of its completion, the new section has cleared a path to make this road into a main economic artery.

A mountain road was built in Kawkareik while the country was under military rule, but the road is so narrow that it only functions as a one-way street whose direction of travel is changed every other day. Vehicles cannot travel faster than 30kph.

The new road enables drivers to cruise at more than 80kph, shortening the travel time to the Thai border to less than one hour, or one-fifth the time needed in the past. A 30-year-old merchant who uses the road to transport fruits and vegetables said, "The new road ensures a comfortable, though bumpy, ride and is a boost to my business because I can return from Myawaddy on the same day."

Indeed, the road has been a boon for trade. While imports from Thailand to Myanmar in April-September, the first half of fiscal 2015, grew 17% from a year earlier to about $900 million, the rate of growth topped 40% in September, immediately after the road opened.

Although trade between Thailand and Myanmar has gradually expanded after democratic reforms were instituted in the latter country, it is expected to log the biggest gain in fiscal 2015 since the opening of the road, in part because the transfer of goods via Myawaddy accounts for 30% of cross-border trade.

There are many other plans to build arterial roads between the two countries. Last autumn, construction started on the second Thai-Myanmar Friendship Bridge to connect Myawaddy and the Thai town of Mae Sot over the Moei River, which flows along the border. With expectations of larger traffic volumes, the bridge has been designed to carry significantly more weight than the first one. 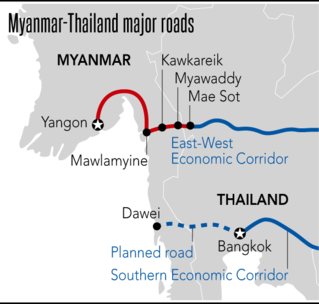 In Dawei, Italian-Thai Development, the biggest construction company in Thailand, will pave a road over a distance of around 150km between the southern Myanmar city and the Thai town of Kanchanaburi. The road will be connected to the Southern Economic Corridor, an international arterial road traversing mainland Southeast Asia. When completed, it will have an impact on cross-border trade comparable with the new road in Kawkareik.

The current construction binge was unthinkable several years ago. Infrastructure investment stagnated in Myanmar under the military junta because of international sanctions. With fighting between national troops and the ethnic minority Karen intensifying over the years, roads were frequently closed in and around Kawkareik, which was under the influence of the Karen National Union and the Democratic Karen Benevolent Army.

Changes came when Myanmar began making democratic reforms in 2011. Foreign nations resumed official development assistance to Myanmar as the administration of President Thein Sein brought the country back to the international fold. Infrastructure improvements began again because loans from international lending organizations, such as the World Bank and the Asian Development Bank, became available.

Starting in 2013, furthermore, the KNU and DKBA showed conciliatory attitudes as the government began peace negotiations with ethnic minority rebels, resulting in a historic cease-fire in October 2015.

DKBA troops still maintain checkpoints along roads in Kawkareik, but soldiers wear uniforms with the national badge attached and even pose for photos with tourists. Along with the new construction, safe passage has greatly enhanced traffic volume on the road.

Trucks traveling back and forth on the new road are filled with foodstuffs, consumer goods and construction materials as demand for these products has increased sharply in Myanmar because of its economic growth. 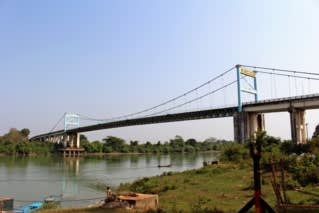 The Japan International Cooperation Agency plans to provide loans for the repair of three bridges in Mawlamyine, one of which is pictured here.

addition, the country is witnessing the emergence of a manufacturing industry. While labor costs are rising in Thailand amid a scarcity of labor, Myanmar has a labor surplus, which is holding wage levels down to one-third those of its neighbor. Improvements in infrastructure, making the transport of parts and materials easier, will give manufacturers an incentive to relocate plants to Myanmar.

In a suburb of Myawaddy on the border with Thailand, a construction project led by local businesses is underway to open an industrial park. Thai companies have already started constructing sawing and rubber plants there, and prospects are good for new jobs coming its way.

All of this work has increased expectations of economic benefits for the whole eastern part of Myanmar.

Myanmar's manufacturing industry mostly consists of food, consumer goods and other products for domestic consumption. Exports are limited to light industries, such as sewing. In contrast with Thailand and Vietnam, there are almost no automobile or electronics plants in the country.

But the situation will change drastically when flexible procurement of parts from manufacturing plants, concentrated in Thailand, becomes possible thanks to further construction of international roads.

Nippon Express began land transportation services between Thailand and Myanmar last summer, using the East-West Economic Corridor. The travel time between Bangkok and Yangon is three days, compared with the two to three weeks needed for conventional marine transportation via the Straits of Malacca.

Because the service is not widely known, the Japanese trucking company only runs one or two trucks per week. However, if the service is incorporated into cross-border supply chains in the Association of Southeast Asian Nations, the company hopes to pave the way for manufacturers' forays into Myanmar with cutting-edge assembly plants.

The construction of international roads is not limited to areas close to the Thai border. A road to link Mandalay, Myanmar's second-largest city, located in the northeastern part of the country, to the border with China is in the works. Preparations have begun for the construction of a large-scale dry port, financed with Chinese capital. Infrastructure improvements for cross-border trade with China, which is a much larger trading partner than Thailand, will have an "immeasurable impact" on Myanmar, a Japanese trading house official said.

In the Sagaing District facing the border with India, the construction of a road, supported by the Indian government, is progressing. The Indian government hopes the international road will spur delayed economic development in its seven northeastern states. With the help of funding from neighboring countries, the development of border areas could bring prosperity like that seen in Myawaddy to the region. Myanmar used to be ridiculed as "Asia's missing link" because it was shut off from the international economy for half a century while under military rule.

But given its geographical location as a link to China, India and ASEAN member countries, Myanmar can serve as a gateway to a gigantic market totaling half of the world's population. Advances in infrastructure, especially through the construction of international roads, gives Myanmar the potential to become Asia's economic hub.