Thai poultry exports seen getting a 3% bump in 2017 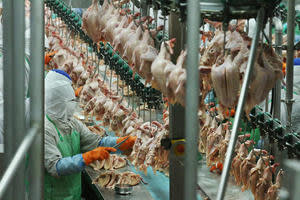 BANGKOK -- For the first time in 12 years, Thai chicken is returning to South Korean dining tables.

An outbreak of the bird flu in Thailand in 2004 saw Seoul place a ban on poultry imports from the Southeast Asian country. On Thursday, however, 15.2 tons of frozen chicken headed off to the South Korean capital from the eastern Thai port of Laem Chabang, marking the end of the ban. South Korea was the last of the 20 major importers of Thai chicken to resume shipments.

The first shipment, worth 1.73 million baht ($48 million), is from Charoen Pokphand Foods, the flagship company of Thai agribusiness conglomerate Charoen Pokphand Group and the country's largest chicken processor. Several more deliveries from other companies are slated to follow soon, with a total of 106.64 tons, valued at 12 million baht, to be shipped by the end of the year.

The about-face comes at a time when South Korea itself is tackling a bird flu outbreak. The H5N6 virus has been detected nationwide, and nearly 10 million birds have been slaughtered since mid-November.

South Korean officials inspected Thai chicken processing plants earlier this year and gave the green light for exports on Nov. 9. Twelve plants got the nod, including three from CP Foods, two from Betagro and one from the Thai poultry arm of U.S. company Cargill.

Thai Agriculture and Cooperatives Minister Chatchai Sarikulya, who presided over a ceremony Thursday to celebrate the first shipment, said he expects the resumption of exports to South Korea to boost Thai poultry shipments by 3% on the year in 2017. He said full-year shipments will likely reach some 40,000 tons.

Virachai also said that for South Korea, Thailand's location offers advantages over chicken exporters in Brazil, the U.S. and Europe.

Japan was the largest importer of Thai chicken in 2015, according to the Thai Broiler Processing Exporters Association, accounting for 48% of total exports. The European Union was next, at about 41%. Japan resumed imports in late 2013, a year and a half after the EU.