After Fed moves, monetary policy set to come back down to earth TOKYO -- With the Bank of Korea raising rates for the first time in more than six years, after the U.S. Federal Reserve tightened its policy, the pressure on central bankers elsewhere in East Asia to follow suit is intensifying.

After nearly 10 years of easy money, policymakers are responding to stronger economic growth, a modest tick-up in inflation, creeping increases in market interest rates -- and concerns about possible over-heating in at least some financial and property markets.

But, as in the past, East Asian banks are also closely watching the Fed, which has for decades been the bellwether for the region's policy makers, particularly when it comes to timing. 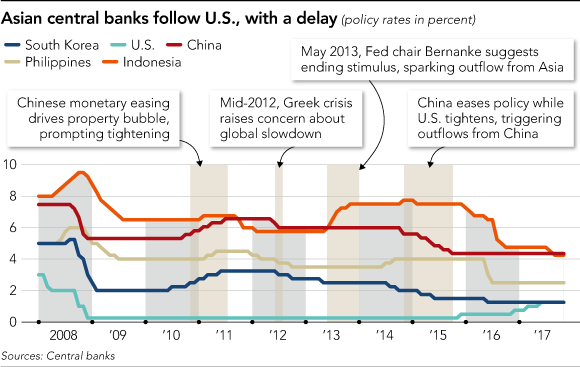 Even though the region's financial and economic dependence on the U.S has declined, and both China and Japan are paying less heed to Washington in their monetary policies, the economic giant across the Pacific retains huge influence.

The Fed, which started raising rates two years ago, announced in September it will normalize its balance sheet over the period of next three years, beginning in October, marking the end of its quantitative easing policy

Masato Horie, economist at Mitsubishi UFJ Research and Consulting, said some Asian central banks may feel under pressure to raise interest rates to cushion the impact of U.S. monetary tightening.

When American rates rise, capital tends to flow out of other regions -- including East Asia -- and return to the U.S often causing the U.S. dollar to rise and sometimes shaking regional financial markets, causing falls in stocks and bonds. The Fed's power was amply demonstrated in the so-called 2013 taper tantrum, when fears of an early end to U.S easy money spooked financial markets, including in Asia. Indonesia was among the worst affected, forcing its central bank to lift interest rates to support its falling currency.

Asia was hit again after the election of Donald Trump as U.S. president in November last year, as expectations grew that, with Trump's promised stimulus policies, the Fed will raise interest rates more quickly than previously expected, says Faraz Syed, an economist at Moody's Economy.com. Indonesia, Thailand and South Korea were among the countries affected.

Asian economies, including South Korea, have built up foreign exchange reserves to deal with a sudden reversal of foreign capital. For instance, South Korea has reserves of $371 billion today, compared to around $250 billion before the 2008 global crisis. Still, Asian central banks know that reserves are only a temporary cushion -- if the U.S. prepares to tighten monetary policy, as it is doing, East Asian central bankers will want to reduce the allure of U.S markets by raising rates locally.

Also, most are reasonably confident about the economic outlook, given recent increases in global and regional growth forecasts and for the region. The International Monetary Fund raised its growth projection for the world and emerging Asia by 0.1 point each, to 3.6% and 6.5% respectively for 2017 and to 3.7% and 6.5% for 2018. Inflation is rising, but in most countries the increases are still very modest. The Philippines is an exception: an import boom is expected to create the first full-year current account deficit in 15 years, driving the peso to an 11-year-low against the dollar and fueling domestic inflation, says Moody's Economy.com. Overall Morgan Stanley says in a report this week: "As the macro outlook for the region continues to improve and as inflation normalizes, we expect central banks in the region to begin lifting interest rates in a counter-cyclical manner."

China poses risks to growth as it struggles to restructure its huge economy away from export-led growth towards domestic consumption and from manufacturing into services, whilst simultaneously managing heavy debts, particularly in the property sector. Analysts are divided as to how well China will cope with these concerns. A shock cannot be ruled out but investors have been living for several years with this possibility and Beijing has so far avoided a serious destablization.

Meanwhile, Japan, East Asia's second largest economy, remains committed to Abenomics, prime minister Shinzo Abe's, push to end two decades of stagnation with a combination of structural reforms and ultra-easy monetary policy. At the margin, this approach could mitigate U.S Fed tightening by providing other countries with low-cost yen when dollars become pricier. That could relieve some pressure on other central banks and keep rate increases modest and slow. Despite recent signs of economic revival, Japanese price pressures remain muted, with core inflation rising very slowly and standing at just 0.7%, well below the BOJ's target of 2%. Financial markets in the region are beginning to price in a normalization of monetary policy and even tightening. Yields on 2-year and 10-year government bonds in emerging East Asia have risen since the recent announcements by the Fed and, separately, by the European Central Bank that they will start scaling back their monetary stimulus. The BOJ is sticking to its course - and low markets rates indicate this it will continue to do so. But overall the tone from the developed world has changed. "The rise in yield in the region tracked the trend in major advanced economies," says the Asian Development bank.

Central bankers rarely stop worrying about possible market shocks, even when they don't talk about them. The equity markets in the region are booming, like those in the U.S and Europe. The MSCI Emerging Markets Asia index rose 39% since the start of the year and has reached all-time highs.

This, along with a surge in housing markets, has fueled concerns about possible localized asset price bubbles and raised fears of sudden corrections. Household debt is particularly high in China, Hong Kong and South Korea, says HSBC, the bank. The ADB, in its latest Asia Bond Monitor report, argues that the region's equity rally is backed by a combination of strong macroeconomic fundamentals and healthy corporate earnings, and predicts that "the bull run in the region's equity markets is likely to continue in the short-term."

But, it also warns,"the generally benign scenario is no cause for complacency since some risks loom on the horizon." It is necessary, the ADB says, "for policy makers in emerging Asia to monitor possibly excessive leverage in regional economies and strengthen their financial positions ahead of the long-discussed return of more normal monetary conditions."

And the biggest risk in the ADB's view? "The ongoing normalization of monetary policy by the Federal Reserve."