After banner 2017, worrying signs for production and consumption appear SINGAPORE -- Southeast Asia's strong exports and consumption, which helped sustain rapid growth throughout the region in 2017, are in a delicate spot as demand for electronic parts falls and interest rate hikes threaten to cool spending.

Last year, Vietnam and Thailand enjoyed their highest rates of growth in gross domestic product in the past decade and five years, respectively. Malaysia and Singapore were among the countries that beat the previous year's growth rate.

Exports were the driving force behind those economies experiencing booms. Malaysia's manufacturing exports, such as electronics and chemicals, grew about 19% year on year, boosting employment and consumption in turn. The rise in private-sector wages topped 6% in the October-December quarter, and individual consumption grew 7%.

In Vietnam, home to major smartphone-making facilities for South Korea's Samsung Electronics, production in the manufacturing sector grew 14%. Export growth also accelerated in Thailand, with its high concentration of manufacturing goods for export, such as automobiles and electronics. Combined exports for the six major members of the Association of Southeast Asian Nations grew by double digits in every month of 2017 except June, according to Japan's NLI Research Institute.

But there are causes for concern. For Singapore, which last year notched its highest growth rate in three years, January's value of electronic-product exports fell 3.9% on the year, marking a second consecutive month of decline. Information technology goods, which had supported overall export growth, faced a serious slump, with PC parts dropping 31% and disk drives falling 39%. 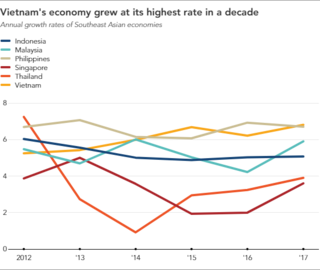 With shipments of smartphone-related products sliding, the Singapore market could face a 5-10% decline in production in 2018's first half, said John Nelson, president and CEO of UTAC Group, a Singapore-based semiconductor assembly and testing services provider.

A slowdown in factory activity in China -- which wields great sway over Southeast Asian economies -- points to slower growth of exports from Singapore in the months ahead, according to Francis Tan, an economist at Singapore-headquartered United Overseas Bank.

With monetary tightening on the horizon, whether individual consumption will be able to support growth is the top concern. A number of Southeast Asian central banks are expected to consider hiking key interest rates soon, seeking to maintain the size of gaps with the U.S. Federal Reserve as it continues to lift benchmark rates. In January, Malaysia's central bank raised its key rate for the first time in about three and a half years.

Higher interest rates tend to chill consumption, such as through heavier debt loads. With consumption already faltering in Indonesia and the Philippines, slumps elsewhere probably would contribute to lowering growth rates.

The International Monetary Fund expects the rate of economic growth for Indonesia, Malaysia, Thailand, Vietnam and the Philippines to remain strong at 5.3% in 2018-2019. That forecast depends on continued strength in exports and consumption.