When it comes to labor costs, Sri Lanka is a bargain, considering the size of its economy, according to statistics from the Japanese trade promotion organization known as JETRO.

Since the island's civil war ended in 2009, Sri Lanka's economy has been expanding. Its per-capita gross domestic product for 2015, as reported by the Central Bank of Sri Lanka, was $3,924 -- higher than the $3,377 in Indonesia, as released by Statistics Indonesia.

In contrast, a JETRO survey indicates that average salaries in Sri Lanka's manufacturing sector have not grown much. According to the 2016 survey among Japanese companies operating in Asia and Oceania, the average monthly base salary of a factory worker was $165. For a factory engineer, it was $396, and for a manager it was $720. These are all far below the equivalents in Indonesia -- $298, $449 and $993.

Even in Cambodia, whose per-capita GDP is roughly a third of that in Sri Lanka, manufacturing wages are comparable -- $175 a month for a factory worker, $391 for an engineer and $885 for a manager.

As factory wages are surging in the 10-member Association of Southeast Asian Nations, Sri Lanka's wage competitiveness could end up attracting Japanese companies. 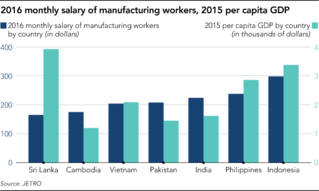 "Could" is the keyword here. Sri Lanka's hospitality, restaurant and information technology sectors are sponging up the country's labor pool, leaving factories on the lookout for workers.

According to JETRO's inquiries to factories in Sri Lanka, the demand for manpower in the country is shifting from manufacturing and other secondary industries to tertiary service industries. This is mainly the result of the government promoting the information technology sector as a base for the economy, as well as to increasing hotel and restaurant demand for workers.

To secure enough manpower, a Japanese company in the county began sending Sri Lankans to Singapore for six-month training sessions and giving them pay raises. During the training period, Sri Lankan workers are paid a special allowance in addition to their base salaries -- a big incentive, the company said.

Securing enough local workers is crucial, but foreign companies should bear one thing in mind when seeking to expand in the country: Sri Lanka's labor laws seem to be based on the standpoint of protecting workers.

It is even difficult to dismiss an employee who fails to properly fulfill his or her duties. There are also legal procedures that sop up significant amounts of time and expenses. To avoid hassles, it would be helpful to draft clear employment contracts or establish rules of employment, perhaps with help from legal professionals.

Toshihiro Mizutani is Deputy Director of the Asia and Oceania Division, Overseas Research Department, at the Japan External Trade Organization.