Sri Lanka hopes tourists come for the sun, stay for the slots

COLOMBO -- Sri Lanka has great beaches, wild elephants and ancient temples. But Australian gambling boss James Packer thinks the island nation needs something else if it is to reach the government's ambitious tourism goals: better casinos. 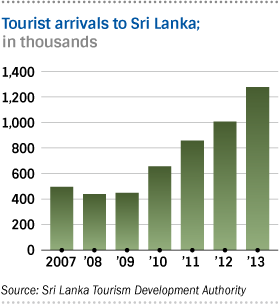 Packer, chairman of Crown Resorts, is seeking to develop a $400 million casino hotel in Colombo through a joint venture with a local casino owner. Over the objections of Buddhist leaders and opposition legislators, the government has stiffly embraced Packer's argument that improved gambling could lure bigger crowds of Chinese and Indian visitors. Controversially, the government has extended tax incentives for Crown's project as well as two similar ones local developers plan to build nearby.

Tourist traffic to Sri Lanka has already reached new heights since the government's war against the Liberation Tigers of Tamil Eelam, known as Tamil Tigers separatist group, ended in 2009. Arrivals last year hit 1.27 million, up 26.7% from 2012 and almost triple the level four years before.

The Sri Lanka Tourism Development Authority is far from content with those numbers, though. The authority aims to double arrivals to 2.5 million by 2016, and it is not after more backpackers. Officials want tourists to be spending an average of $200 a day by that year, about double the current level. In 2009, the average was only $65.

Packer, speaking to business delegates at the Commonwealth leaders' summit in Colombo in November, said the targets were "only achievable with the right tourism infrastructure and attractions." Think Singapore-style integrated resorts, he suggested.

"No one should be in any doubt," Packer said, "the wealthy Chinese middle class wants luxury travel, luxury hotels, signature restaurants, quality entertainment, gaming, casinos and high-end retail... They are attracted to luxury integrated resorts, which meet all of their travel needs under one roof."

Sri Lankan tourism executives agree Colombo could use new visitor magnets, since most of the country's big attractions are well away from the capital. The city's existing small casinos do not cut it, it seems. "Good entertainment, including casinos, is a must if you want to attract people," said Malin Hapugoda, managing director of the Aitken Spence Hotels chain. "At the moment, if you take Colombo, it is dead."

Then again, Chinese tourists are coming to Sri Lanka in droves even without new hot spots. Arrivals rose 81.6% over the first 11 months of 2013, thanks in part to fresh tour packages and air routes.

The hospitality market in the neighboring Maldives appears to be proof that not all Chinese travelers demand big-time excitement. The Islamic country bans gambling and offers little in the way of nightlife, yet China has become its biggest source of tourists. Aitken Spence's hotels there command significantly higher rates than the group's Sri Lankan locations, according to a report by Amba Research.

In Sri Lanka, Aitken Spence and other developers are investing in casinoless resort projects away from Colombo. Their plans include the eastern coast, which features some of the country's best beaches but was long off-limits as a Tamil Tigers stronghold.

Improved infrastructure, including a new expressway to southern resort areas and new airports, is supporting the development binge. Aitken Spence's parent company is pouring $100 million into a resort on the southwest shore to be managed by Spain's RIU Hotels, while Hong Kong's Shangri-la Hotels and Resorts and Sri Lanka-listed East West Properties are developing resorts on southern bays.

The luxury hotel market is not completely free of head winds. Occupancy rates at higher-end establishments sagged last year to 67%, down 3 percentage points from 2012, according to Jones Lang LaSalle Hotels & Hospitality Group. While the advisory company partly attributed lower occupancy in the capital to higher government-mandated minimum room rates, increased competition is also a factor. Homestays, new guesthouses and boutique hotels are vying for guests.

Big hotel operators are prodding the government to eliminate what they describe as tax preferences for smaller properties. They are also urging officials to focus on promoting Sri Lanka tourism internationally. Harry Jayawardena, chairman of Aitken Spence Hotels, last year said it is "critical" for Sri Lanka to develop a marketing strategy and secure "its own perceptual space" in consumers' minds.

Analysts from Capital Alliance, a Sri Lankan investment bank, stressed in a 2013 report that investment in training is desperately needed, too. They estimated the island's hospitality sector was short 6,000 skilled workers in 2012. They projected the gap would widen to 78,000 in 2016, based on the assumption that two new casinos would open.

Plans for three, including Crown's, received government approval in December -- though the official notices did not mention gambling and cabinet ministers insist no additional casino licenses will be issued.

While this has not been publicly confirmed due to political sensitivities, the understanding is that the government will allow the transfer of licenses from Colombo's existing casinos to the new ones under the justification of concentrating gambling in a designated zone. Both Rank Holdings, Crown's partner, and businessman Dhammika Perera, who is building one of the other approved projects, already run casinos in the capital.