HAMBANTOTA, Sri Lanka -- A South Korean ship unloads its cargo of cars at a terminal in Hambantota port, providing the only sign of life at Sri Lanka's newest harbor, sited on its southern coast. The rest of this $1.4 billion port, built with a loan from the Export-Import Bank of China, sits idle. In some areas, weeds are spreading. Visitors to the port's administrative offices must tiptoe around feral dogs stretched out in front of an empty entrance hall.

Emptiness has dogged the port since it opened in 2012. Five years later, only a handful of car carriers drop anchor each week. The ruling coalition government, led by President Maithirpala Sirisena, says the port is a "white elephant" left by the previous regime, led by the autocratic former President Mahinda Rajapaksa. Mounting operating losses, estimated at $235 million, deepen the impression that the Magampura Mahinda Rajapaksa Port, as the facility is officially known, was a Rajapaksa vanity project. 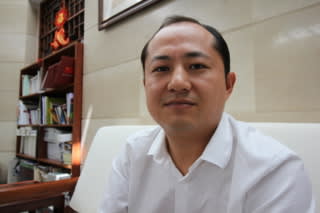 Qiu Xinli, chief of the political section at the Chinese Embassy in Colombo (Photo: Marwaan Macan-Markar)

The ruling coalition wants to end this drain on the country's economy. The cabinet has just endorsed a public-private partnership agreement with China Merchants Port Holdings, a state-run Chinese company, which will take an 80% debt-for-equity stake in a joint venture that will run the 1,500-hectare port. The government is hoping to recover $1.12 billion over the 99-year lease, and will look for more Chinese cash if plans are approved for a 6,000-hectare special industrial zone on an adjacent site.

The Chinese government is strongly supportive of the port, which Beijing sees as part of its ambitious Belt and Road Initiative for a network of land and maritime trade routes around Asia. "We want to help Sri Lanka build a transport hub and a logistics center," Qiu Xinli, chief of the political section at the Chinese embassy in Colombo, told the Nikkei Asian Review. "It is a good project, no matter which government is in power in Sri Lanka."

For Sri Lanka, giving a new lease on life to Hambantota port is a big step toward building a maritime economy, the ruling coalition's vision for the South Asian island. But it is also a crucial element in the government's attempts to build up its depleted foreign reserves in the face of a looming debt repayment crisis.

By 2019, the country needs to repay $3.99 billion to foreign creditors, compared with payments of $1.82 billion in 2016. Foreign reserves fell to $4.23 billion in November 2016, according to the International Monetary Fund, which warned after a visit to Sri Lanka in March of impending repayment problems. "Net international reserves fell short of the target, and progress on implementing structural benchmarks was somewhat uneven," the fund said.

Indrajit Coomaraswamy, governor of the central bank, regards the Hambantota deal as a "major plus" for the reserves. "This year, at least, we could get $400 million if the deal goes through," he said at a press conference after the cabinet announcement. A member of the bank's monetary board echoed a similar sentiment at the Ceylon Chamber of Commerce, the country's oldest business organization, saying, "The government wants to look at this transaction to address some of the broader macroeconomic issues, so the deal is not just about the port." 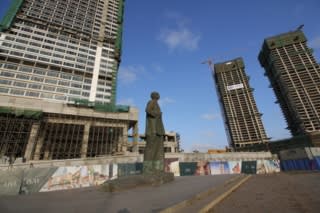 Coomaraswamy has set his sights on increasing Sri Lanka's foreign exchange reserves to $7.5 billion by the end of this year, part of which will be achieved through a planned $1.5 billion sovereign bond issue and a $700 million syndicated loan. "We are operating on a thin margin, and if there is some shock or volatility then there can be a crisis," the governor told the media.

The reserves recovered to $5.6 billion in February 2017, according to the central bank, but Sri Lanka will require $7 billion by 2019 to cover loans and bridge its rising deficit on the capital account of the balance of payments. According to the IMF, total external and domestic public debt amounted to 76% of gross domestic product at the end of 2015, the latest figures available, compared with 70.7% in 2014. About $8 billion is owed to China for loans secured by the Rajapaksa regime between 2005 and 2015. The loans, written at commercial interest rates, funded a raft of infrastructure projects, including Hambantota port.

The depth of Sri Lanka's looming economic crisis is illustrated by the deteriorating trade deficit, which grew from $8.4 billion in calendar 2015 to nearly $9.1 billion in 2016, according to the central bank. The deficit has been rising annually since 2013, when it stood at $7.5 billion. Earnings from Sri Lanka's narrow export base, largely restricted to garments and tea, fell by 2.2% in 2016, compared with the previous year, while imports rose by 2.5%.

The current account of the balance of payments is likely to be in surplus for the year, thanks to tourism earnings, which rose by 18% to $3.5 billion and remittances from Sri Lankan workers in the Middle East and other parts of Asia, who sent home $7.2 billion, a slight increase from the previous year. But the coalition government has had to stomach bad news about foreign direct investment -- despite boasts after a shock election victory two years ago that it would attract more international investors.

Sri Lanka's FDI record compares poorly with developing countries such as Vietnam and Myanmar in 2015. "In 2016, the investment climate [in Sri Lanka] was significantly affected by political uncertainty, policy uncertainty and tax uncertainties, because the coalition government was giving mixed messages," said Shiran Fernando, lead economist at Frontier Research, a Colombo-based think tank. "This negatively affected potential investments, since there were new players and new countries that showed an interest in Sri Lanka, but little of that materialized."

Nature has not spared the island, either. The worst drought in decades during the main rice cultivation season, which begins in the second half of the year, cut the 2017 harvest by 53% to 1.82 million tons -- a severe blow given that agriculture contributes 9% of GDP and employs 28% of the labor force. The department of census and statistics said in March that the drought -- and severe floods that preceded it -- would cut GDP growth to 4.4% for 2016, compared with 4.8% the previous year. The government had to dip into its depleted foreign reserves to import rice from Asian neighbors.

The fragility of the economy has been highlighted by the IMF, which approved a $1.5 billion loan to Sri Lanka last year to stave off a balance of payments crisis. "A more prolonged drought could raise food and oil imports with adverse impact on growth, inflation and the balance of payments," said Jaewoo Lee, head of the IMF mission to Colombo in March. But Lee kept the Sri Lanka government guessing over the release of the $119.9 million third tranche of the loan, which is due to be transferred in April.

The IMF bailout -- the only one currently being delivered to an Asian country, other than war-torn Afghanistan -- confirmed the country's economic malaise. "Having an IMF program is the equivalent of being in hospital," Coomaraswamy remarked during a January presentation of the central bank's overview entitled: "Road map for 2017 and beyond." He added: "We are not in the ICU [intensive care unit] but clearly in the hospital."

The government's efforts to balance the books have been praised by Fitch, the global credit ratings agency, which in February revised Sri Lanka's credit outlook from negative to stable, and confirmed the country's B+ sovereign credit rating. The agency praised the government for pushing ahead with IMF prescriptions, including raising value added taxes and reducing public spending to cut the budget deficit, which dropped from 7.4% of GDP in 2015 to 5.6% in 2016. There is new pressure however to reduce the fiscal deficit to 3.5% by 2020.

The government is also pushing ahead with restructuring state-owned enterprises -- also suggested by the IMF -- despite the risk of a political backlash. It announced in late March the first steps toward the privatization of "strategic assets" such as the Ceylon Petroleum Corporation, the Ceylon Electricity Board, the Sri Lanka Ports Authority and Sri Lankan Airlines, the national carrier. The IMF estimates the debts of these four state companies at $7.93 billion.

Finance Ministry officials have also discussed the sale of "nonstrategic assets" ranging from a five-star hotel to a hospital.

But will the government stay the course? It may have little choice, given the depleted foreign reserves and ticking debt clock. The Hambantota port deal has surfaced as a gauge of whether it will be possible to unload more debt-ridden state assets for dollars. No wonder, at some seminars in Colombo, speakers give the impression that the country faces an "SOS moment."