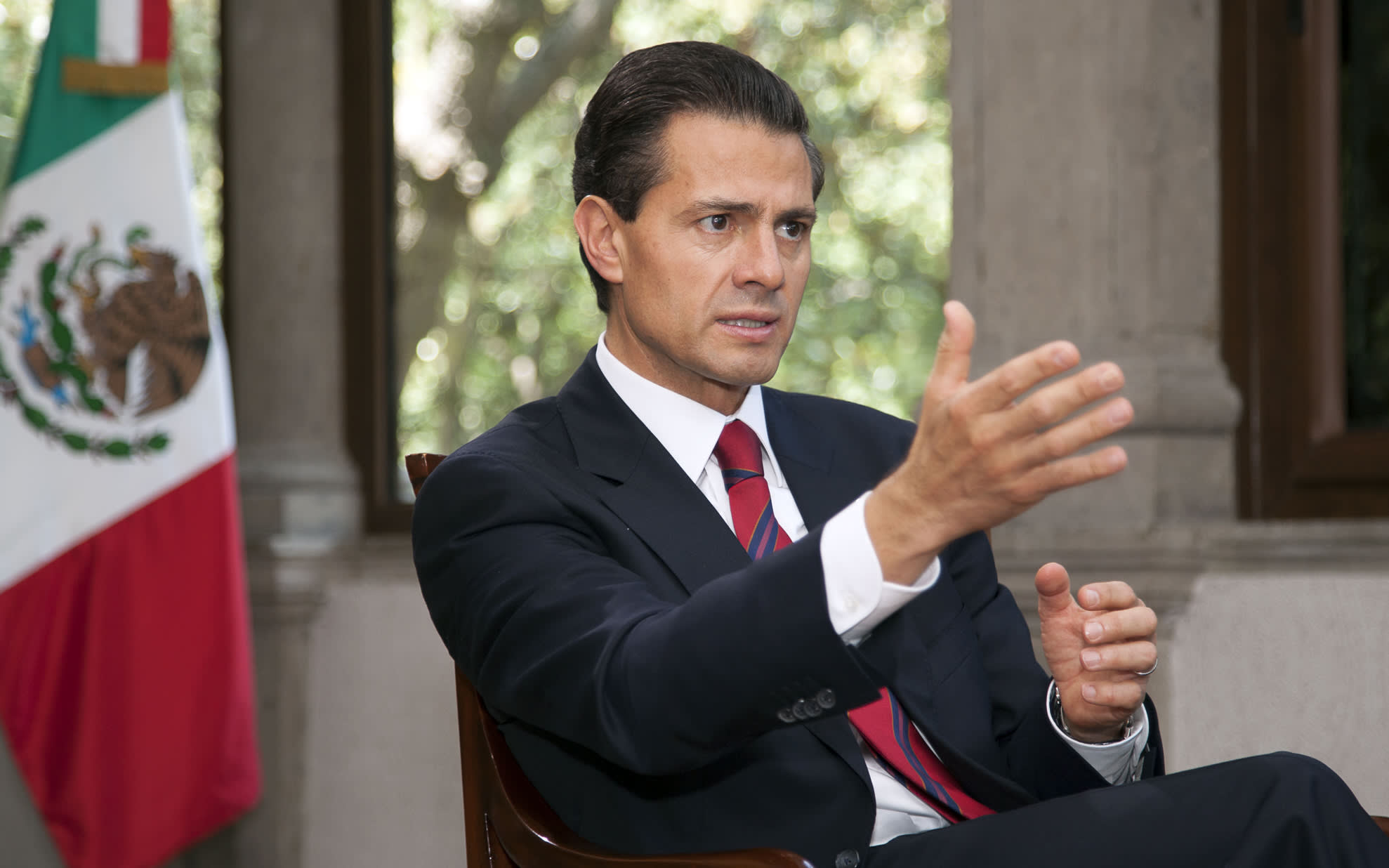 MEXICO CITY -- Mexican President Enrique Pena Nieto is highly hopeful that the newly agreed on trans-Pacific trade pact will help diversify his country's trade and benefit all member nations. He also told The Nikkei that Mexico is eager to expand exports to Asia.

Q: Twelve Pacific Rim nations have struck a deal on the Trans-Pacific Partnership (TPP). How will the TPP change the world economy? What kind of economic benefits is the TPP likely to bring to Mexico?

A: It took a very long time to negotiate the TPP. It has been a long-awaited deal. The TPP will create great opportunities for all signatory nations that will be integrated. The participating countries account for 40% of the world's total gross domestic product. The pact will allow Mexico to diversify its trade and economic relations, opening up a new horizon and giving much impetus to economic integration. It is a very important trade accord and produces a lot of benefits that will help promote the economic development of the region. All participating countries will be winners and benefit from the agreement. It will greatly stimulate trade and investment. It will also improve productivity and competitiveness.

Q: Some 80% of Mexico's exports go to the U.S. How are you going to bolster exports to Asia, which accounts for less than 10% of Mexico's total exports?

A: Mexico has forged many trade accords. We want to further diversify trade. We would like trade partners to trust us as an industrialized country. We hope to sell quality goods. We want to increase [exports] to Asia without setting any upper limit. Our agricultural and livestock exports have been growing about 9% a year. This demonstrates that Mexican products are in high demand. That's the case in Japan as well. The Japanese like our pork, avocados and melons. There is room for further growth. The presence of Mexican goods is going to increase.

Q: Mexico is the world's No. 7 auto producer. How is Mexico's auto industry likely to grow?

A: We don't want to set any upper limit on this, either. Mexico's auto industry possesses great potential, and there is room for further growth. Mexico's auto industry has moved up global ranks in terms of production and exports over the past three years. It might become the world's No. 5 in terms of production in 2020. Mexico's output is 5 million vehicles, and its automakers are competitive. If autoparts makers improve their productivity, the productivity of the auto industry will improve. The current expansionary trend is going to continue.

Q: The TPP might help increase shipments of autos built in Asia to North America. What is your view on this?

A: Mexico already has a strong auto industry. The important thing is to strengthen it further. Mexico's auto industry will set up supply chains by modernizing distribution networks. It has the capability to compete around the world. Cars built in Mexico will be competitive. They are known for their high quality.

Q: After becoming president in 2012, you have implemented various structural reforms. How are you going to go about energy reform?

A: The series of structural reforms will lay a foundation for Mexico's economic growth over the next several years. Energy reform will produce great benefits. As production of crude oil increases, prices will come down and reduce energy costs for consumers. There will be cost reduction for industry as well. It is going to be long-term reform. I intend to encourage the private sector to participate in crude oil development. We recently attracted numerous bidders, which was a great success. It will bolster the competitiveness of our nation.

Q: Foreign countries are concerned about public safety in Mexico. How are you going to deal with this problem?

A: Public safety's deterioration was worst in 2011. The crime rate has been declining since 2012 when I became president. I am continuing my efforts to make this country safe. But in certain areas of Mexico, violence sometimes breaks out. We intend to deal with the matter seriously. I fully understand that [improved safety] will make Mexico more attractive as an investment target.

Q: In Japan, the government of Prime Minister Shinzo Abe has been focusing on national security matters. What is important for Japan and Mexico in strengthening bilateral economic and political relations?

A: Mexico has respect for each nation's sovereignty. The Japanese government is pursuing policy that is good for Japan. The same thing can be said about the national security issue. Various Japanese companies trust Mexico and are investing in Mexico. Japanese automakers are especially important [investors]. Mazda, Toyota, Honda and Nissan have made substantial investments [in Mexico]. Over the last 10 years, production by Japanese automakers [in Mexico] has increased from 350,000 vehicles to more than 1.1 million vehicles. This has contributed much to economic relations between Japan and Mexico. The TPP is going to be important in cementing that relationship.

Q: What do you think of the restoration of diplomatic ties between the U.S. and Cuba in July?

A: The whole world welcomed it. Mexico is also happy about this. The U.S. and Cuba are geographically close neighbors so it is great that they reopen diplomatic relations. It will be a plus for the development of this region. We will collaborate with them in our economic activities. There should be a great opportunity for tourism.

Enrique Pena Nieto was born in 1966 in Atlacomulco, north of Mexico City. He obtained a master's degree from the Monterrey Institute of Technology and Higher Education. He joined the Institutional Revolutionary Party (PRI) in 1984. Between 2005 and 2011, he was the governor of the State of Mexico. He was elected president of Mexico in July 2012. In December of that year he took office, bringing the PRI back to power after a 12-year hiatus. Previously, the party had been in power for 71 years through 2000.

On his second day as president, Pena Nieto secured the 95-point Pact for Mexico, an agreement with two major opposition parties to push through educational, tax and other reforms. His economic reform measures won him international plaudits. He appeared on the cover of Time magazine in February 2014.