NAKHON RATCHASIMA, Thailand -- If all goes according to plan, Thai Prime Minister Prayuth Chan-ocha will make a media splash next year with the launch of a 60 kilometer stretch of dual-track train line between Nakhon Ratchasima and Khon Kaen provinces in northeast Thailand.

Work on the short spur -- part of a larger project to upgrade the region's freight transport to Thailand's main deep sea port -- is being speeded up to be completed before the next election. But whether the planned publicity stunt will win Prayuth's coup-installed government popularity in the country's poor northeast region remains to be seen.

Prayuth's government is banking on heavy investments in infrastructure to both stimulate growth during the current economic doldrums and strengthen Thailand's competitiveness in the future. While most economists concur that the expenditure on infrastructure is long overdue, some say a lot more could be done to help the country's rural poor in the short term. And most of Thailand's rural poor live in the country's northeastern region, known locally as Isaan.

Isaan was the only region to reject the draft of a military-guided constitution in the Aug. 7 referendum, with 51.4% of the people voting against it compared with a nationwide 61.40% endorsement. Isaan, accounting for one third of Thailand's 67 million population but only 10% of its gross domestic product, is also the power base of the Pheu Thai Party, whose de facto leader is Thaksin Shinawatra, the populist politician and the present regime's number one enemy. Prayuth and his officers originally came to power after a May 2014 coup, toppling Thaksin's sister, former Premier Yingluck Shinawatra.

Prayuth, using his sweeping powers under an interim constitution, has fast-tracked at least 20 megaprojects that will cost the country an estimated 2 trillion baht ($57 billion) over the next six years. Of that amount about 10% will be spent in Isaan -- primarily on a new motorway linking Bangkok to Nakhon Ratchasima, Isaan's largest city, and an expanded dual-track train link connecting Khon Kaen, Isaan's second largest city, to Nakhon Ratchasima and on to the port of Laem Chabang on the eastern seaboard southeast of Bangkok. A single track already exists, but is too congested to serve as an efficient freight link for the Isaan region to transport its main crops to markets abroad. A third megaproject, a so-called Sino-Thai high speed train between Bangkok and Nakhon Ratchasima, has yet to receive cabinet approval.

"The fact that the government is seriously interested in infrastructure is something, anyway, because if you trace the history we haven't been investing enough in infrastructure here," said Somchai Lertlarpwasin, director of the Bank of Thailand's North Eastern Regional Office. "If the government puts 200 billion baht in the region over six years, it's over 2% of the gross regional product in the northeast, so it means that you've lifted up GRP by 2% already, not even accounting for the crowd-in effects."

There have been some "crowd-in" effects already. Nakhon Ratchasima, also called Korat, is fast becoming a shopping paradise for people in the region and from farther afield in neighboring Cambodia and Laos. All three of Thailand's largest Bangkok-based department store chains have invested in massive outlets in the city, which will boast 1 million sq. meters of retail space by late next year. 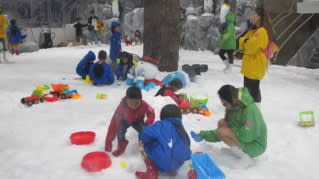 The Mall Korat's Snow and Ice Planet is a new tourist draw for the city. (Photo by Peter Janssen)

The Mall has had an outlet in the city since 1996, and recently invested 100 million baht to build an extension that includes a "Snow Zone," treating Issan customers to a winter wonderland of ice skating, sledding and snowball-throwing. The Mall's expansion was driven by increased competition, the advent of the ASEAN Economic Community earlier this year and the government's approval of the new motorway to the capital which will halve travel time to Korat to around 2.15 hours.

"Korat's prospects are bright. If the government had not committed to investing in infrastructure it might have been harder to persuade the board to invest in the expansion," said Preecha Limoua, general manager of The Mall's Nakhon Ratchasima Branch. The department store's Snow and Ice Planet is proving a new tourist attraction for the city. "Cambodian families are already coming here to see the snow. It is the only snow in Isaan."

Terminal 21, owned by Siam Retail Development, will open a 250,000 sq. meter outlet in December, boasting the city's first observation tower on the outside and a replica of the Eiffel Tower on the inside. Central Group plans to open a Central Grand Plaza outlet with 320,000 sq. meters of retail space in September 2017. The Mall Korat, with its snow zone extension launched in October, now occupies 360,000 sq. meters. There is also a Makro, eight Tesco-Lotus convenience stores and several Big C locations, while Sweden's Ikea and Japan's Aeon are both reportedly looking for locations in the city. Klang Plaza, a local department store chain that opened its first outlet in Korat 50 years ago, has three outlets already and is investing in a fourth near the city's railway station. The local chain, which operates under the motto "The Korat Department Store," is not afraid of the upmarket competition from Bangkok, given its strategy of concentrating on supermarkets and stationery supplies and keeping its outlets within walking distance from Korat's city communities. "Korat can handle 10 department stores," said Pairat Manasilp, vice president of Klang Plaza Company.

Korat province has a population of 2.7 million people, and a GDP of about 250 billion baht, the highest in Isaan. Only 250 kilometers northeast of Bangkok, Korat is an obvious gateway to the northeast and a logistical hub. It is already an industrial hub. U.S.-based Seagate Technology Company has a huge HRD disk drive factory in Korat, employing more than 12,000 people. The province is best known, however, as a hub for food processing using Isaan's main commercial crops -- rice, tapioca and sugar. Isaan accounts for half of Thailand's exports of the three crops, which employ more than 700,000 Isaan families.

In the long run, the dual track rail line running from Khon Kaen to Laem Chambang will provide a vital and cheaper transport link for these commodities that could make them more price competitive abroad.

"The problem with Thailand is transportation costs. We don't have efficient transport like trains," said Hassadin Suwattanapongchet, president of the Nakhon Ratchasima Chamber of Commerce. Rail currently accounts for only 2% of Thailand's goods transport, although freight is about half the cost of road transport per ton and is less polluting.

Work has commenced on the dual track line, but it will take four to five years before the connection to Laem Chabang port is completed. "That's a long time. People cannot imagine what it will be like in five years, so if the government can last for five years some people will be grateful," Hassadin said. Villagers to be displaced by the new motorway have long opposed the project, but their opposition has been silenced by Prayuth's edict.

While Korat's prospects look bright, the rest of Isaan is still suffering. Since last year, the region's farmers have been hit by a triple whammy of declining demand for their commodities in China, low commodity prices worldwide and drought. All commodity prices except sugar are down, while sugar cane has also suffered in the aftermath of the 2015-16 drought. The price of tapioca, which is exported mainly to China, has dropped from 2.30 baht per kilogram last year to 1.40 baht now. Other than short-term measures, such as paying cash to farmers to compensate for low prices, the government has seemed stumped by the challenges facing regional agriculture. For instance, the Federation of Thai Tapioca Growers has been urging the government to strengthen efforts to promote of the use of tapioca in ethanol fuel and plastics, but so far, the official response has been slow.

The region's rice, tapioca and sugar cane farmers were the target of populist measures under the previous two elected governments designed to boost their incomes. A controversial rice pledging scheme under Yingluck's government, promising to buy rice at 40% above market prices, was particularly popular but crashed down in scandals over corruption allegations. It seems unlikely that Prayuth's transport projects, due for completion years from now, will win him similar kudos. The former Army Commander-in-Chief has made it clear he would be willing to become prime minister after the next election, albeit as an appointed one.

"The government can invest in the motorway, or a high-speed train, or whatever, but the fact remains that most of the people here are farmers and the price of their crops -- rice, tapioca and sugar -- are low, so the people will have no money to drive cars on the motorway, or ride the high speed train, or shop in department stores," said Pornchai Amnuaysap, senior adviser to the tapioca growers' federation. "They will just stay at home and try to survive."