A man watches a news report on North Korea firing a missile that flew over Japan's northern island of Hokkaido and out into the Pacific Ocean, in Seoul on Sept. 15.   © Reuters

TOKYO -- If recent escalations in tensions ultimately culminate in a military conflict on the Korean peninsula, the U.S. and North Korea would not be the only countries to suffer -- at least in terms of credit-worthiness, the ratings company Moody's warns. Vietnam and Japan would be also be in the firing line.

More broadly, the simmering tensions could jeopardize otherwise upbeat prospects for growth across the region, the World Bank warned in its semiannual East Asia and Pacific Economic Update released Wednesday.

In the view of Moody's senior credit officer Martin Petch: "A protracted conflict would affect the credit profiles of sovereigns worldwide via a number of channels."

One obvious victim would be South Korea, and by extension, Vietnam. Many South Korean companies, such as Samsung Electronics and LG Electronics, have incorporated Vietnam into their supply chains, building factories in the country to take advantage of cheaper labor. 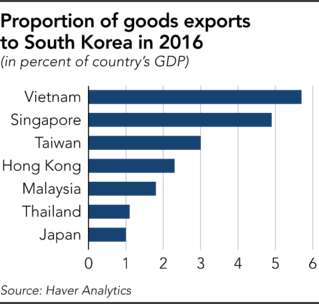 "Vietnam is the most vulnerable to any disruption to the global supply chain caused by a cessation or weakening of production in South Korea," Petch said.

Around 20% of Vietnam's intermediate goods imports come from South Korea. Vietnam's goods exports to South Korea account for more than 5% of the country's gross domestic product.

"Vietnam's policymaking institutions would likely face significant challenges in defining and implementing a rapid yet effective response" to a crisis, Petch said.

"The consequent reduction in nominal GDP growth would restrain scope for fiscal consolidation," Petch said, as increased military spending as a result of a protracted conflict could worsen Japan's fiscal position. Employees make their way to work at a Samsung factory in north of Hanoi.   © Reuters

Meanwhile, in its report Wednesday, the World Bank projected 6.4% economic growth for East Asia and the Pacific region in 2017. The report, however, used unusually stark language to outline risks to the positive outlook. Topping the list of geopolitical risks is the North Korean nuclear threat, which "could escalate into armed conflict," disrupting trade flows and economic activity.

The rising tensions have "the potential to affect the availability and access to external finance" for regional economies, World Bank Chief Economist for East Asia Pacific Sudhir Shetty said during a video news conference on Wednesday.

The multilateral lender rarely mentions geopolitical tensions in its economic updates. In fact, this is the first time the World Bank has emphasized the North Korean threat so directly, people familiar with the matter said.

It goes on to caution that "escalation of these disputes could have serious economic consequences," especially as the region plays a central role in global shipping and manufacturing supply chains.

This could "disrupt global trade flows and economic activity," the report says, adding that the subsequent volatility in global markets "would likely hamper [the region's] growth prospects."

For investors, such fears could trigger the "flight to safety" that often accompanies political crises, and could cause capital to flow out of the regional economies.

That could put pressure on exchange rates and global interest rates. Repercussions could include higher insurance costs for cargo ships operating in the region and a spikes in world commodity prices, the report warns.