TOKYO -- Legendary American investor Jim Rogers is "not optimistic" about the world's economic prospects. In his view, countries have propped themselves up artificially by printing too much money and accumulating huge amounts of debt.

The only solution, he told The Nikkei in a recent interview in Tokyo, is something neither politicians nor central bankers want to do.

Q: How do you assess the state of the global economy?

A: I am not optimistic about the global economy for the next couple of years. Japan is already in recession, some parts of Europe are suffering, some parts of America are suffering and that's going to get worse, in my view, because there is nothing to make the world get better. 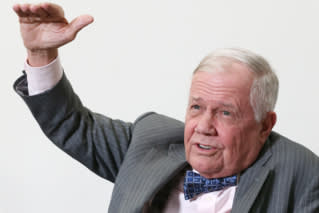 In America, we've had seven years since our last recession. That is unusual because in America, normally every four to seven years, throughout history, we have had an economic slowdown. So it's overdue. It doesn't have to end in seven years, but we have many excesses which have taken place in the world economy, caused by very low interest rates. And the American central bank is making many, many mistakes by having interest rates so low and by printing so much money. And then the Japanese central bank and the European Central Bank, and the British central bank, all did the same thing. So we've had an artificial situation based on printed money and huge amounts of debt. [The Federal Reserve's] balance sheet was $800 billion in 2008. Now it is nearly $5 trillion. I expect the American economy to be in recession sometime in the next year or two.

Q:If printing money is not the answer, what kind of economic policies would you like to see?

A: In the early [2000s], America had this kind of problem. America raised interest rates, America balanced the budget and had a horrible two years. But then America had the best economic decade in our history.

The world is going to have to face the problems and take the pain, and it's going to be painful especially in Japan. But you let people go bankrupt, you clean up the system and you start over.

Q:What is your take on China's slowdown?

A: Chinese trade with everybody and their trading partners are having problems. Japan is in recession, parts of Europe are in recession, Russia, India is slowing, America -- some parts of America are having problems. So when your large trading partners have problems, you have problems, if you deal with those countries. So, parts of the Chinese economy are going to continue to go down. China has debt now. In 2008, when we had a problem, China had a lot of money saved up for a rainy day and they started spending it, which helped save the world. But this time, China has a lot of debt, too.

Q:How do you rate the economic policies of Japanese Prime Minister Shinzo Abe?

I am sure Mr. Abe is a very nice person, a very smart person. But I don't think he is doing the right thing for Japan. Negative interest rates cannot work and will not work. There are several bureaucrats and academics who are trying negative interest rates, and they say, "Well, if we make people spend money, they think we will be OK." Well, it can't [work]. The way you build an economy is with savings and investing. Consumption is wonderful for a while, but you have to have a basis of savings and investing before you have the consumption.

Q:In the current circumstances, where would you invest?

A: I want to buy more Russian government bonds, short-term government bonds. They have very high yields in rubles -- not in dollars. I want to buy more Russian stocks, but I am too busy. If China's market goes down low, I would buy there. I am looking to invest in Kazakhstan, where there are very dramatic changes taking place, positive changes. It's difficult for an American still to invest in Iran, but the Japanese can and should be investing in Iran. There are some places in the world where good things are happening. [With] American stock markets near an all-time high, I don't want to buy [in] America.