In the casino business, the big profits come when nongambling elements are added to the mix, such as malls and concerts.(Photo: Bellagio in Las Vegas)
MOYURU BABA, Nikkei staff writerJune 16, 2017 20:48 JST | Japan
CopyCopied

TOKYO -- Japan is counting on a big tourism bump from the 2020 Tokyo Olympics, but the government wants to keep the numbers growing even after the sporting bonanza is over. One possible solution, it hopes, is by opening so-called integrated resorts -- leisure facilities that combine casinos, hotels, shopping centers and more under one roof.

Encouraged by the overseas success of these resorts, Tokyo hopes to bring some of that magic back home.

MGM Resorts International of the U.S. operates nearly 20 casinos around the world and generates annual sales of over $9 billion. From early on, the company has avoided depending solely on casinos for its earnings. Its facilities host a range of entertainment activities, including musicals and concerts by such big names as Queen and Lady Gaga.

The company's Bellagio complex in central Las Vegas includes a casino, theater, convention center, hotel and museum. The average visitor there spends over $900 a day, of which only about $180 to $270 goes toward gambling. 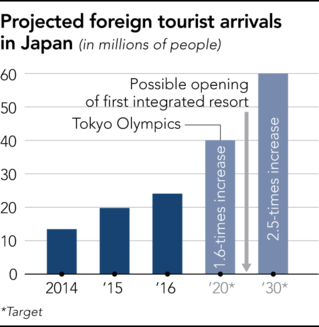 Most integrated resorts funnel their gaming revenue into other facilities that can pull in more visitors and more profit.

Geoff Freeman, president and CEO of the American Gaming Association, said all of the new casinos being built in the U.S. are integrated resorts. The market began exploding when operators realized that the biggest profits were not in the gambling operations but the other entertainment options.

At the forefront of this trend is Singapore.

Bo Bernhard, a professor of gaming at University of Nevada, Las Vegas, attributes the city-state's success with integrated resorts to having a clear vision from the start -- promoting itself as the most picturesque tourist destination in Asia.

When the government opened the Marina Bay Sands there seven years ago, it went to Bernhard for advice. Its cutting-edge design is a huge part of its appeal. An infinity pool at the top of the 57-story hotel is a hit, and tourists are always snapping photos in and around the eye-catching complex.

Given that integrated resorts have boosted Singapore's tourist numbers by an estimated 70%, is it no wonder that Japanese Prime Minister Shinzo Abe is pushing to open the country's first such facility in the mid-2020s.

He has expressed his desire to open a resort that is both family friendly and internationally competitive.

It will have to be if the government is to achieve its goal of boosting annual tourist arrivals to 60 million by 2030 -- a 2.5-fold increase from the 2016 level.

Japanese companies are already rubbing their hands at the potential opportunities.

Entertainment company Sega Sammy Holdings in April began operating an integrated resort in South Korea in partnership with a local casino major. With an eye toward taking the business back to Japan, the company has sent 35 "trainees" to South Korea to learn the ropes.

Sega Sammy's executive vice president, Koichi Fukazawa, said the key to ensuring the success of such an undertaking in Japan is to emphasize its "Japaneseness" -- a view shared by Bernhard. That means playing up elements that foreign visitors tend to be fascinated by, such as kabuki, anime, idols and onsen hot springs.

Still, the government's dream of a resort-driven tourism boom will likely remain just that unless governments at the national and local levels work out detailed strategies -- something that has yet to happen.