Observers are concerned about the relationship between Chinese President Xi Jinping, left, and Premier Li Keqiang, and who is in charge of the economy. (Photo by Akira Kodaka in Beijing in March)
KATSUJI NAKAZAWA, Nikkei senior staff writerJune 24, 2016 19:00 JST | China
CopyCopied

TOKYO -- May was a turning point in President Xi Jinping's power struggle against his political rivals.

In China's Communist Party, there are always fierce standoffs among high party officials over political and economic policy. But the ruling party is usually portrayed as monolith to the Chinese public and the outside world. Chinese media, backed by the party or the government, do not report on divisions among the policymaking elite.

That has not stopped one well-informed Beijing resident from tweeting: "Zhongnanhai in Beijing (China's political power center) had a turbulent time in May. It is right to say that the State Council (the cabinet) has faced disapproval for its economic policy." The feuds are often described as a behind-the-scenes battle, but President Xi Jinping himself brought the May dispute into the open.

The man who has played the lead role in airing the conflict is Liu He, director of the Office of the Central Leading Group for Financial and Economic Affairs. Although he is formally a rank-and-file member of the Communist Party Central Committee, he is widely recognized as an economic policy adviser to Xi and a highflying policymaker. 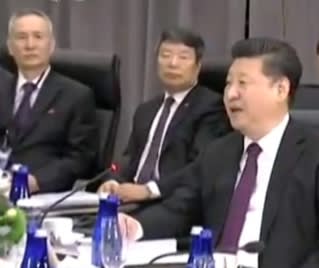 Liu He, who attended a U.S.-China summit in Washington on March 31, is seen, left, in this still image taken from China Central Television.

On May 9, the People's Daily, the party newspaper, carried a big front-page article discussing economic policy. The story took the form of an interview with an "authoritative figure." It was shocking in that the anonymous interviewee argued that if the government overreached with short-term stimulus it could inflate an economic bubble whose bursting would have serious consequences.

The interviewer, citing stronger-than-expected growth in the January to March quarter, asked whether China's economic prospects had brightened. The "authoritative figure" flatly ruled out the upturn scenario, saying China's economic growth trend will be L-shaped, rather than U-shaped, and definitely not V-shaped.

Such an L-shaped recovery is one stage and will not end in a year or two, he said. During the next few years, it will be difficult to fundamentally alter a situation in which the economy is saddled with weak demand and overcapacity. It will be difficult to bring economic growth back to the levels seen previously.

The argument is sound, but it is surprising because it is an indictment of government officials who are struggling with day-to-day business.

The "authoritative figure's" views are broadly similar to those of George Soros, the legendary investor who in January gloomily predicted a hard landing for China's economy. At that time, the Chinese government attacked that view vociferously. The article concludes by saying the Chinese leadership should carry out painstaking, long-term structural reforms, especially on the supply side.

The identity of the "authoritative figure" is more or less common knowledge. The Chinese media has carried an article virtually acknowledging Liu as the person in question, and internet censors have not pulled the article. Instead Liu is in the media limelight, with many news organizations running articles praising his achievements.

In mid-June, China Newsweek, a weekly magazine published by the state-owned China News Service, released an issue featuring Liu. The publication is mainly aimed at overseas Chinese and foreigners and is an important public relations vehicle of the Communist Party's propaganda department.

The comments of the "authoritative figure" have sent shock waves through the country. Up to now, there have been subtle differences in the messages from the State Council, which puts economic policy into practice, and the party leadership. What is happening now is much different. China's stock market quickly grasped the implications of the interview. The Shanghai Composite Index fell by 2.78%, sinking below 2,900 points, on the day the article was published.

"That article has taken issue with the State Council's macroeconomic policy," according to one Chinese economist. "The problem is that many people take a view that there is something more than a genuine economic controversy."

In a democratic country, the political opposition plays the role of scrutinizing and criticizing government policy in parliamentary debate. China's one-party state has no such mechanism. The party leadership, which stands above the government, issues directives to the government as necessary, but the party's actions are mostly kept secret.

The publication of the article was an exception. Xi, as leader of the party, has called on the government to rethink its economic policy, using a close aide and the party newspaper as his mouthpiece. The government's chief economic manager is Premier Li Keqiang.

The article casts the State Council in a negative light, painting it as a conservative body that makes minor policy tweaks but lacks the ability to make decisions and perform the political coordination needed to push through structural reforms. It has given failing marks to "Likonomics," as Li's economic policy agenda is called. The term itself is now empty because all authority has been concentrated in the hands of Xi. This raises the question of what Li is to blame for.

Some observers of Chinese politics call the standoff a "South-North war" because of the location of the two forces in Zhongnanhai, a complex of buildings in Beijing. The southern part of the complex is home to the party headquarters where Xi presides; the northern part houses the State Council, led by Li.

Another big move by the party predated the article's publication on May 9. On May 3, the People's Daily published a speech by Xi slamming the "careerists and conspirators existing in our party." He said: "We should not bury our heads in the sand and spare these members." The speech was actually delivered on Jan. 12 at a plenary session of the party's Central Commission for Discipline Inspection. It was the first time that the full text of a speech by Xi to the commission was made public.

In recent months Xi has faced a growing backlash from party members over what they see as the president's power-grab and a burgeoning personality cult, along with tighter media regulations. The first setback he has experienced in three years as party chief and president has made him prickly. Xi responded by having the tough speech he gave in January published four months later. Until then, the party's Publicity Department had refrained from releasing the speech for fear of creating political disruption.

The publication of the speech warning opponents against forming cabals against him was no mere bluff but signaled a major new offensive.

On May 30, Li Yunfeng, then vice governor Jiangsu Province, was detained. He had long served as senior secretary to Li Yuanchao, China's vice president and a member the Politburo Central Committee. Li Yunfeng forged close ties with Li Yuanchao when the latter was party chief of the province, and he came to manage all Li Yuanchao's political activities in Jiangsu, his mentor's hometown and political stronghold.

Li Yuanchao is the linchpin of the Communist Youth League faction, a massive political force within the party, though Premier Li Keqiang is the figurehead leader of the group. The youth league is a thorn in the side of Xi, who leads the so-called Princeling faction.

These three "incidents" were apparently masterminded by Xi. A "season of politics" has already started in China in the runup to the reshuffle of the party leadership scheduled for fall 2017. In this uncertain environment, some party members are concerned about whether Li will remain in office.

Another episode underscores Xi's ruthlessness. On June 15, Zhou Bin, the elder son of Zhou Yongkang, a former member of the Politburo Standing Committee now serving a life sentence, was sentenced to 18 years in prison, an extremely heavy sentence for a person involved in a case targeting his father.

Zhou Yongkang's second wife, a former employee of China Central Television, was also sentenced to nine years in prison. There are no signs that Xi and Wang Qishan, head of the Central Commission for Discipline Inspection, who is spearheading Xi's anti-corruption campaign, are easing up. They aim to make an example of such people to demonstrate what will happen to others who oppose Xi.

June 15 was Xi's 63rd birthday. There was no official press coverage because personal information about top government officials is considered confidential. This seems odd. Xi's birthday is an open secret and there were media reports that Indian Prime Minister Narendra Modi had offered congratulations to Xi on the WeChat messaging app.

Xi's government seems to have arranged for the court verdicts to be handed down on his birthday to impress the public with his sternness regarding corruption, and to frighten his political adversaries. Xi, who briefly appeared to have hit a snag, launched a major offensive in May. Yet, he has a long struggle ahead. There is still a year and a half to go before the party convention picks a new roster of top executives.