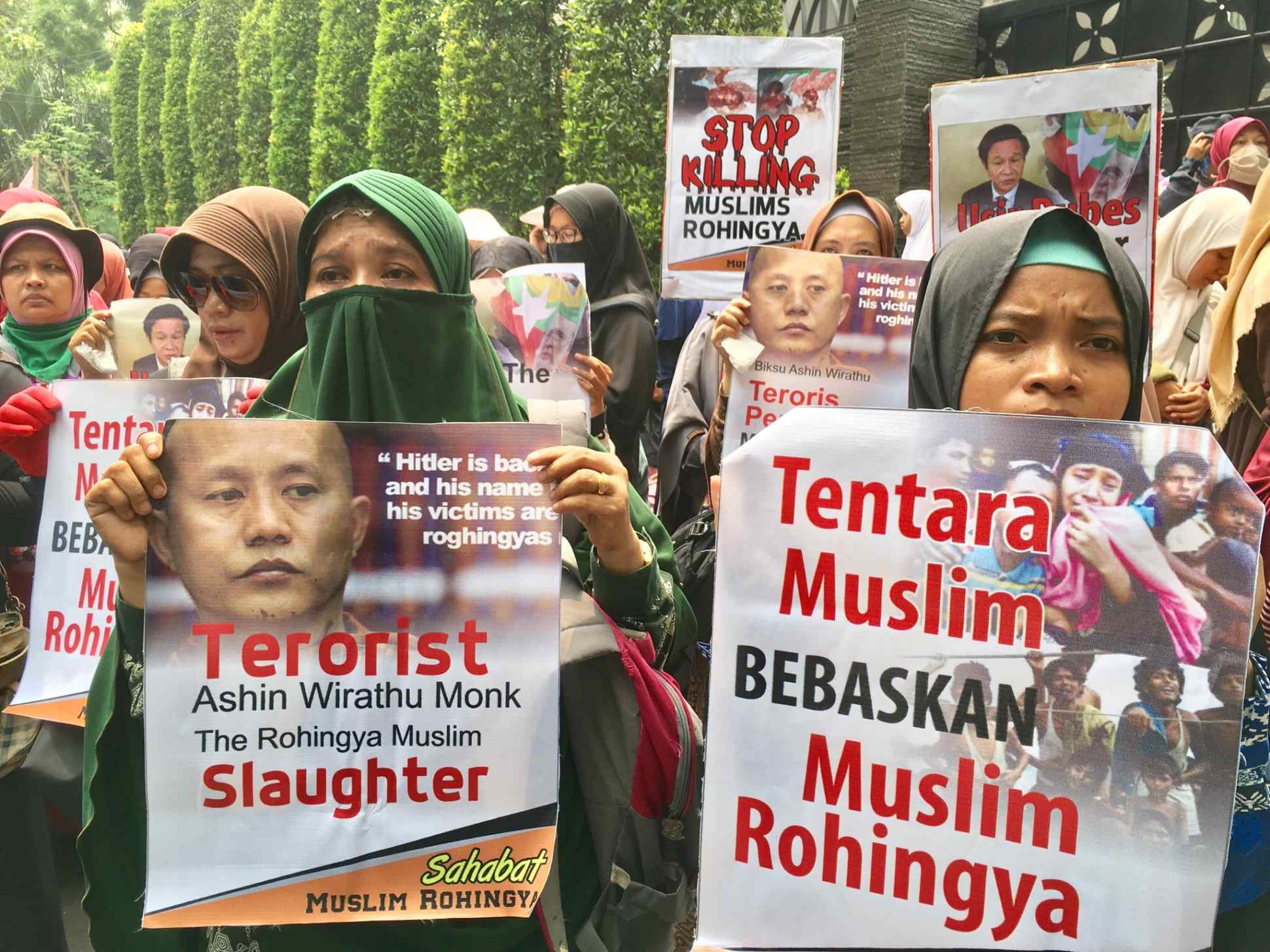 Indonesians protest against the violence inflicted on Rohingya at the Myanmar embassy in Jakarta on Sept. 4. (Photo by Bobby Nugroho)
Politics

YANGON -- International pressure is mounting on Myanmar over the escalating persecution of Muslim Rohingya in the western state of Rakhine, as Indian Prime Minister Narendra Modi is due to visit and hold talks with the country's de factor leader Aung San Suu Kyi.

Modi is expected to express his concerns over the flood of Rohingya refugees fleeing Myanmar when he meets Suu Kyi in Naypyitaw on Wednesday. The main purpose of Modi's visit is to strengthen economic and trade relations with Myanmar, seen as the last frontier market in the region, and counter China's growing presence across Asia. But the Rohingya crisis is also on his agenda.

India will join Indonesia and Malaysia in calling on Myanmar to rein in the violence that has forced over 73,000 Rohingya to flee to neighboring Bangladesh, based on figures from the UN refugee agency UNHCR. More than 400 Rohingya, Burmese military and police have died since Aug. 25 when a Rohingya militant group launched attacks on the police force. That attack killed 12 Burmese officials and led to fierce retaliation by the army and security forces.

India too is home to some 40,000 Rohingya refugees. Neighboring countries including Indonesia and Malaysia want the situation under control as they fear an influx of refugees from across the borders. Modi is also under pressure by Muslims in his country to call for Myanmar's army to stop these so-called "clearance operations." Modi is also said to be considering proposing economic cooperation in Rakhine State, home to most Rohingya.

Modi's visit comes on the heels of Monday's by the Indonesian Minister of Foreign Affairs Retno Marsudi. In talks with Suu Kyi, Retno made five demands, including that Myanmar exercises restraint on the use of force and protects all citizens in the country including Rohingya.

Indonesia, the world's largest Muslim country, is particularly sympathetic to Rohingya. On Monday, some 200 people, including women and children, protested the violence at the Myanmar embassy in Jakarta, with some holding placards urging the government to stop the killing. With a presidential election due in 2019, President Joko Widodo cannot afford to be seen not doing enough to support Muslims elsewhere.

Criticism of Myanmar and Suu Kyi from further afield are also growing louder. Turkey's President Recep Tayyip Erdogan said on Monday that the Rohingya humanitarian crisis should be discussed at the upcoming U.N. General Assembly meeting, which starts later this month. Turkey currently holds the presidency of the Organization of Islamic Cooperation.

The OIC strongly criticized the Myanmar government in a statement published on Aug. 29, saying that it "condemns the indiscriminate use of military force."

Nobel Peace laureate Malala Yousafzai also added to the calls for a cessation of violance on Monday. She tweeted "Rohingya people should be given citizenship in Myanmar, the country where they were born." She criticized Suu Kyi, also a Nobel Peace laureate, for not denouncing the persecution.

Rohingya are discriminated against by an overwhelming majority of the Myanmar population who are Buddhist. It is believed that Suu Kyi is refraining from intervening due to a wobbly support base at home and also a fragile relationship with the military.