SEOUL -- The verbal sparring and muscle-flexing by North Korea and the U.S. have entered uncharted territory in recent days as Pyongyang pushes Washington to negotiate as a peer and a fellow nuclear power.

In an address Tuesday to the United Nations General Assembly, U.S. President Donald Trump did not limit himself to criticizing the North Korean regime. He asserted that America would "totally destroy" the country if forced to do so to defend itself or its allies.

Kim Jong Un responded with what is the first direct statement by a sitting North Korean leader in the three generations of the ruling dynasty, according to South Korea's Ministry of Unification. 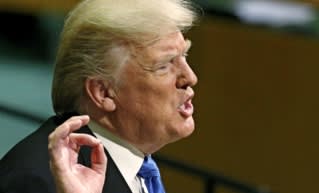 "On behalf of the dignity and honor of my state and people and on my own, I will make the man holding the prerogative of the supreme command in the U.S. pay dearly for his speech," he declared.

The Rodong Sinmun, the official newspaper of the ruling Workers' Party, carried the statement on the front page of its Friday edition. It specifically identified Kim as chairman of the State Affairs Commission, North Korea's top governing body, to position him as an equal to Trump and bolster his authority at home.

The North Korean leader also used Trump's speech to justify accelerating Pyongyang's nuclear and missile development. "Now that Trump has denied the existence of and insulted me and my country in front of the eyes of the world," he said, the North will "consider with seriousness taking a corresponding, highest level of hard-line countermeasure in history."

The "countermeasure" in question could take the form of a hydrogen bomb test in the Pacific Ocean, Foreign Affairs Minister Ri Yong Ho, who was in New York for the U.N. meeting, said Thursday.

If it does, North Korea may be looking to follow the example set by China. Beijing forced its way into the ranks of nuclear powers in the 1960s by conducting nuclear tests over the objections of the U.S. and the Soviet Union.

The current crisis began March 6, when North Korea fired four ballistic missiles into the Sea of Japan. Pyongyang called the launch a drill involving forces "tasked to strike the bases of the U.S. imperialist aggressor forces in Japan in contingency."

The U.S. demonstrated its might in April. By launching a missile strike in Syria in response to the regime's use of chemical weapons on its own citizens, as well as dropping a massive bomb on an underground Islamic State complex, Washington hoped Pyongyang would understand that it would not hesitate to use force if necessary. An aircraft carrier strike group and nuclear submarines were also dispatched to waters near the Korean Peninsula.

Shortly thereafter, Trump derided the North Korean leader as "Rocket Man," a nickname he used again in the U.N. address.

Over this period, the U.N. adopted two more resolutions imposing additional sanctions on North Korea, including one in September that restricted oil exports to the country.

The last few items on Pyongyang's to-do list are perfecting its ICBM, miniaturizing a nuclear warhead to mount on it, and deploying it as a strategic weapon usable against the U.S. If Ri's talk of a hydrogen bomb test proves accurate, that could be considered the culmination of the country's nuclear and missile development.

North Korea's options for getting a nuclear weapon to the Pacific are limited. Should the bomb be mounted on a nuclear missile, the projectile could travel over Japan, Japanese Defense Minister Itsunori Onodera told reporters Friday.

"It's believed that [North Korea] intends to miniaturize a nuclear weapon and carry out some sort of test using a long- or intermediate-range ballistic missile," Onodera said.

The U.S., the U.K. and France tested nuclear weapons in the Pacific in the 1950s and 1960s. Japanese still remember the radioactive "ashes of death" that rained on the Daigo Fukuryu Maru fishing boat after a U.S. hydrogen bomb test at Bikini Atoll in 1954.

International law has no provisions barring testing of nuclear weapons. The 1996 Comprehensive Test Ban Treaty, which would forbid all nuclear explosions, has yet to enter into force as a number of countries with nuclear technology -- including the U.S. and China as well as North Korea -- have not ratified it.

But experts note that Pyongyang could run into problems with other treaties. A hydrogen bomb test in the Pacific would "violate the U.N. Convention on the Law of the Sea, which reserves the high seas for peaceful use," said Shigeki Sakamoto, a law professor at Doshisha University.

Launching ballistic missiles into the ocean without stating where they are supposed to land or warning ships to leave the vicinity may also run afoul of international law. And any contamination of Japan's exclusive economic zone with radiation from a nuclear test could constitute a violation of Japan's sovereign rights under UNCLOS.

Some South Korean experts expect the North to complete its nuclear and missile development within the year, then start pressuring the U.S. in 2018 to sign a peace treaty officially ending the Korean War, using its newfound leverage as a nuclear power.

But completion of an ICBM that can reach the U.S. would cross a "red line" for the Trump administration. Washington could respond with such steps as redeploying tactical nuclear weapons in South Korea.

"Kim Jong Un of North Korea, who is obviously a madman who doesn't mind starving or killing his people, will be tested like never before!" Trump warned Friday on Twitter.