BEIJING -- China may be committed to resolving the North Korean nuclear issue through dialogue, but it is taking no chances. Sources say Chinese authorities are actively bracing for a possible clash between the North and the U.S., including plans for vast refugee camps near the border.

The government in the middle of this year instructed northeastern provinces, including Jilin and Liaoning, to start preparing to open camps that could absorb an expected influx of displaced North Koreans, according to Chinese Communist Party insiders. The sources said multiple planned facilities would have an estimated capacity of up to 500,000 people. Stockpiling of food and tents has apparently begun.

A purported internal file from state telecom operator China Mobile seems to support these claims. The document, which leaked online in early December, says five refugee camps are planned for Changbai County in Jilin, and that the company ran communications tests there on Dec. 2. The file has not been authenticated, but diplomatic sources suspect it is genuine, as it became inaccessible several days after its release.

Experts familiar with the China-North Korean border region also say barracks are under construction in a military-administered area of Jilin. These are low-rise buildings with communal showers for personnel.

Officially, the construction is meant to counter a growing number of thefts by North Koreans who slip across the frozen border river during the winter. But the authorities may have a real crisis in mind.

U.S. Secretary of State Rex Tillerson on Dec. 12 said his country has consulted with China about ways to handle refugees and contain North Korea's nuclear weapons if a conflict breaks out. "[T]he most important thing to us would be securing those nuclear weapons they've already developed and ensuring that they -- that nothing falls into the hands of people we would not want to have it. We've had conversations with the Chinese about how might that be done," he said.

The two sides are believed to have discussed these matters during the bilateral security dialogue in Washington in June. That was around the time Beijing issued the instructions on the refugee camps.

Tillerson also said the U.S. had assured China that, if American forces invade North Korea across the military demarcation line, they will withdraw once certain conditions are met. A North Korean lookout hut and a soldier are seen across the border from Liaoning Province in October. (Photo by Akira Kodaka)

Communist Party and diplomatic sources speculate that in an emergency, the Chinese People's Liberation Army would enter North Korea to seize nuclear and missile facilities. Some party members are cautious about this course of action, so the government is likely to wait and see what Washington and Pyongyang do first.

Still, there is no denying the growing sense of crisis in China.

Jilin is close to North Korea's nuclear test site. The Dec. 6 edition of the province's Communist Party newspaper, the Jilin Daily, ran a full-page feature headlined, "Knowledge about and protection from nuclear weapons." The piece included various illustrated instructions: close windows and doors if there is no time to evacuate, to reduce radiation exposure; when going out, wear surgical masks and coats; take iodine immediately; and so on.

Although the newspaper did not say why it carried the guidelines, they were widely regarded as precautions for an emergency on the Korean Peninsula. 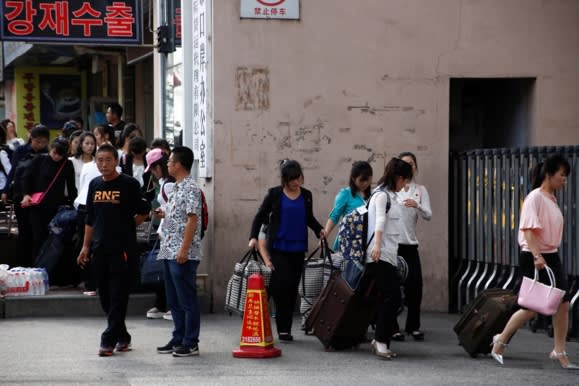 Chinese media quoted the paper's editors as saying the article was part of regular national defense education, and that the content was provided by the Jilin Province People's Air Defense Office. The province is said to be considering more evacuation drills with air raid alerts.

A PLA unit in the Northern Theater Command -- the zone that includes the border region with North Korea -- conducted a major exercise beginning in late November. Soldiers tested their weapons and other equipment to ensure they would function in temperatures minus 17 C.

From Dec. 11 to Dec. 16, China's air force conducted joint missile defense simulations with Russia, in preparation for a "sudden attack" by a third country. The Pyongyang Restaurant in Shenyang, Liaoning Province, is one sign of the flow of North Koreans into the area.   © Reuters

Experts say China is taking these steps to demonstrate its sense of alarm and discourage Pyongyang from making further provocations. Wang Hongguang, former deputy commander of the Nanjing Military Region, told a panel discussion on Dec. 16 that war could break out on the Korean Peninsula anytime between now and next March.

Why March? That is when the U.S. and South Korea conduct their annual joint military exercises -- drills North Korea condemns every time.

The Chinese military's official newspaper, the PLA Daily, last Tuesday carried an article titled "Will there be precursors to a U.S. military attack?" The article warned that if intimidation fails, American forces might pretend to halt an advance, only to suddenly launch strikes.