From front: Minamikojima Island, Kitakojima Island and Uotsuri Island are part of the Senkaku cluster, known as Diaoyu in China.   © Kyodo
Politics

TOKYO -- China has raised the stakes in the dispute over the Senkaku Islands in the East China Sea, crossing what has so far been a red line by sending a naval vessel into a contiguous zone.

A Jiangkai 1-class frigate in the early hours of June 9 made a surprise incursion into the 12-nautical mile (22km) band that stretches from the outer limit of Japan's territorial waters around the Senkakus.

The big question is: Why did China dispatch a naval vessel to the contiguous zone?

One Chinese security source said China did so to "exclude" Japan from the contiguous zone and to see how Japan would respond.

Japan administers the Senkaku Islands and considers them part of Okinawa Prefecture. China also claims the islands, known as Diaoyu in Chinese. The small group of uninhabited islets has been a source of tension between the two neighbors in recent years.

Now those tensions are escalating.

On Wednesday, a Chinese naval intelligence-gathering ship entered Japan's territorial waters off Kagoshima Prefecture, northeast of Okinawa, for about an hour and a half.

It was the first time in 12 years for a Chinese naval vessel to enter Japanese territorial waters.

There is a tense security drama playing out on the waters of the East China Sea. The first episode began June 8, around 9:50 p.m., when three Russian naval ships, steaming north, entered the contiguous zone near the Senkaku Islands. 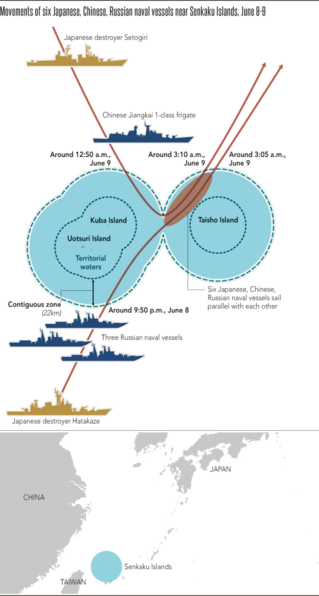 The Japanese Maritime Self-Defense Force destroyer Hatakaze quickly followed them into the zone. The Chinese Jiangkai 1-class frigate reacted immediately to the Hatakaze's entry into the contiguous zone and rushed into the area from waters north of the Senkakus.

Alarmed by the Chinese frigate's move, the Setogiri, another MSDF destroyer but operating in waters farther north, began to pursue the Chinese vessel.

The Chinese frigate entered the contiguous zone from the north, at a point northeast of Kuba Island, one of the Senkakus, at around 12:50 a.m. on June 9.

The Setogiri followed the Chinese frigate into the band of water and pursued the Chinese vessel while warning it not to violate Japan's territorial waters.

In the unprecedented drama, six Japanese, Chinese and Russian naval vessels sailed parallel to one another within the contiguous zone.

The Chinese frigate exited the zone at a point northwest of Taisho Island, another of the Senkakus, at around 3:10 a.m. The Russian naval vessels had left the zone about five minutes earlier.

Japanese Prime Minister Shinzo Abe received the first report on the Chinese frigate's entry into the contiguous zone at his official residence at around 1 a.m. on June 9, about 10 minutes after the entry took place.

After reporting the Chinese frigate's entry into the contiguous zone to Abe, Japan's Foreign Ministry filed a protest with a minister in charge of security at the Chinese Embassy in Tokyo. Less than an hour later, then Vice Foreign Minister Akitaka Saiki summoned Chinese Ambassador to Japan Cheng Yonghua to the ministry and lodged a protest.

The Global Times, a newspaper affiliated with the People's Daily, the mouthpiece of the Chinese Communist Party, reported that Japan violated the moqi, or tacit agreement, between the two countries regarding the territorial row.

Both countries are supposed to refrain from sending naval vessels into the contiguous zone under the moqi, but the Chinese frigate entered it after the Japanese destroyer Hatakaze first did so, the newspaper said.

There is no such tacit or secret agreement between Japan and China. Japan usually sends patrol ships of the Japan Coast Guard to operate within the contiguous zone around the Senkakus to avoid unnecessary friction that MSDF patrols might raise.

The Chinese government also claims that Japan once agreed to "shelve" the territorial dispute, a tactic meant to get Tokyo to acknowledge the existence of the territorial issue.

Japan's official position is that "there exists no issue of territorial sovereignty to be resolved concerning the Senkaku Islands."

"China has the option of allowing naval vessels of Russia, a friend, to enter the contiguous zone around the Diaoyu Islands, advocating 'freedom of navigation,'" a Chinese source said. "But if Japanese naval vessels enter, China must also send its naval ships there to exclude them. Otherwise, we will not be able to claim that we have undermined Japan's effective control of the islands."

This argument, if taken at face value, means that if the Hatakaze had entered Japanese territorial waters around the Senkakus to defend them, the Chinese frigate might also have intruded into the area, raising the risk of a military clash.

Some Asian experts on foreign and security affairs say the Chinese navy might have been reprimanded by the top echelon of the country's leaders had it not moved to counter the Hatakaze's entry into the contiguous zone around the Senkakus.

It should be noted that China in the autumn of 2012 began to claim that it "has undermined Japan's effective control" of the Senkakus.

China has continued to send official ships not only into the contiguous zone but also into Japanese territorial waters around the islands in response to the Japanese government's nationalization of them in September 2012.

Even if Japanese and Chinese coast guard vessels were to face off in the area, no war would immediately break out since military vessels would not be involved.

Some attention has been focused on whether China and Russia coordinated their naval vessels' operations.

The three Russian vessels that sailed through the contiguous zone did so after finishing a regular naval exercise; they were on their way back to their home port.

The Russian Embassy in Tokyo denied any operational coordination with China. But China and Russia have been conducting joint naval exercises in the Sea of Japan and the Yellow Sea since 2012. Given the two countries' current relations, it is safe to say that the Chinese navy at least had a rough idea of how the Russian ships would steam home.

On June 10, Japan, the U.S. and India kicked off the Malabar joint naval exercise in waters near Okinawa.

The Chinese and Russian naval vessels had been operating in the region to gather intelligence and to let their presence be felt ahead of the Malabar drills. The Russian vessels had lingered in the area despite being on their way home.

The U.S. and India first conducted the Malabar naval exercise in 1992. The current drills are Japan's first as a regular participant.

The U.S. aircraft carrier John C. Stennis -- which has been involved in U.S. operations to ensure freedom of navigation in waters claimed by China in the South China Sea -- is also taking part in this year's Malabar naval exercise.

China is paying close attention to the U.S. aircraft carrier.

Meanwhile, Russia, which has been stung by sanctions as it faces off against the West in the Ukraine, also wants to maintain and strengthen its presence in the Asia-Pacific region.

So we have Japan and the U.S. on one side with China and Russia on the other. While denying any operational coordination with China near the Senkaku Islands, Russia has not tried to prevent China from hinting at such cooperation.

Russia also wants to create a favorable atmosphere for President Vladimir Putin's planned trip to China at the end of this month for talks with President Xi Jinping.

During the eras of Mao Zedong and Deng Xiaoping, China at times skillfully exploited the Cold War between the U.S. and former Soviet Union. Now China may be taking advantage of its warm ties with Russia to flex its military muscle.

The Chinese military had another important objective in sending the Jiangkai 1-class frigate into the contiguous zone: It wanted to see how quickly Japan's government and Self-Defense Forces would respond. These structures are part of a new radar facility on Yonaguni Island, Okinawa Prefecture.

On March 28, Japan stationed some 160 coastal monitoring troops of the Ground Self-Defense Force on Yonaguni Island, the westernmost Japanese island in Okinawa Prefecture. It has a population of less than 2,000. A new radar base was set up to keep a close watch on aircraft and ships in the area. The island sits 150km south of the Senkakus.

By sending the Jiangkai 1-class frigate into the contiguous zone, China wanted to see how effectively Japan's new radar base functions.

The Japanese destroyer Setogiri, which pursued the Chinese frigate, had made a port call at Vietnam's strategic naval base in Cam Ranh Bay on April 12. The Setogiri arrived there after leaving Subic Bay in the Philippines and sailing across the South China Sea.

Vietnam and the Philippines are locked in fierce territorial disputes with China in that body of water.

During the Cold War, the navy of the former Soviet Union used the Vietnamese port. Today's reality is quite different. Now Vietnam purchases arms from the U.S. to counter China's military strength and allows Japanese MSDF vessels to make port calls.

Since Xi came to power, China's increasingly powerful navy has been accelerating its maritime advancements. But China must exercise self-restraint. Changing the status quo by force is extremely dangerous.

Japan and China should immediately kick off intensive discussions to establish maritime and air communication mechanisms as soon as possible. The mechanisms could help avoid an accidental clash.