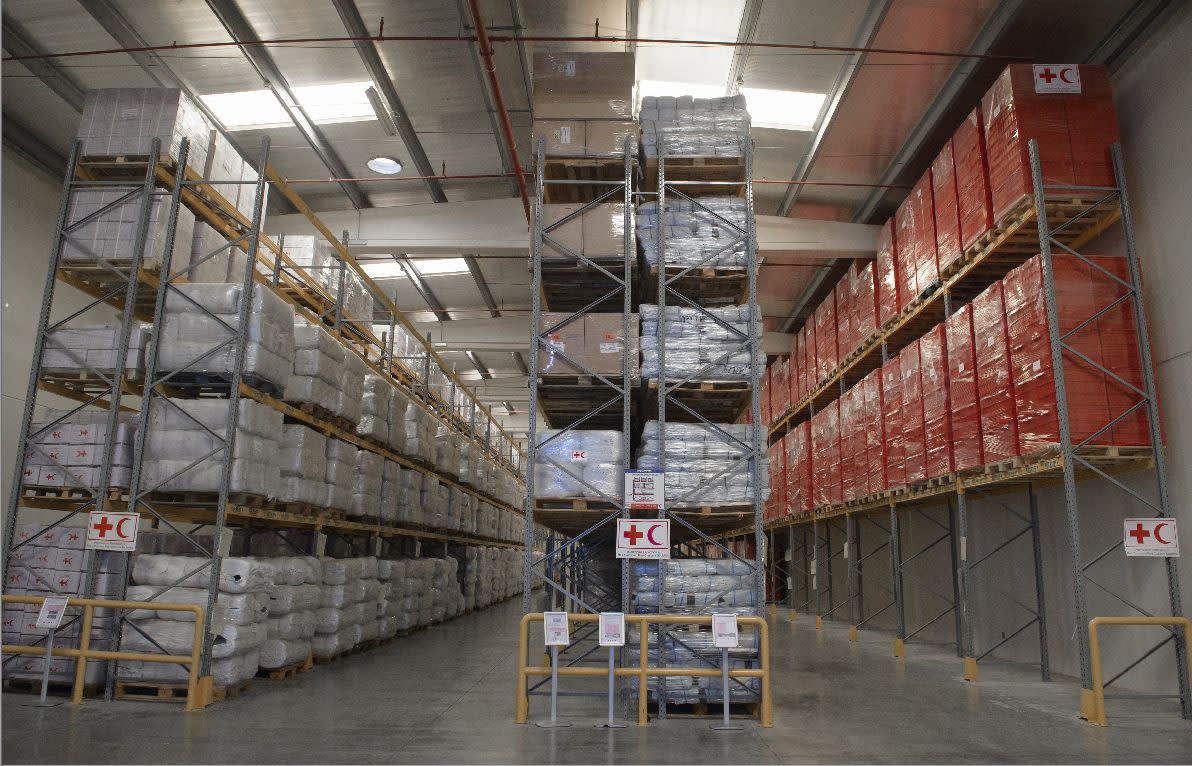 DUBAI -- In the desert, southwest of a cluster of skyscrapers that forms Dubai's central business district, a long stretch of hangars sit in the empty space between the emirate's airport and Jebel Ali port.

The warehouses are stocked with medical kits and boxes of high-energy biscuits. Outside, a mobile hospital vehicle sits on the tarmac, waiting to be dispatched at a few hours' notice to the as-yet-unknown location of the world's next humanitarian crisis. A map shows routes served by the International Committee of the Red Cross and Red Crescent from the Dubai International Humanitarian City. (Photo by Richard Juilliart, IHC)

This is Dubai's International Humanitarian City, a "free zone" where United Nations agencies and nongovernmental organizations can store goods and equipment for emergency dispatch to crisis areas. Officials behind the hub, which has sent aid to Asia, the Middle East, the Pacific islands and the Caribbean, hope it can play a vital role in coordinating global responses to growing numbers of natural and man-made disasters.

"Can you anticipate demand? I'd like to say that it's possible," said Giuseppe Saba, a former U.N. logistics expert and veteran of countless crises who advises the IHC on its operations.

Typhoon season in Asia is always likely to see a surge in emergencies, as is the hurricane season in the Caribbean. But there are always outlying events. When the 2004 Indian Ocean tsunami struck, aid had been prepared in Kathmandu in anticipation of an earthquake in Nepal, which did not come for another decade.

The response to large disasters can quickly become chaotic, as agencies, charities and governments rush to respond -- not always in the most efficient way. There is a constant tussle, Saba said, between what the emergency workers on the ground need and what donors want to send.

Senior staff at several leading non-governmental organizations told the Nikkei Asian Review that after Nepal's earthquake in April 2015, large donations of redundant supplies and unnecessary personnel added to the bottlenecks in delivering the aid that was needed, contributing to the chaos.

"Those high impact emergencies, you see always the same problem," Saba said. "Within 48 hours, three days, the airport is going to collapse because of all the traffic."

Founded by Dubai's ruler, Sheikh Mohammed bin Rashid Al Maktoum, the IHC was designed in part to solve the perennial challenge of coordinating emergency responses, as well as to give humanitarian agencies a practical base in an existing logistics hub, from which they can access crisis zones. The IHC, faced with growing demand, is about to embark on a tripling of its warehouse capacity. "In a way, this is a sad story," said Princess Haya bint Hussein, a former U.N. goodwill ambassador and Sheikh Mohammed's wife, who chairs the IHC. "It means that people don't see an end to things that are happening, which is in itself quite a depressing thought. I think we've got to break this circle of disaster, reacting, then allowing the situation to get worse."

Princess Haya insisted that humanitarian aid needs to evolve at both the operational and political levels if the sector is to overcome a growing skepticism among the public and world leaders.

"I think there's definitely fatigue among donors," Princess Haya said. "The amount of disasters is increasing. People are losing faith in agencies' abilities and NGOs' abilities to do anything other than keep coming back and asking for more ... There is a kind of a numbness, and there are very few feel-good stories."

At the same time, the need is rising. In December, the U.N. asked for an unprecedented $22 billion to respond to overlapping humanitarian emergencies worldwide. Haiti, which had barely recovered from a 2010 earthquake, was hit by Hurricane Matthew last year. A resumption of fighting in South Sudan, refugee crises in Central and West Africa and in Myanmar, and an earthquake in Indonesia's Aceh province in December all added to the multifarious challenges presented by conflicts in Syria, Iraq and Yemen.

The Asia-Pacific has borne the brunt of a worldwide increase in natural disasters over the past few decades. Throughout the region there are population centers on geological fault lines, along flood-prone rivers or in coastal regions that are vulnerable to typhoons. Floods and extreme storms -- so called hydrological and meteorological disasters -- are widely believed to be increasing in frequency as global temperatures rise. At the same time, populations are becoming more vulnerable as they crowd into megacities.

Japan is the only significant Asian donor to global humanitarian assistance, giving around $900 million a year. China, the world's second-largest economy, gives about $80 million a year, on average, and South Korea about $35 million, according to official figures.

But these apparently low numbers can be misleading, said Barnaby Willitts-King, a research fellow at the Overseas Development Institute, a think tank. Workers from the International Committee of the Red Cross and Red Crescent load aid supplies at the Dubai International Humanitarian City. (Photo by Richard Juilliart, IHC)

"There's such a focus on this $22 billion figure, and the response of the World Food Program and UNHCR (the office of the United Nations High Commissioner for Refugees), so we see the world through that lens," Willitts-King said. "But there's enormous amounts happening ... it's just not captured in the international picture."

For example, the 10 member countries of the Association of Southeast Asian Nations are increasingly well-coordinated and able to resolve local challenges, while other countries get involved through bilateral donations or by supplying personnel to relief efforts, he added. Chinese military and civilian teams, for example, were heavily involved in the response to the Nepal earthquake and to an Ebola outbreak in West Africa in 2013.

"We've got to get much better at recognizing a broader tent of ways that countries want to respond, because otherwise we're going to continue to have these very uncoordinated responses," Willitts-King said. "We're seeing increasing numbers of donors, whether it's from the Gulf, China, Asian states, playing a much more assertive global role. Their first instinct is not to follow the U.N. system."

The international aid sector needs to recognize these efforts and to stop focusing so much on monetary donations, said Princess Haya. Calculating how much money each country throws at crises has been used as a way to shame -- and often alienate -- reluctant donors in Asia and the Middle East.

"We have a very static and nearly cosmetic approach to what we require. In the end, everybody is judged by how much money [they give]," she said, emphaizig the importance of identifying what countries can give and how they can best contribute.

Princess Haya said her native Jordan, for example, struggles to give cash, but contributes large numbers of peacekeepers to support relief operations. Dubai, through the IHC, can offer its logistical expertise and resources.

That approach, allowing everyone to bring their own ideas, expertise and technologies to the table, could reinvigorate a sector that needs an injection of hope.

"We've got to get really innovative about aid. We've got to look at really smart solutions. And innovation in the humanitarian sector has been very slow," Princess Haya said. "It's a traditional group of people. They represent governments who do things in a very traditional way," she added. "Problems in the world keep getting worse, and we're still reacting in the same way."