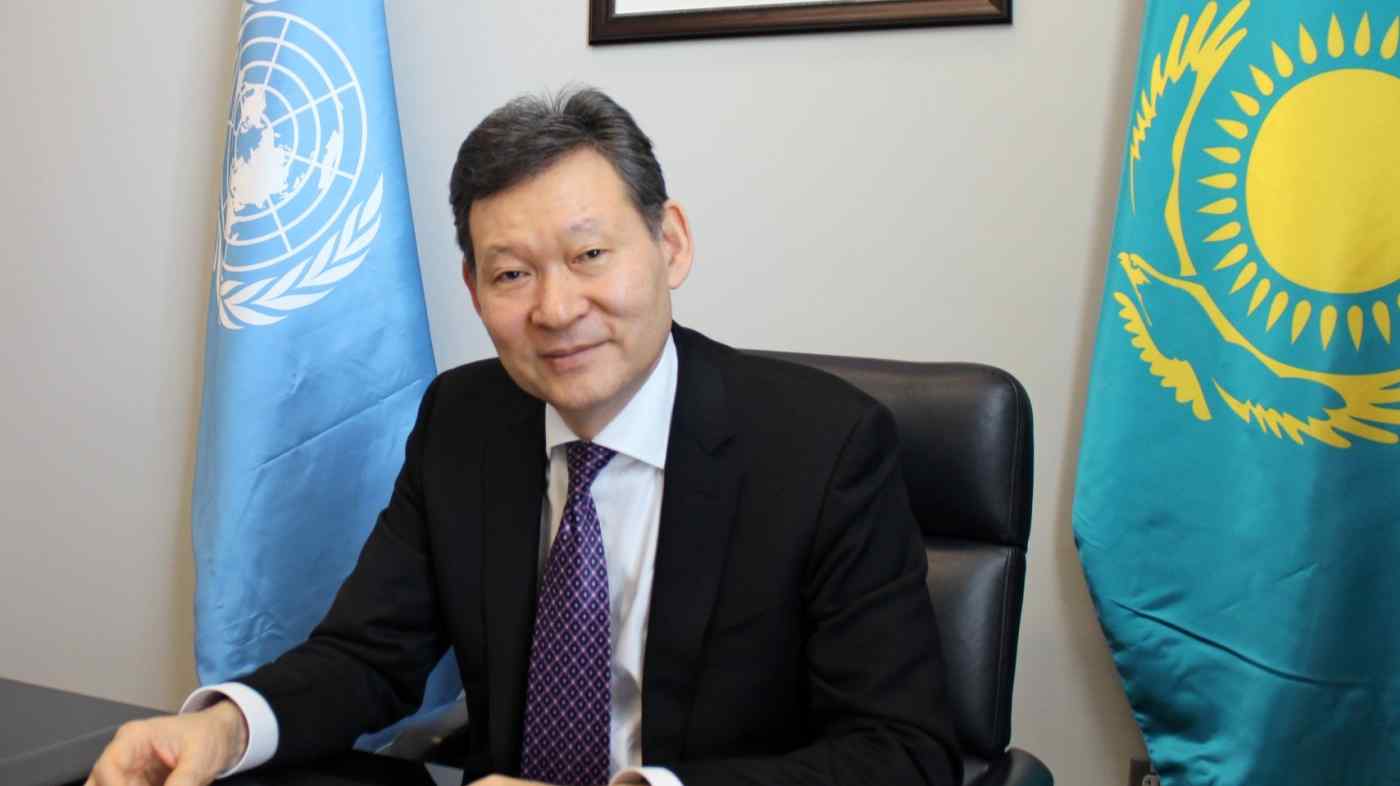 UNITED NATIONS -- Few nuclear powers have ever volunteered to dismantle their arsenals, but Kazakhstan's U.N. ambassador makes the case that a country stands only to gain by such a dramatic gesture.

Kazakhstan, which once held the fourth-largest nuclear stockpile with over 1,400 warheads, relinquished all of these Soviet-era weapons by April 1995.

"With the time passing, we more and more are convinced that that was a very right decision at the right moment," Kairat Umarov, the ambassador and current president of the Security Council, told the Nikkei Asian Review in a recent interview. "And today we are very much proud of this decision," he said, because Kazakhstan "gained a lot from this step."

When Kazakhstan began its term as rotating Security Council president for January, it became the first Central Asian nation to hold that seat. This nonpermanent spot on the Security Council served as a big diplomatic boost for Astana, which also has gained influence in recent months as the site of Russian-led negotiations on the conflict in Syria.

This has been an ideal time for Kazakhstan to take the global stage and garner international respect, as fears of nuclear catastrophe reach their highest since the end of the Cold War.

Kazakhstan is no shining example of Western democracy, as President Nursultan Nazarbayev has ruled since gaining power nearly 30 years ago after the breakup of the Soviet Union. Yet the country's warm reception by the international community and relative economic strength contrast starkly with North Korea, a global pariah under heavy sanctions for its illegal nuclear weapons development. Kazakhstan has made a sweeping recovery since its independence in 1991, when, according to Umarov, there was "zero money in the budget" and inflation reached 2,000%.

Amid that hardship, the country chose to denuclearize "because [Nazarbayev] said we should be known to the world not through the nuclear capacity but economic might," Umarov said, arguing that Kazakhstan now stands as one of the most advanced economies in the region.

"We have a growing GDP per capita rate. Our economy today is very strong. We have a stable country [with] quite an ambitious goal to become one of the ... 30 most advanced countries in the world," the ambassador said, noting global investments and trade. "We think if you show goodwill, other countries will meet you on this."

Nazarbayev was widely applauded for his decision to disarm when the president chaired what he called the "flagship event" of Kazakhstan's Security Council presidency, a Jan. 18 discussion on nonproliferation and confidence-building measures. That meeting also was attended by Poland's president as well as foreign ministers and cabinet-level representatives such as Russia's Sergey Lavrov and Nikki Haley, the U.S. ambassador to the U.N.

"The nuclear-free status of Kazakhstan may serve as an example and as practical guidance for other countries," Nazarbayev said at that meeting, noting the "high international standing" his country gained by renouncing nuclear weapons. "We call upon all other states to follow our example. We called upon Iran to do so. Now we call upon North Korea to do so."

"One thing we know for sure: Nuclear capability is not a good defense," Umarov told The Nikkei. "It's not a good way to protect a country."

Possessing such weapons makes a country a target for other nuclear-armed nations, the ambassador added. "So that's our experience, and we think that anything can be avoided if there is enough political will," he said.

Umarov said attempts to persuade his North Korean counterparts of the merits of denuclearization have not been fruitful. "But at the end of the day, we think that it is political courage of leaders which really makes things different," he said. A decision by North Korea to denuclearize would be "received with applause in the international community."

"We right now have 1.5 million people who are suffering from the nuclear testing site," Umarov said, citing genetic deformities that have plagued the population and continue to affect newborn children -- three generations later.

"It is a very acute, sensitive issue for us," Umarov asserted, recalling his work for a nongovernmental group in which he fought to shut Semipalatinsk. "So it's not just we are playing with the politics, or trying to show that we are so principled because of political reasons. It is a very real thing with our population, with our people, and we are reflecting here the will of the people on that issue."

Kazakhstan harbors no resentment toward those responsible for the suffering its people continue to face, Umarov said, suggesting the Cold War politics that created the site are a thing of the past.

"But we shouldn't allow it to happen in the future," he said. "That's why we're so vocal about it. That's why we are talking about it, publicly, loudly, and there shouldn't be any doubt about our position."

Umarov quoted Nazarbayev in saying "it is our moral right to ask other countries to follow a non-nuclear path."