India and Vietnam to strengthen defense ties against assertive China 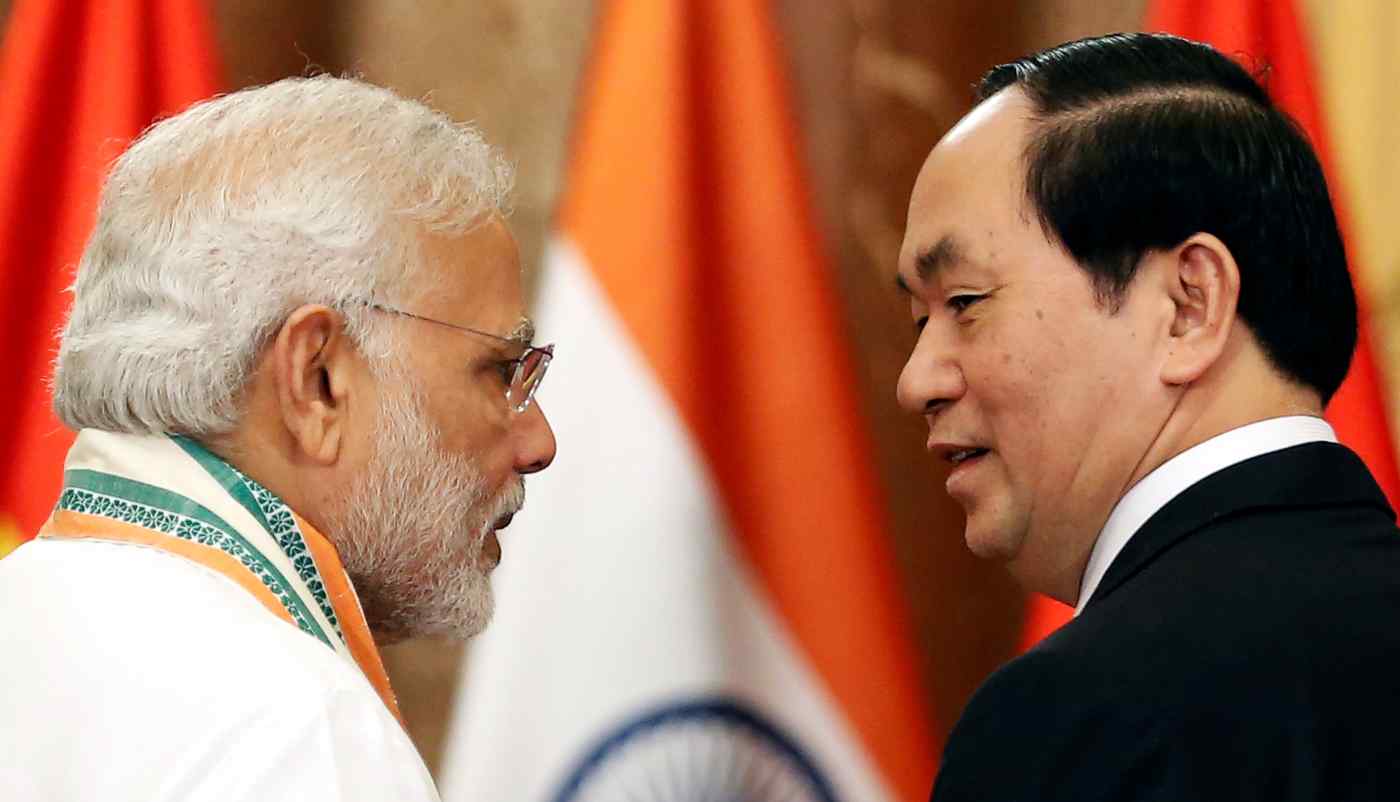 NEW DELHI -- Defense and maritime security cooperation are expected to top the agenda during Vietnamese President Tran Dai Quang's three-day visit to India this week, as both countries strengthen their partnership to ward off China's growing influence.

Tran will land in India on Friday, the start of his visit, and is scheduled to hold a summit with Indian Prime Minister Narendra Modi. He will also meet with other members of the government.

It is understood that a key discussion topic will be the South China Sea, which "remains complicated," Vietnam's envoy to India Ton Sinh Thanh was quoted in local media as saying. Both countries are also expected to sign a civil nuclear cooperation pact and discuss ways to boost trade ties.

Tran's state visit comes more than a month after Vietnamese Prime Minister Nguyen Xuan Phuc traveled to New Delhi for the summit between the Association of Southeast Asian Nations and India.

Over one-third of global trade passes through the hydrocarbon-rich South China Sea. China has overlapping territorial claims with Brunei, Malaysia, the Philippines, Vietnam and Taiwan in the area. Hanoi, however, has been the most vocal in raising its concerns over Beijing's assertive territorial claim as well as its move to build artificial islands.

In an interview with local PTI news agency ahead of his visit, Tran called for the strengthening of India-Vietnam maritime ties, and identified defense, security and trade as effective strategic areas of cooperation.

Both countries, he said, "are endowed with advantages to develop maritime economy. In this regard, we could increase information exchange and share experience in formulating maritime strategies." 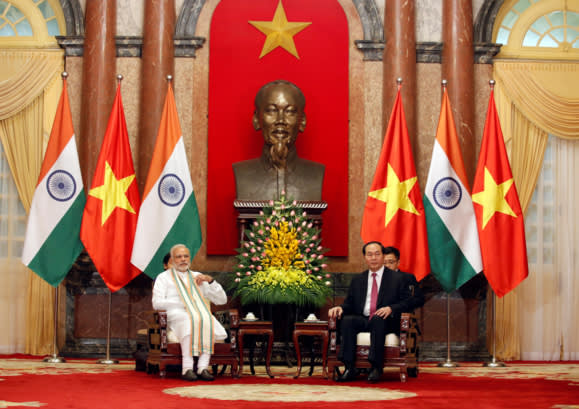 Some in India see Vietnam as a strategic counter-balance to China, and at the same time feel Hanoi too needs New Delhi to safeguard its interests.

"Vietnam wants to engage India in a more open way due to its concerns [over Chinese expansionism], with maritime security, defense technology, defense manufacturing and lines of credit" being the focus areas in bilateral ties, said Pankaj Jha, a professor of defense and strategic studies at O.P. Jindal Global University, a private university, and former research director at the Indian Council of World Affairs.

Jha said that with regard to the South China Sea, Vietnam has very basic infrastructure and wants training, equipment and assistance from India. "They want electronic surveillance capability in those islands so that they can forewarn themselves in case of an adventure by China," Jha said.

Vietnam, he pointed out, also has some links to the so-called Quad -- the quadrilateral security dialogue between India, Japan, Australia and the U.S. "This Quad is an insurance against any Chinese adventure. With Japan and India [with which Hanoi has strong ties] being part of the Quad, Vietnam has very positive outlook toward future." 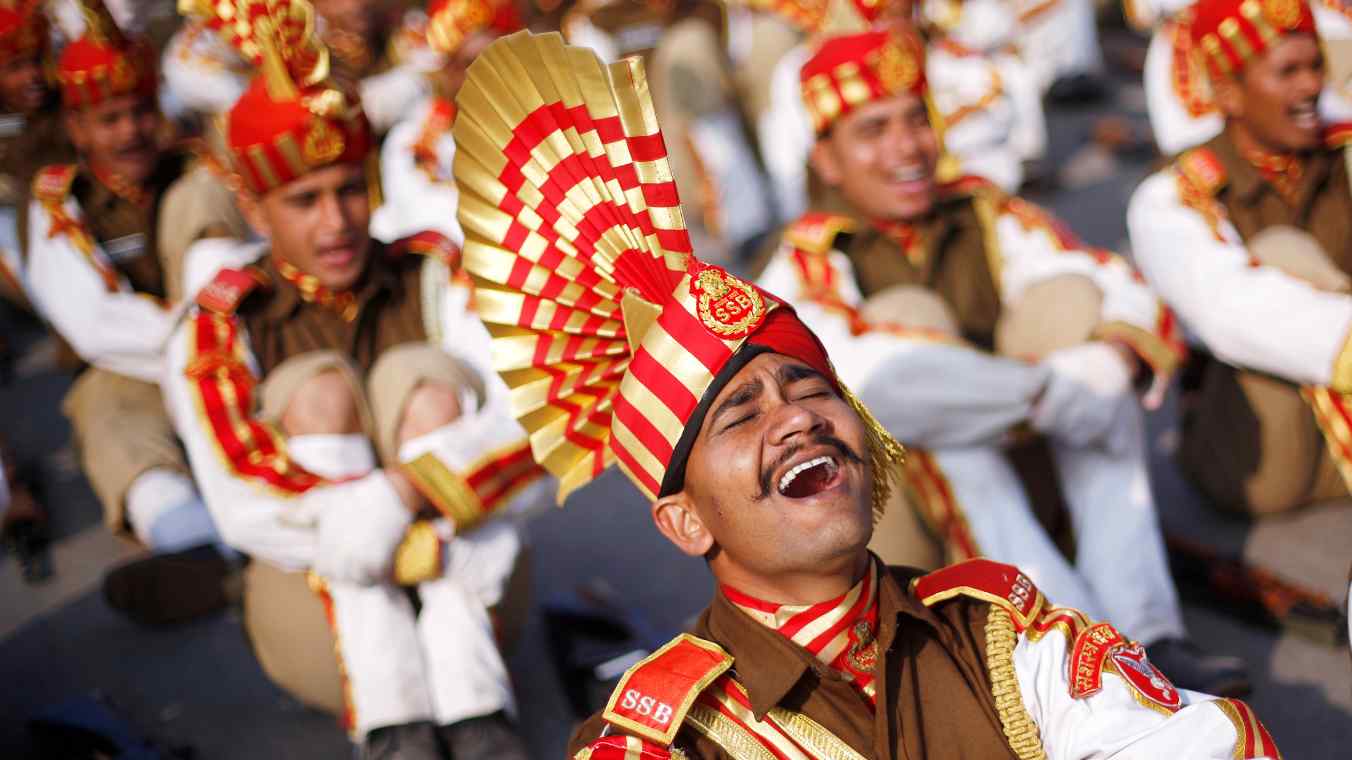 Modi visited Vietnam in September 2016 and offered a $500 million credit line to Hanoi for defense cooperation. It was the first time in 15 years that an Indian prime minister visited Hanoi for bilateral talks. His predecessor Manmohan Singh traveled to Vietnam in 2010 for the India-ASEAN summit.

Modi's visit signaled India's support for Vietnam that is under increasing pressure from Beijing over the disputed islands in the South China Sea. In a statement during that visit, both sides reiterated their support "for peace, stability, security, safety and freedom of navigation and overflight, and unimpeded commerce."

India is also concerned about China's attempts to widen its influence in the Indian Ocean, and has carried out joint military exercises with the U.S. and Japan, apparently to counter Beijing's bid to expand its naval sway.

Following Tran's visit, Vietnam will participate in an eight-day naval exercise to be hosted by India from March 6. Those taking part in the biennial event in the Andaman and Nicobar Islands include Australia, Malaysia, Myanmar, New Zealand, Thailand, Sri Lanka, Singapore, Bangladesh, Indonesia and Cambodia.

Indian media reported that China's attempts to widen its influence in the Indo-Pacific region will be raised during the exercise.