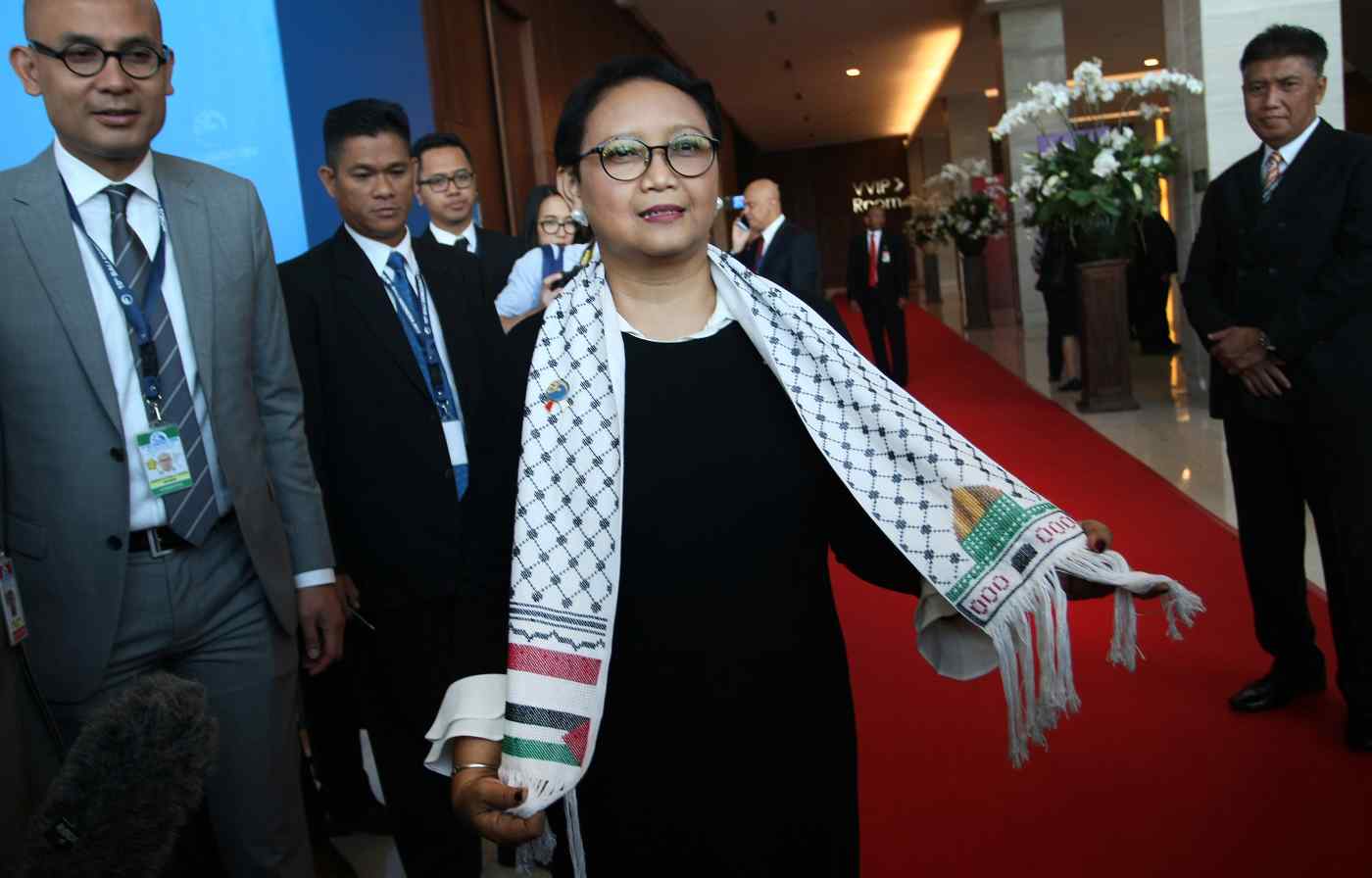 JAKARTA -- Indonesian Foreign Minister Retno Marsudi highlighted Indonesia's expanding role in tackling problems in the Muslim world in her New Year speech on Tuesday, in a sign of the country's growing global ambitions as it leaves behind an image of insularity.

Marsudi's remarks implied Indonesia's ambition to become a torchbearer of the Muslim world. More so than many Middle Eastern nations, Indonesia, home to the world's largest Muslim population, has grown increasingly vocal against the persecution of the Rohingya Muslim minority in Myanmar and against the Palestinians in Israel.

President Joko Widodo has seized on recent troubles faced by Palestinians and Rohingya to offer his support, and in turn woo Muslim voters at home by his show of camaraderie. Despite remaining constitutionally secular, Indonesia has been witnessing an increase in Islamic conservatism following the fall of dictator Suharto in 1998. So far, this seemed to have worked against Widodo, with rampant rumors and smears questioning his Muslim identity.

Indonesia was among the first few countries to criticize a "new cycle of violence" in Myanmar's Rakhine state that began in August that had forced hundreds of thousands of the Rohingya people to flee the predominantly Buddhist nation to neighboring Bangladesh. Marsudi went to see Myanmar's de-facto leader Aung San Suu Kyi as soon as news about the Rohingya plight erupted in an attempt to mediate.

In December, following U.S. President Donald Trump's recognition of Jerusalem as the Israeli capital, Widodo was quick to issue strong condemnation of the U.S. move and called for an extraordinary meeting of the Organization of Islamic Cooperation that was held in Istanbul later the same month.

"Palestine is in the heart of Indonesia's foreign policy. The fight for Palestine is in every breath that [we] take in Indonesia's diplomacy," Marsudi said before foreign diplomats and leaders of national publications at the Foreign Ministry headquarters in Jakarta on Tuesday. "Indonesia again calls on countries across the world to keep lending their support for Palestine."

Marsudi said Indonesia has been providing not just political, but also humanitarian and economic support for Palestinians and the Rohingya. She cited the ongoing construction of an Indonesia-funded hospital in Rakhine, as well as Indonesia's zero-tariff policy on Palestinian exports.

Indonesia has offered aid even to Afghanistan -- although to a smaller degree -- in education and capacity-building support. "I did a work visit to Kabul last November, which was the first bilateral visit by an Indonesian foreign minister in more than 50 years," Marsudi said.

At the start of Widodo's presidency, the administration's foreign policy was seen as being inward-looking. But the government has now shown increasing interest in regional and global affairs.

Marsudi's New Year speeches in previous years had largely focused on advancing Indonesia's "economy diplomacy," where diplomats were expected to help Indonesian businesses expand outside the country and lure foreign investors to the country.

On Tuesday, however, Marsudi asked countries to support Indonesia's nomination for a non-permanent seat in the United Nations Security Council for 2019-20. She said Indonesia has been intensifying its campaign through increased participation in international organizations.

"Membership in the U.N. Security Council should not be about how big or how small a country is," Marsudi said, adding Indonesia ranked 9th in the number of troops sent on U.N. security missions. "What needs to be made sure is the country's track record and commitment to contributing to world peace."

Marsudi said also that Indonesia was throwing its weight behind the "Indo-Pacific" concept, which is expected to entail enhanced maritime, security and economic cooperation between countries on both sides of the Indian Ocean. The idea has been advocated by the U.S. and Japan amid China's expanding clout in the region, but Marsudi asserted that relevant talks should not be based on "suspicion and perception of threats."

She called on other members of the Association of Southeast Asian Nations to actively participate in Indo-Pacific talks.