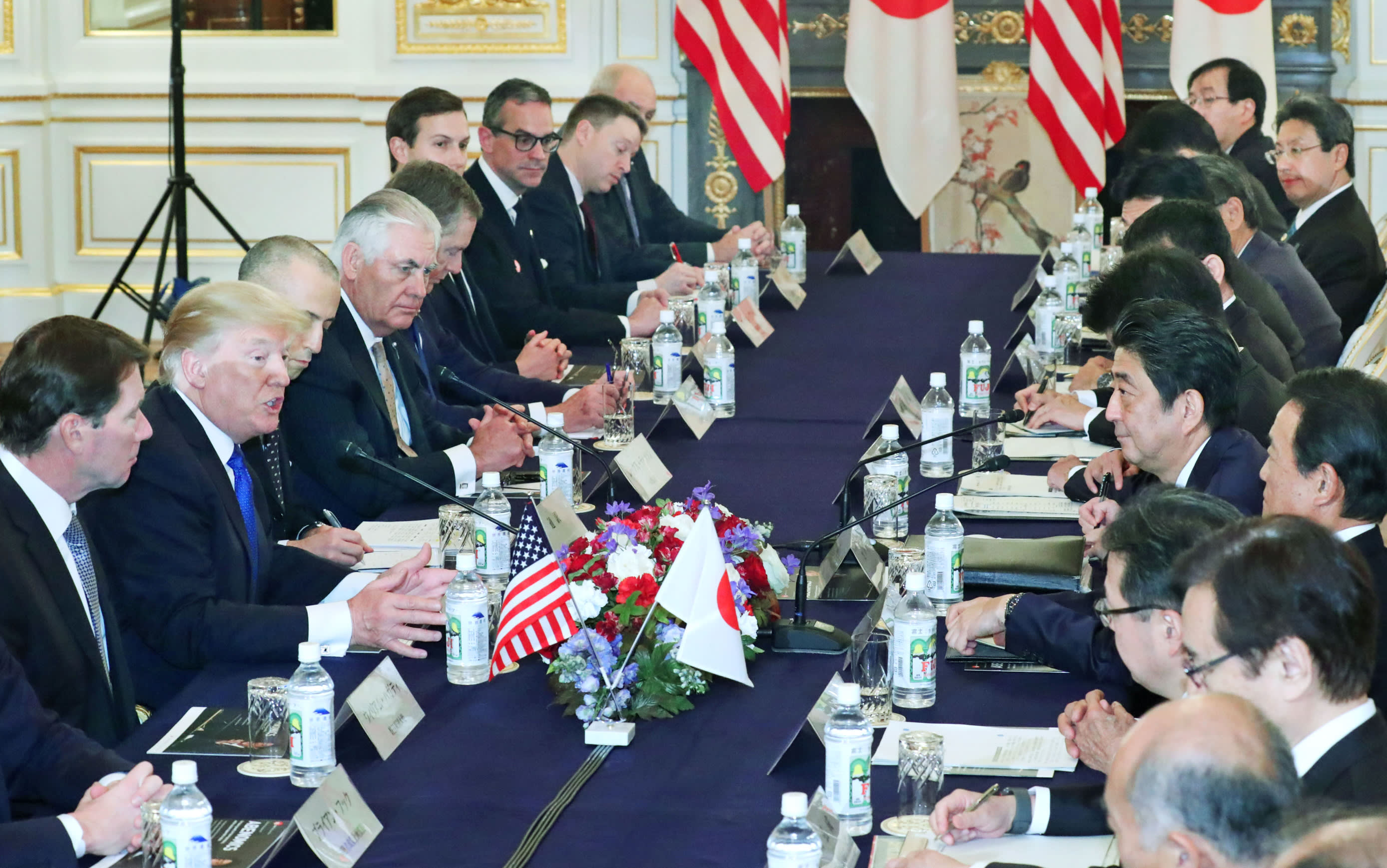 The U.S. and Japanese delegations met during Monday's summit at the State Guest House in Tokyo.
Politics

TOKYO -- Monday's summit highlighted Washington's carrot-and-stick approach toward Tokyo on trade issues, as President Donald Trump pushed again for Japan to reduce its surplus with the U.S. even as the two sides struck deals on energy and infrastructure cooperation.

During his meeting with Prime Minister Shinzo Abe, Trump touted the more than $400 billion that Japanese companies have invested in the U.S. and the 850,000 people they employ there, according to the White House. The president specifically noted automotive components maker Denso's announcement last month of plans to invest $1 billion in operations in the state of Tennessee.

Yet Trump again complained about "our chronic trade imbalances and deficits with Japan." Abe, looking to steer clear of trade issues at the summit, said he hoped to see specific measures to that end discussed within the U.S.-Japan economic dialogue.

Japan is the second-largest contributor to the U.S. trade deficit, behind only China. Automobiles accounted for nearly 80% of last year's $68.8 billion imbalance, with about 30% of Japan's auto exports going to the U.S. The topic remains a sore spot for Washington. Abe agreed during the Monday summit to relax some obstacles to U.S. imports in an effort to ease this stress. American autos will be included in a tax break on fuel-efficient vehicles, likely benefiting companies such as electric-car maker Tesla. Japan also will accept vehicles that meet U.S. safety standards even when they differ from its own.

These steps, which were part of the Trans-Pacific Partnership regional trade pact from which the U.S. withdrew after Trump took office, suggest that Tokyo was intent on ensuring the president had something to show for his trip.

Discussion likely continued regarding a Japanese safeguard tariff on frozen U.S. beef that was activated in August. Washington has pressed Tokyo to remove the duty immediately, but working-level talks ahead of the summit failed to yield an agreement.

Trump made no direct mention of a previously proposed bilateral free trade agreement. Trade talks between the two countries are widely expected to begin in earnest next fall, after the U.S. midterm congressional election. Renegotiation of the North American Free Trade Agreement with Canada and Mexico is seen taking until March at the earliest, and U.S. plans to rework or even scrap a free trade deal with South Korea are unlikely to go over well with Seoul.

The differing approaches to trade between Washington and Tokyo may complicate negotiations when they do begin. The Trump administration focuses on bilateral deals, while Japan prefers multilateral frameworks. The latter hopes to reach a broad agreement among the 11 remaining countries in the TPP at a summit this week.

Prospects look brighter for cooperation in areas such as energy. The U.S. and Japan established a strategic energy partnership, agreeing to work together on boosting American exports of liquefied natural gas to Asia. The two nations also have agreed to coordinate efforts to secure contracts for infrastructure projects.

Thomas Hardy, acting director of the U.S. Trade and Development Agency, signed a memorandum of cooperation Monday with Satoshi Kusakabe, commissioner of Japan's Agency for Natural Resources and Energy. The partnership benefits both Japan and the U.S., Hardy said, and allows for fair and transparent development.

Washington and Tokyo also plan to renew a nuclear cooperation agreement set to expire in July 2018, maintaining the status quo without renegotiating the pact.

The two countries will expand cooperation on infrastructure exports outside the energy sector as well. Nippon Export and Investment Insurance and the Japan Bank for International Cooperation will sign a memorandum of understanding Tuesday with the Overseas Private Investment Corp., a U.S. government agency. These agencies will provide funding and insurance to support private-sector infrastructure construction.

By furthering cooperation in less contentious areas such as energy and infrastructure, Japan likely hopes to ease pressure from Washington elsewhere.