Japan pours on loans to India for infrastructure projects TOKYO -- Japan will lend India up to 149.2 billion yen ($1.4 billion) for projects such as a subway in Mumbai, further boosting its aid for economic development in the South Asian country.

Foreign Minister Taro Kono and his Indian counterpart, Sushma Swaraj, reached the funding agreement Thursday during talks here. Japan will do all it can to promote India's development, Kono said at a joint news conference after the meeting, calling the country Tokyo's most important partner in the Indo-Pacific region.

Japan now has extended more than 384.1 billion yen to India in fiscal 2017, the most yen financing to a single country in one year.

The largest amount in the new loan package, up to 100 billion yen, is allocated toward work on a Mumbai subway line. The project aims to ease the severe traffic congestion and pollution that plague the nation's largest city and improve quality of life and economic growth.

A 30 billion yen credit line goes toward developing a seawater desalination plant and related distribution facilities in Chennai. The project will help provide safe drinking water and sewage systems for residents of that major metropolitan area. Another roughly 8 billion yen is available to build intelligent road transport systems in that eastern city. 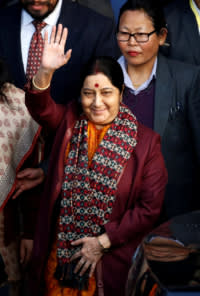 Japan also will provide a little over 11 billion yen for planting trees and managing forests in northern India.

During a dinner meeting, the foreign ministers confirmed their countries would cooperate on efforts to bring about North Korea's denuclearization. Kono also outlined Japan's efforts to improve ties with China. Relations between India and China are tense, as a portion of their border remains contested.