More specifically, Tokyo's recent launch of its new "Free and Open Indo-Pacific Strategy" and China's promotion of its Lancang-Mekong Cooperation initiative have fuelled fears among the five countries of mainland Southeast Asia -- Cambodia, Laos, Myanmar, Thailand and Vietnam -- that they will be forced to choose between competing powers for aid, trade and other forms of support.

Voicing their concerns at a March 24 forum on Mekong-Japan cooperation in Phnom Penh, regional experts called for a new coordination mechanism -- possibly within the Association of Southeast Asian Nations or a new, outside body -- to represent the five countries with authority to negotiate with donors and oversee all aid and development initiatives.

Sonoura rejected suggestions that the strategy was aimed at containing an expansionist China and described the initiative as a way to combine two continents and oceans through transport and infrastructure linkages as well as "soft" connectivity such as promotion of free trade, rule of law and enhanced security.

"Some think [Japan's] strategy is aimed at containing some countries, but that sort of perception is completely wrong, we think it is possible to cooperate with any country that upholds the principles of that strategy. Also mistaken is the opinion that this strategy threatens ASEAN's unity and centrality. Let me ask this question: How can we realize this strategy without the cooperation of ASEAN that connects the Indian and the Pacific oceans?" Sonoura told the forum.

Tokyo's push to promote its Indo-Pacific strategy comes just ahead of the March 30-31 summit of Greater Mekong Subregion countries in Hanoi, and after the second China-led Lancang-Mekong summit of the five regional countries and China took place in Phnom Penh in January. The GMS summit, held every three years and sponsored by the Asian Development Bank, brings together the six GMS countries and development partners.

Japan, which does not include China in its own Mekong-Japan summit process, has not put a figure on an overall budget for projects under the new Indo-Pacific strategy, but the initiative encompasses actual and planned corridor development schemes in the East and South Asian regions as well as Africa for infrastructure, including transport links, economic zones, and "soft' initiatives such as promoting the rule of law and free trade. With its aim to improve "connectivity" between Asia and Africa, with ASEAN as the "hinge," it is likely that Japan's ASEAN development plans will be increasingly folded into its broader strategy.

Similarly, there is no mention of China and its sweeping Belt and Road Initiative in Japan's "free and open" Indo-Pacific rhetoric. In the Mekong region, both powers are conspicuously excluding each other from their regional development strategies and affiliated organizations.

While welcoming promises of more aid and investment, experts at the Phnom Penh forum warned that overlapping interests between donors and investors were creating dilemmas for smaller countries.

"There is only really China and Japan for this region, and China is stealing Japan's thunder," Thitinan Pongsudhirak, director of the Institute of Southeast Asian Studies at Chulalongkorn University in Thailand, told the forum. Noting how the China-led Lancang-Mekong forum has supplanted older mechanisms funded by Japan and Western organizations, he called for a rules-based organization and a code of conduct for the Mekong River, which flows from China through the five regional countries.

Other experts told the forum that ASEAN should be empowered to act as a coordinator for rival schemes and donors in the region. "The Japan-led 'Free and Open Indo-Pacific' will undoubtedly fuel greater anxiety among smaller states in Southeast Asia as it will directly challenge the rise of China," said Pou Sothirak, a former Cambodian vice foreign minister and head of the Cambodian Institute for Cooperation and Peace, which convened the forum.

"The concerns raised are valid because both Japan and China are exerting strong influence in this region; competition will increase as both push harder for their strategic initiatives -- BRI and Lancang-Mekong Cooperation in China's case and the 'Free and Open Indo-Pacific' strategy for Japan.

But it should not be a question of "either/or China or Japan," he noted. "This region needs them both -- and more, especially donors whose actions aim to ensure proper management of the Mekong River's resources against unsustainable development. A new coordination and monitoring mechanism among donors is essential to ensure harmony among all stakeholders and to optimize the best outcomes for development needs of the GMS countries."

Rather than a Mekong River code of conduct, a better starting point could be a Mekong water governance body as a new, ASEAN-led coordination authority, Pou added. "I believe that China would accept ASEAN as the key coordinator. The first challenge is for the Mekong region to convince all of ASEAN to agree that Mekong River issues should be a regional priority. Second is to convince China, Japan, and others that such a coordinator is needed to enhance greater understanding and effectiveness." 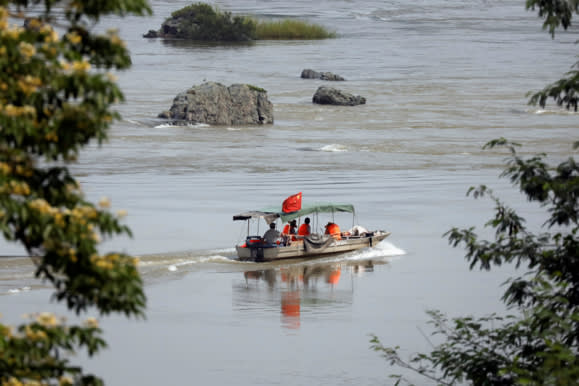 A Chinese boat with a team of geologists surveys the Mekong River, at the border between Laos and Thailand.   © Reuters

China claims core membership of the Mekong region through its southern areas along the river and has put the region at the heart of its BRI plans. At the LMC summit in January it launched a five-year Mekong region "action plan" for cooperation in areas from infrastructure to agriculture and announced more than $1 billion in concessional loans for the five downstream Mekong countries, on top earlier pledges of $1.54 billion in concessional loans and $5 billion for "capacity cooperation" in infrastructure and industry projects.

Japan meanwhile has been focusing on massive infrastructure and economic development along the East-West and Southern economic corridors that run west from Vietnam's coast to the Indian Ocean. Now in the final year of its 750 billion yen ($7 billion), three-year "New Tokyo Strategy" for Mekong region development, it is considering the next phase which is likely to see mainland Southeast Asian initiatives linked to its broader Indo-Pacific strategy.

Bradley Murg, a visiting research fellow at CICP and assistant professor of political science and Asian studies at Seattle Pacific University, said the vast flow of funds from China in recent years has "fundamentally altered the dynamics of aid and development in the Mekong region" and that Japan's Indo-Pacific strategy had added a new dimension.

"It's early days yet but Tokyo's new Indo-Pacific strategy inherently relies on American power-projection capability and the continued role of the U.S. Navy in maintaining freedom of navigation in the region," Murg said. "Tokyo's push indeed reinforces a new coalition seeking to balance against China's 'string of pearls' strategy -- and it is one with much to offer the region. Whether it is too little too late remains to be seen."