Japan's aid spending pales to what China is doing 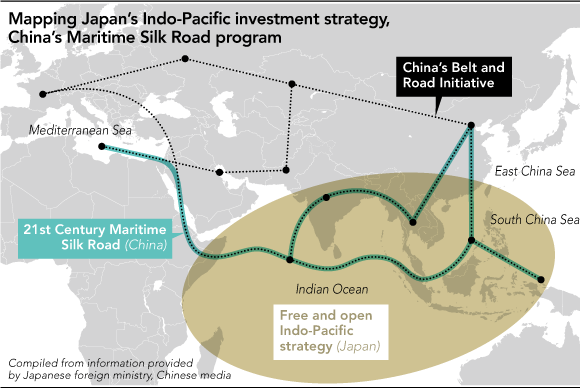 TOKYO -- Japan is under growing pressure to recalibrate its foreign aid policy to counter the rapid expansion of Chinese influence from Asia to Africa.

The foreign ministry has decided to request a more than 10% budgetary increase for so-called official development assistance for fiscal 2018. Japan's initial ODA budget for fiscal 2017, which runs through March 2018, was 434.3 billion yen ($3.94 billion).

Most of the increase would go toward financing infrastructure projects related to Prime Minister Shinzo Abe's "free and open Indo-Pacific strategy."

The priority areas for Japan's development aid policy are almost identical to those for China's "21st Century Maritime Silk Road" initiative, one of two pillars of President Xi Jinping's Belt and Road Initiative.

In recent years, Japan has used its ODA to finance patrol boats for Southeast Asian nations and infrastructure projects in countries along Africa's coastal regions.

Tokyo has also been providing financial aid for radar installations on remote islands, port facilities and other projects in Asia.

Many of these expenditures are meant to counter China's drive to expand its influence in much the same sphere. At the same time, they are also effectively supporting Xi's grand Belt and Road vision.

China spent some $14.4 billion on development aid in the three years beginning with 2010.

"We can no longer reject cooperation with China, which has tremendous financial and technological power," a senior official at Japan's foreign ministry said.

But China clearly has ulterior motives. Its so-called "pearl necklace" -- a network of ports along the Indian Ocean -- is meant to surround India. "Pearls" have already been built in Sri Lanka and the tiny northeast African nation of Djibouti.

Tokyo is leery of Beijing's development aid programs, which on the surface often do not make economic sense and lack transparency. Under the surface, there is a payoff. China lends huge amounts of money to countries that are incapable of paying off the loans. When the recipients default, China wins.

This has happened in Djibouti, where China has converted a port ostensibly built for civilian use into a military base.

Japan wants to create a counterweight to China's growing military presence in the region. But its prospects are bleak. A high-ranking Indian government official recently told a senior official at Japan's foreign ministry that it might be possible to stop China in its apparent quest to own a land route to the West. On the other hand, China's maritime expansion, the Indian government official said, appears inevitable.

India, like Japan, is increasingly feeling outflanked by China. The South Asian nation has a long history of military and economic conflict with China. These days, it is finding it difficult to counter China's "pearl necklace" projects by cooperating with countries in the region.

As for Japan, new Foreign Minister Taro Kono is another uncertain variable in ODA strategy.

Kono once bitterly criticized the foreign ministry's aid policy and called for halving the ODA budget.

Since he took office, however, Kono has tried to reassure ministry officials by saying he has only demanded convincing explanations for its development aid projects. He has already authorized the ministry's budget requests, in line with its recent expenditures, for the next fiscal year.

Japan and China are the two principal sources of bilateral development aid.

While China is spending aggressively to boost its clout in strategically important areas, Japan is facing domestic pressure to improve the efficiency and effectiveness of its development aid.

Tokyo clearly needs to reinvent its ODA strategy to ensure that it can wield its limited financial resources to respond to China's growing influence.