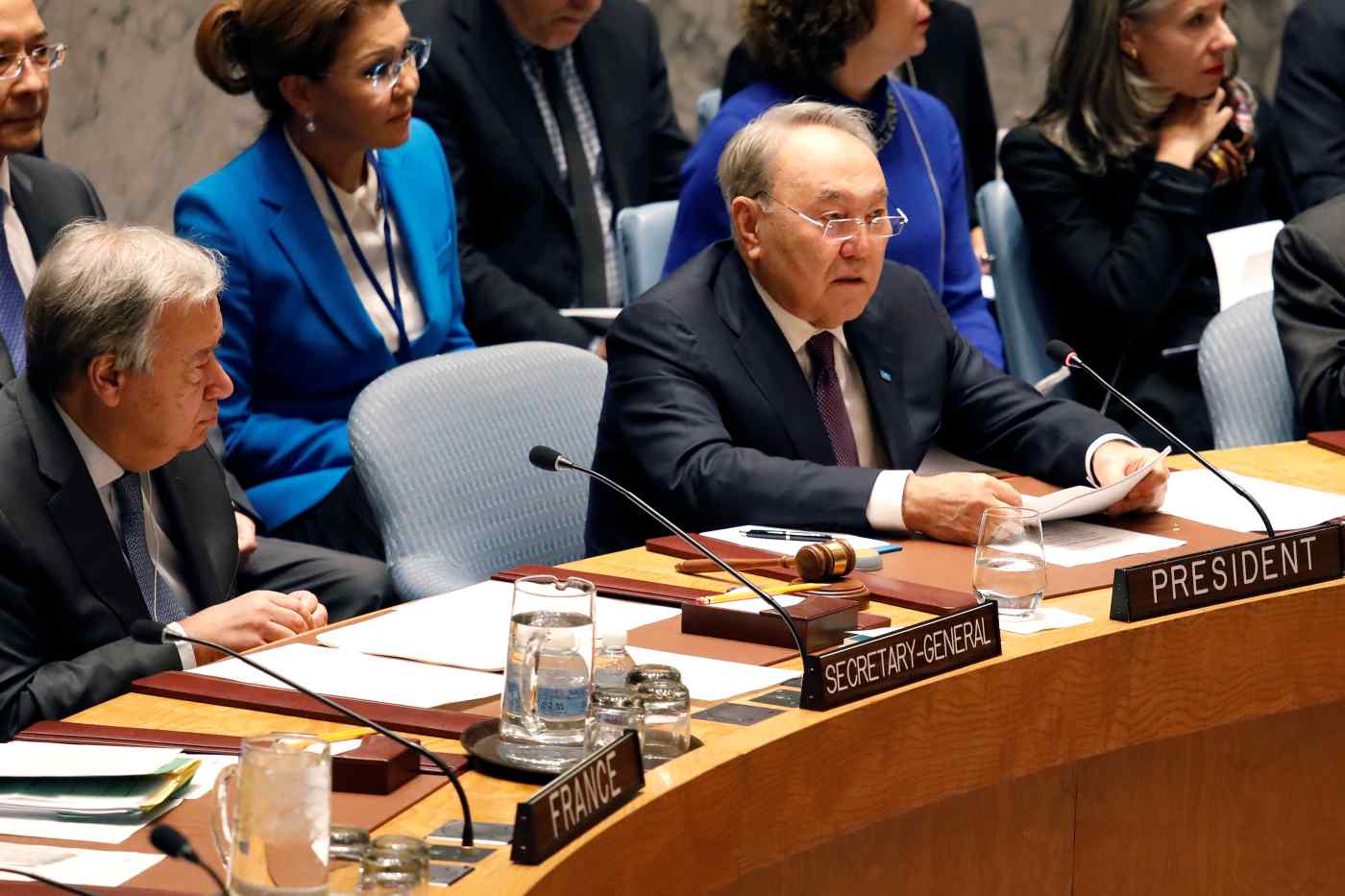 UNITED NATIONS -- Kazakhstan's decision to become a nuclear-free state after gaining independence from the Soviet Union should serve as a guiding example for other countries, President Nursultan Nazarbayev said Thursday, urging North Korea to do the same.

"We call upon all other states to follow our example," he said. "We called upon Iran to do so; now we call upon North Korea to do so."

"The example of North Korea may prompt a similar action from other countries with ambitions to possess nuclear weapons," warned Nazarbayev, who said that "I find it necessary to make withdrawal from the NPT [Nuclear Nonproliferation Treaty] more difficult." The Security Council could consider a new resolution setting forth "clear implications" for countries breaching the treaty, including through sanctions and other coercive measures.

Chairing the meeting, the flagship event of Kazakhstan's presidency of the council for the month of January, Nazarbayev touted his country's experience as a former nuclear weapons state that gave up its arsenal and called on others with such arms to follow its example.

Nikki Haley, the American ambassador to the U.N., praised Kazakhstan's self-imposed denuclearization as "one of the most important moments in the history of nonproliferation" and suggested that it was "a vote of confidence in the Nuclear Nonproliferation Treaty, which remains the cornerstone of the global nuclear nonproliferation effort."

The NPT, in effect since 1970, recognizes the U.S., the U.K., France, Russia and China as the only legitimate nuclear weapons states and bars other countries from acquiring or developing such arms. Despite the treaty's broad support, nuclear powers India, Pakistan and Israel, as well as recently established South Sudan, remain outside it. North Korea was a party until 2003, when it officially announced its withdrawal.

"The world is deeply concerned," about the nuclear issue on the Korean Peninsula, said the Kazakh president, who argued that it "can be resolved through the restoration of trust between the U.S., Russia, and the People's Republic of China."

Nazarbayev, in New York after a meeting earlier this week with President Donald Trump in Washington, said he discussed this need for trust between big powers in tackling the North Korean nuclear issue with his counterpart, noting that "I believe that the positions here converged."

The matter will be difficult to resolve without joint American, Russian and Chinese participation, Nazarbayev said. "In this regard, we call upon the stakeholders as expeditiously and constructively as possible to achieve a settlement to the North Korean issue."

China, which fears an outbreak of war on its doorstep, has consistently pressed for dialogue between the parties and pushed its own "suspension for suspension" proposal -- calling for the suspension of North Korean nuclear testing in exchange for a freeze on joint military drills by the U.S. and South Korea.

"All countries should stick to the general direction of peaceful solutions and push for appropriately resolving nonproliferation hot-spot issues by political and diplomatic means," said Wu Haitao, the Chinese deputy ambassador to the U.N., at the meeting.

"Confrontation and unrelenting sanctions and pressure will only lead to escalation of conflicts, thus increasing the risk of proliferation," he said.

The U.S., however, continues to push for such a pressure approach. "We call on all member states to fulfill their obligations and fully implement all U.N. Security Council resolutions on North Korea," Haley told the council.

"We will continue to work with our partners on the Security Council in pursuit of a peaceful, diplomatic solution to this crisis," she said. "But let me say it one more time: The United States remains fully committed to defending itself and its allies if necessary."