YANGON -- Myanmar and China agreed Friday to build an economic corridor between the two countries, furthering Naypyitaw's efforts to strengthen ties with Beijing as criticism over the Rohingya refugee crisis pushes it away from the West.

Myanmar, eager to spur growth during this period of democratization, is working on a delayed second round of economic reforms toward this end. Infrastructure construction -- a specialty of China's -- will be crucial to success. De facto civilian leader Suu Kyi, who has been accused of focusing too much on political and security issues, recently began stressing the importance of such infrastructure as electricity and transportation networks to achieving peace and stability.

On Thursday, Pope Francis wrapped up his first visit to Myanmar and traveled west to Bangladesh to meet with refugees from the Rohingya ethnic minority forced across the border by a military crackdown. Suu Kyi, meanwhile, headed north to China. She has visited three times in the year and a half since assuming the post of state counselor. 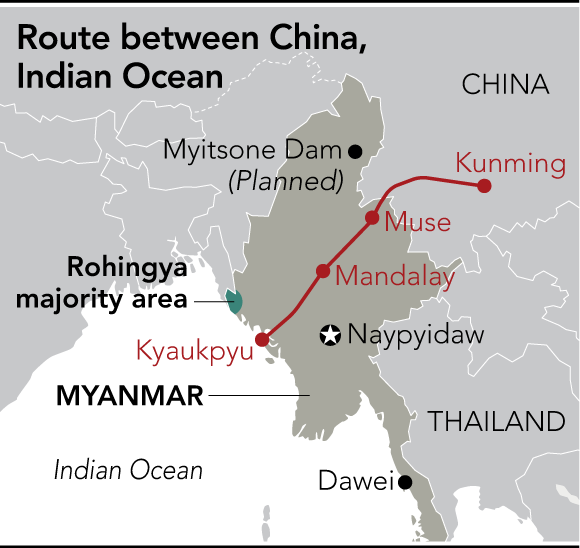 Suu Kyi was accompanied by officials including the energy and construction minister as well as the chief minister of Mandalay, a waypoint between the southern Chinese city of Kunming and the port of Kyaukpyu on the Indian Ocean. The delegation stopped in Kunming on the way to Beijing, dining with senior local Communist Party officials.

The meeting may have been related to the economic corridor. Myanmar, particularly Kyaukpyu, is key to China's Belt and Road Initiative to create a modern-day Silk Road stretching across Asia to Europe. Beijing plans to build a deep-sea port there -- a project enthusiastically welcomed by Naypyitaw -- as well as an industrial park. It also started up in April a crude oil pipeline linking Kyaukpyu and Kunming, providing an alternate route for oil shipments that does not pass through the Strait of Malacca.

Though no details have been provided about the proposed economic corridor, an expert on development projects speculated that it could involve building a road along the pipeline route, running from Kyaukpyu to Kunming via Mandalay and the border town of Muse.

Myanmar is cozying up to China politically as well, using it as a bulwark against mounting international criticism over the Rohingya crisis. Even as Europe and the U.S. condemn human rights abuses against the Rohingya by Myanmar security forces, Beijing has consistently supported Naypyitaw's stance that the matter is an internal affair. 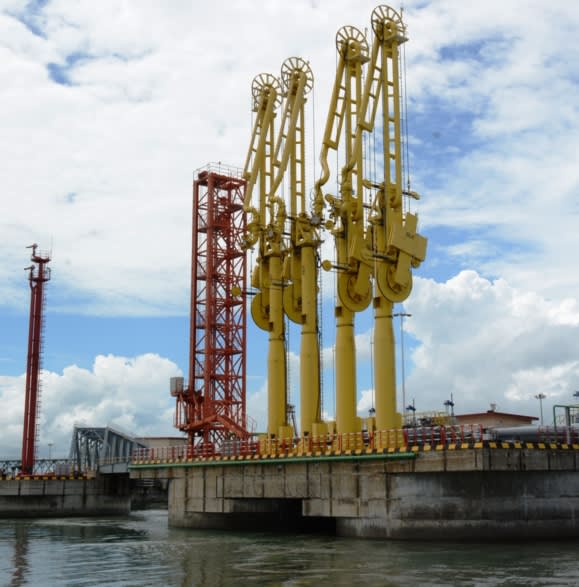 This terminal in Kyaukpyu moves crude oil from tankers to a pipeline that runs across Myanmar to Kunming in southern China. (Photo by Yuichi Nitta)

Speaking Tuesday as Pope Francis looked on, Suu Kyi stressed that the support of "good friends who only wish to see us succeed in our endeavors has been invaluable" in dealing with the Rohingya crisis, hinting that the government regards outside pressure as unwelcome meddling.

Naypyitaw's growing friendliness with Beijing worries some in Southeast Asia, who fear a divide within the Association of Southeast Asian Nations between pro-China countries and those keeping a distance from the regional superpower.

In an interview Thursday with the Nikkei Asian Review shortly before his death, former ASEAN Secretary-General Surin Pitsuwan lamented the lack of a firm, unified regional stance on such issues as the Rohingya crisis and territorial disputes with Beijing in the South China Sea.

The bloc risks "losing control of its own future," he warned.