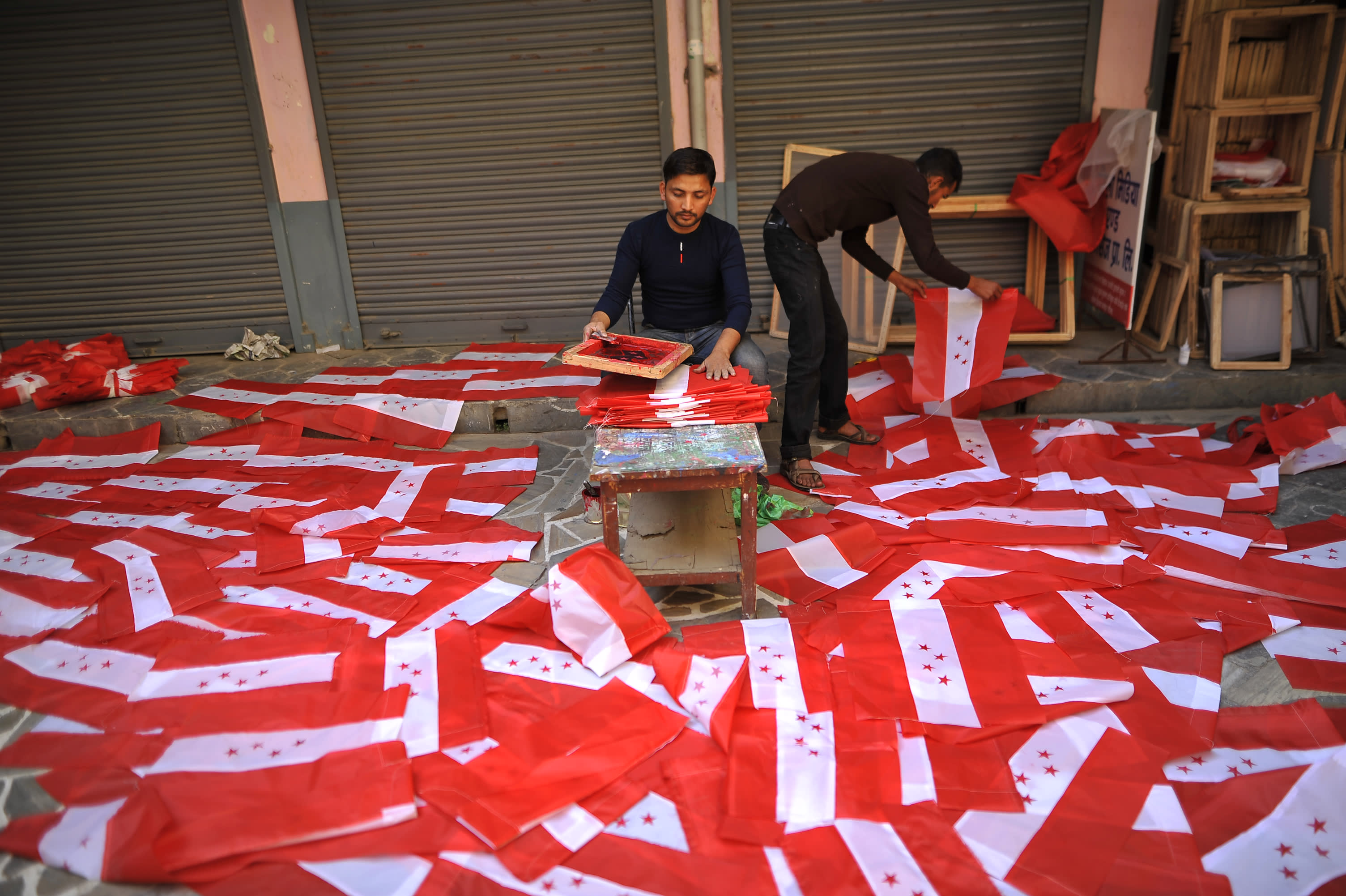 KATHMANDU -- As Nepalese begin voting in a general election on Nov. 26, not only will they be determining their government but also which superpower -- China or India -- will gain the upper hand over the small landlocked country.

The two communist parties that have formed an alliance are thought likely to win the elections that will take place in two phases, the second of which will be on Dec. 7. If so, India's plan to reinstate the current friendly government would fall on the wayside. Instead, China, which has been cold shouldered by the current administration, may soon find itself facing a friendlier partner.

Nepalese politics, once dominated by disparate entities, became polarized when the country's two largest communist parties forged an alliance last month, posing a serious challenge to the ruling pro-India party. In the recently held local elections, the communist alliance together received more than 50% of votes.

Nepal's largest trade partner, India accounts for more than 90% of the country's imports. The two share a 1,800km porous border that New Delhi is particularly concerned about. The border runs along the restive southern plains, which are used by militants to cross into India. Worried about national security, coupled with a desire to counter China's growing influence, New Delhi wants a government in Kathmandu that will protect its strategic interests.

On the other hand, China has dangled the prospect of energy and infrastructural aid. Caught so far in this struggle for power is Nepal's largest hydropower project. The government cancelled a contract earlier this month that was awarded by its predecessor to a Chinese company, dealing a blow to China's plans to develop infrastructure in the country. How the election pans out will have serious implications on regional politics.

The current administration gained power with the help of India. In September 2015, Nepal promulgated a constitution despite objections from India, which reacted by instigating a border blockade that deprived the country of basic necessities. New Delhi subsequently scripted the ouster of Prime Minister Khadga Prasad Sharma Oli, of the Communist Party of Nepal (Unified Marxist-Leninist), or UML. India then helped forge a coalition between the Nepali Congress and Communist Party of Nepal (Maoist Centre). That coalition fell apart when Maoist Centre ditched the Nepal Congress and unexpectedly formed an alliance with UML on Oct. 3 this year and pledged to merge the two after the polls. The two parties have jointly fielded candidates across the country.

The Nepali Congress was thus forced to seek a similar coalition with the pro-Hindu Rastriya Prajatantra Party and Madhesi Janadhikar Forum (Loktantrik). The alliance has backed candidates of its members in a few constituencies in the upcoming polls.

But whether they can upstage the communist parties remains to be seen. Addressing several election rallies together, UML's Oli and Pushpa Kamal Dahal, chairman of Maoist Centre, claimed their alliance will win a two-third majority, assuring Nepalese finally of political stability.

Some political commentators said that the alliances were forged cynically to consolidate votes and not because of any natural compatibility. "The alliances have not been based on any shared values or political agenda," said Bishnu Sapkota, a political columnist of Kantipur, Nepal's best-selling newspaper. "If so, there would have been some effort and homework in the weeks leading up to formation of the alliances. There was none."

If the communists win as predicted, one of China's key priorities would be to reinstate the 1,200 megawatt hydro plant the previous government had awarded to a Chinese state-owned company. Days before it stood down in June, the Maoist-led government signed a deal with China Gezhouba Group to build the $2.5 billion Budhi Gandaki Hydropower Project to supply electricity to Kathmandu.

The current government said it scrapped the contract because it wasn't awarded competitively. Yet, the move was widely seen as a politically motivated slapback of China while favoring India, which also has invested in two major hydropower projects in the country -- a 900MW facility in Upper Karnali and a 900MW Arun III in the country's west and east.

The alliances have not been based on any shared values or political agenda. If so, there would have been some effort and homework in the weeks leading up to formation of the alliances. There was none.

The communist alliance has prioritized rail and road networks with China and has already vowed to revive the Budhi Gandaki Hydropower Project if they gain power. Taking a harder stance against India, Oli, who struck a trade and transit treaty with China in March last year, has raised issues of sovereignty and self-sufficiency during rallies, in digs aimed at New Delhi.

But political commentator Sapkota said the communist alliance would soften its stance toward India. "The waves of nationalism will fade after the election," he said. "The UML will try to normalize its relations with India, and not appear as leaning too heavily towards China as it currently does."

Sapkota said that the first-ever provincial elections that are taking place at the same time as the general elections will also be important for China and India, to which some provinces share a border.

"What kind of leaderships are elected in provinces, both in the south and north, will have the potential to create a new dynamic around those provinces, and then with the central government," Sapkota said.  "From a national security point of view, having provincial governments will be a new experience for Nepal, and our two big neighbors' security concerns may actually deepen depending on the stability of some provincial governments."