Rocket landed within Japan's exclusive economic zone; may have been more than one

SEOUL -- North Korea fired at least one short-range ballistic missile on Monday morning from its east coast. It landed in the sea within Japan's exclusive economic zone, according to the Japanese government.

China's top diplomat in Tokyo for talks on North Korea

Abe pushing for more US deterrence in Asia

WannaCry shows how North's hackers can punch above their weight

US, Japan agree to turn up heat on North Korea

Japan, US tiptoe up to China's road as political winds shift

The missile, which flew about 400km, is assumed to be a Scud-class ballistic missile, according to the South Korean military. Pyongyang has a large stockpile of short-range Scud missiles developed by the Soviet Union during the Cold War.

South Korean military is confirming the details, with the possibility that multiple Scud-class missiles were fired. North Korea's latest missile is the fourth to fall into Japan's exclusive economic zone, with the most recent one landing on March 6. 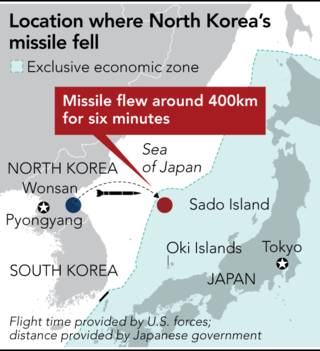 South Korea's Yonhap News reported that the latest missile fired was a Scud-C with a range of 500km.

Scud-C missiles already have South Korea within range, and Pyongyang is seen as testing South Korea's new liberal President Moon Jae-in, who has called for a more conciliatory approach to North Korea by resuming humanitarian assistance.

The latest missile launch is also seen as a countermeasure against the increasing pressure from the U.S., which has deployed two aircraft carriers in the vicinity of the Korean Peninsula.

North Korea already deploys Scud-class missiles for combat use. If the latest ballistic missile in fact turns out to be the same class, the launch is seen more as a military exercise or military provocation unlike the test launches of new missiles Pyongyang aims to deploy for combat use. Following the launch, Moon convened a National Security Council meeting at 7:30 a.m. The South Korean army strongly condemned Pyongyang, saying its continuous provocations "will be facing strong punishment from our military, the South Korea-U.S. alliance, and the international community."

The launch came only days after the Group of Seven leaders issued a statement at the end of a summit in Italy, saying that the nuclear-armed North Korea "increasingly poses new levels of threat of a grave nature" to international peace and security.

The latest missile launch was the ninth carried out by North Korea this year.