North Koreans have been heading home via China's Dandong Station, near the border.
Politics

North Koreans in China feel the sting of sanctions

DANDONG/BEIJING -- Flows of people and money between China and North Korea are slowing, as Beijing attempts to tame its rogue neighbor with banking controls and other restrictions.

Nowhere is the shift more apparent than in Dandong, a border city in China's Liaoning Province that sees 70% of bilateral trade. Since the North conducted a nuclear test for the sixth time on Sept. 3, it has become increasingly common to find North Korean laborers milling about at Dandong Station. Apparently, the Chinese government's refusal to renew their working visas has left them no choice but to return home.

"North Koreans work very hard and can be readily managed," said an executive at a local company. "Chinese workers hired in their place command higher wages but don't work as hard."

In a shopping mall located in the city center, the manager of an electronics shop said the number of North Korean customers has decreased sharply. A North Korean business owner who used to come in a couple of times a month has been conspicuously absent in the past two months, the manager complained. 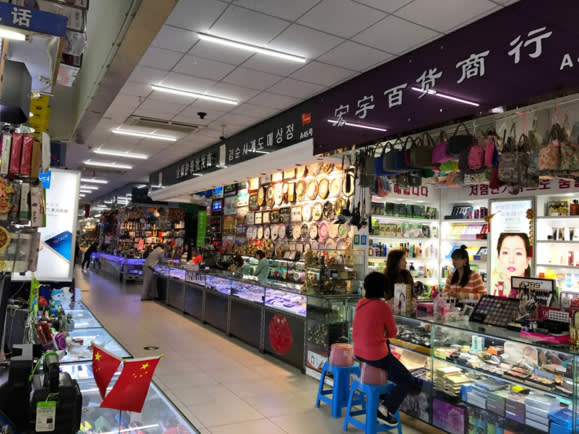 In normal times, this shopping mall in Dandong would be crowded with North Koreans.

North Koreans are feeling the pinch from banking restrictions, in particular. For young women who sing and dance at local restaurants, the new rules have made life considerably harder. "I came here from Pyongyang a year and a half ago, and it's a real problem that I can only shop with cash," one told me privately.

It quickly becomes clear that North Koreans are desperate for yuan. A North Korean restaurant I visited accepted only cash payments, turning down my requests to pay with a smartphone or credit card. The restaurant also refused to issue a receipt.

Word on the street

I came here from Pyongyang a year and a half ago, and it's a real problem that I can only shop with cash

Over in the heart of Beijing, there are numerous shops for North Koreans near the country's embassy. At one of them, I asked the owner to introduce me to an underground money changer, who rolled up on a motorcycle a few minutes later with a bagful of cash.

"North Korean merchants change U.S. dollars into yuan in China to do business, then convert the currency back into dollars when they return home," the money changer explained. "The number of customers has greatly decreased because of the sanctions," he added.

At a nearby bank, I asked a teller if banking services are banned for North Koreans. She said North Koreans have been unable to open accounts since the end of last year. If they need to withdraw a large sum, they are required to apply and wait for a screening process that can last up to a month. Depositors are still allowed to withdraw up to 20,000 yuan ($3,030) per day through ATMs, she said, adding that North Koreans may well take all of their money out in case there is a blanket ban on withdrawals.

China's banking restrictions are essentially anti-money laundering measures, according to a diplomat familiar with economic ties between China and North Korea. The government slapped a ban on opening bank accounts, then restricted large withdrawals and deposits so that the People's Bank of China -- the central bank -- could check how much North Koreans were holding in the country, the diplomat said.

Then, this summer, the Chinese authorities put in a request with the North Korean Embassy, asking North Koreans to withdraw their deposits by the end of August. The thinking was that this would make it easier to follow large transfers and pinpoint money laundering related to Pyongyang's missile development program.

Wang Jingdong, senior executive vice president of Industrial and Commercial Bank of China (ICBC), said in September that the major state-run bank would fully honor United Nations sanctions against North Korea and operate in strict compliance with laws and regulations. The latter part of his remark suggests ICBC is restricting transactions involving North Koreans, even though the U.N. sanctions do not include a ban on banking services.

China is imposing its own financial sanctions. Sanctions won't force North Korea to give up nukes: US expert

This is a major departure from Beijing's hitherto cautious stance on North Korea, which relies on China for 90% of its external trade. One might read into it this way: President Xi Jinping's administration feared the U.S. would impose sanctions on major Chinese banks just ahead of the Communist Party's pivotal congress later in October.

The administration had reason to be wary. In September 2016, the U.S. Department of Justice moved to seize 25 bank accounts controlled by Chinese company Dandong Hongxiang Industrial Development and its affiliates over their alleged involvement in money laundering for North Korea's missile program. In July, the U.S. removed the Bank of Dandong from the dollar settlement system on the grounds that the regional bank in Liaoning hosted four of the 25 accounts.

Some of the accounts in question were at big state institutions, including ICBC and China Construction Bank (CCB). So ICBC's controls on North Korean transactions may be aimed at pre-empting another move by the U.S., a Western diplomatic source said.

China's banking restrictions are not exactly airtight. Until recently, anyone was able to open an account in China by showing identification and providing a cellphone number. A considerable number of Chinese have multiple accounts. This gives North Koreans at least a little maneuvering room.

"I still have workable accounts and some North Koreans are using dormant accounts held by Chinese," said one North Korean merchant in China.

Stemming the flow of funds into North Korea's weapons programs is a game of whack-a-mole.

Masahiko Nagakawa, a senior overseas research fellow at the Japan External Trade Organization's Institute of Developing Economies who is based in Seoul, said, "Although restrictions on banking can have significant effects on trade in the short run, North Korea may develop separate trading routes in time."