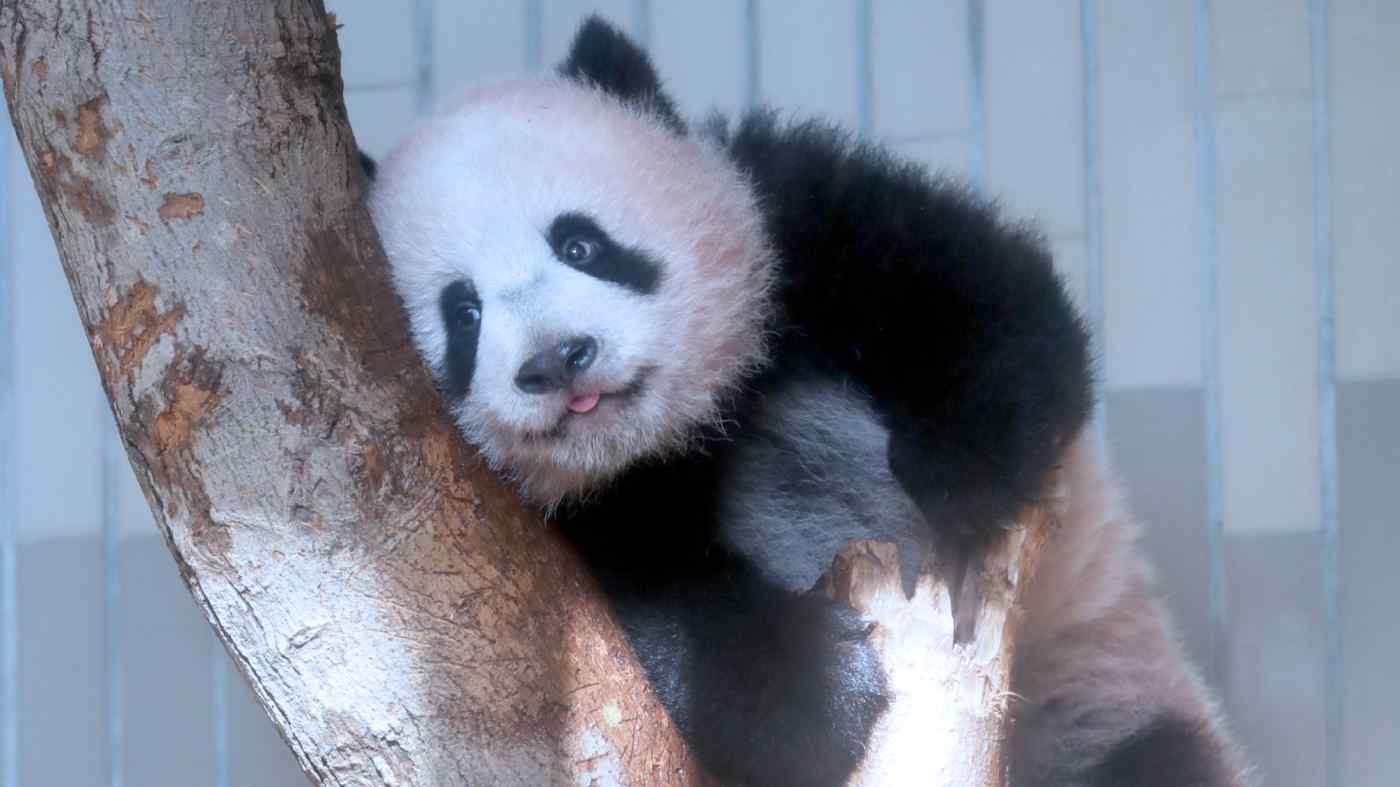 Xiang Xiang plays in a tree as she is introduced to the media at Ueno Zoo in Tokyo on Dec. 18. (Photo by Maho Obata)
MITSURU OBE, Nikkei staff writerDecember 27, 2017 12:10 JST | China
CopyCopied

TOKYO -- Visitors to Tokyo's Ueno Zoo don't usually think about who owns the zoo's giant pandas, and who benefits from their massive popularity.

Like all pandas around the world, Ueno's panda couple is leased from China for a fee of about $1 million a year -- the most expensive zoo animal according to Guinness World Records. The fee is said to be used for the conservation of pandas in their native habitat in China's mountainous west. But the rest of the world has little idea about how that money is spent. China seems more concerned about increasing the population of captive pandas, thanks to their commercial and diplomatic value to China, rather than increasing the population of those in the wild.

Some say that Beijing is using the panda loan program to create an image of a gentle, peace-loving nation, despite widespread views that the country is on a mission to remake the U.S.-led world order. China "is deeply committed to projecting an image of a benevolent superpower," said Nancy Snow, a professor of public diplomacy at Kyoto University of Foreign Studies.

"All countries, no matter their government, use propaganda of varying degrees to present the best 'face' of that country in the world," she said.

When the baby panda Xiang Xiang was born at Ueno Zoo in June, Chinese foreign ministry spokesman Lu Kang said the giant panda is "the ambassador of friendship" between China and other countries. "We hope that it plays a positive role in strengthening the bonds between the Chinese and Japanese people."

The Japanese media was in a frenzy as it covered Xiang Xiang's public debut at the zoo on Dec. 19, the zoo's first such display in 29 years.

Pictures of the zoo's pandas made the front pages of newspapers, while TV channels broadcast live images of Xiang Xiang, with crowds expressing delight as the panda cub rolled over, or climbed a tree, or squirmed in her mother's arms. For children, this event may well be their introduction to China.

But public opinion of China remains low in Japan. About 90% of Japanese have had unfavorable views about China over the last five years, according to surveys conducted by Japan's Genron NPO.

A survey by the Pew Research Institute paints a similar picture, showing that in Japan, 83% hold an unfavorable view toward China. In the U.S. this is 47%, and in South Korea it is 61%.

Tensions over the East China Sea is partly to blame. But many experts point out that the bigger concern is Japan's focus on sensationalism and an apparent lack of deeper interest in its neighbor.

"There is little reporting [in Japan] about the circumstances surrounding pandas in China or why they are offered to other countries," said Shin Kawashima, professor of political science at Tokyo University. The lack of intellectual curiosity reflects the lack of serious discussion within the Japanese government about how it wants to shape its relationship with China, he added.

Abe is working to bring about a much delayed trilateral summit with Seoul and Beijing next year. This could be followed by Abe's visit to China and a reciprocal visit to Japan by President Xi Jinping.

The efforts are aimed at developing with China the same kind of relationship Japan has with other countries, but not much more, Kawashima said.

Under the loan arrangement with China, Xiang Xiang is owned by China, even though she was born in Japan.

There is also the issue of whether the birth of a captive panda is something to celebrate -- such pandas usually do not survive in the wild.

Still, many countries want pandas for their zoos. Many see it in their political and economic interest to be recognized as a friend by China. Ueno Zoo received its first pandas in 1972, a month after Tokyo and Beijing normalized diplomatic relations. But China did not give just any pandas. It carefully chose photogenic animals with the whitest fur possible and black spots around the eyes tilted just so for maximum cuteness.

When the giant panda was put on the endangered species list in 1984, China started leasing the animal under the name of international research. But now, as China grows stronger, the country is becoming more open about what it wants from other countries in exchange.

In 2013, China reportedly threatened to take away the pandas from Vienna's Schonbrunn Zoo -- the world's oldest zoo -- to register its displeasure at Austria's leader meeting with the Dalai Lama.

But China's panda loan program is only going to expand, as nations seek Beijing's good graces. This year, the Netherlands, Germany and Indonesia all received pandas, and Denmark and Finland are scheduled to get their own pandas soon.

"We citizens should have at least a curious orientation, if not an investigative outlook, on all policy-driven issues," Kyoto University's Snow said. "We should also seek to understand the motivations that drive countries to behave as they do, and recognize that countries are comprised of governments and the people."