TOKYO -- U.S. Defense Secretary James Mattis on Saturday said there is no immediate need for "military maneuvers" to counter Chinese assertiveness in the East and South China seas, but he strongly condemned Beijing's behavior in the region.

Mattis was speaking to reporters in Tokyo after talks with his Japanese counterpart, Tomomi Inada. The Pentagon chief said China has "shredded the trust of nations in the region," indirectly referencing Beijing's moves to extend its maritime reach, such as the construction of artificial islands in the South China Sea.

But he stressed that now is a time for diplomats to act, rather than the U.S. military. "What we have to do is exhaust all efforts -- diplomatic efforts -- to try and resolve this properly, maintaining open lines of communication," Mattis said. "There is no need at this point in time for military maneuvers or something like that, that would solve something that is best solved by the diplomats."

Mattis also said he sees the alliance between Japan and the U.S. as a "cornerstone of peace and stability" in the Asia-Pacific Region. "Let me assure you that President [Donald] Trump's administration places a high priority on this region and specifically on long-term allies like Japan," he said. 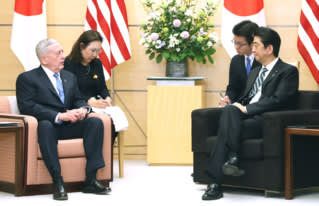 Mattis on Friday met with Japanese Prime Minister Shinzo Abe and Foreign Minister Fumio Kishida. In those meetings, the secretary reaffirmed Washington's commitment to serve as a deterrent against any attempt by China to seize the Japanese-administered Senkaku Islands -- which China claims and calls the Diaoyu  -- as well as aggression by North Korea. He also told Abe that the U.S. will continue to extend its nuclear umbrella over Japan.

The same commitments were emphasized in the meeting with the Japanese defense minister. "We agreed that North Korea's nuclear program and their development of ballistic missiles is a threat to security across the region, as well as for the U.S. and Japan," Inada said. "We also agreed that China's actions in the East and South China seas are a regional security concern." During the election campaign, Trump suggested that he might withdraw U.S. forces from Japan if Tokyo did not shoulder the entire cost burden. Inada said the issue did not come up in the meetings, while Mattis contradicted Trump by praising the arrangement with Japan.

"I believe that Japan has been a model of cost-sharing, of burden-sharing," Mattis said. "We have constant dialogue about this, we worked through the details, but we can point to our Japanese-American cost-sharing approach as an example for other nations to follow."

Mattis spent two days in South Korea prior to his visit to Japan. He said Pyongyang's nuclear threat will be treated as a top-priority security issue, and promised that a nuclear attack by the North on American allies would be met with an "effective and overwhelming" response.

This is the first overseas tour by a senior Trump administration official. With Secretary of State Rex Tillerson, a former Exxon Mobil CEO, short on foreign policy experience, Mattis is expected to take a leading role in Asian diplomacy.