SEOUL -- The Trump administration's plan to show a united front against North Korea in the Sea of Japan took a step back this week as South Korea rejected a U.S. proposal to conduct a trilateral military exercise that would have included participation from Japan.

In a rare move, the U.S. Navy has gathered three aircraft carriers for the exercise, which has been timed to coincide with President Donald Trump's tour of Asia.

But, according to Japanese and South Korean diplomatic sources, the proposal to include Japan's Self-Defense Forces was met with resistance from Seoul, possibly out of concern for relations with China.

Instead, the U.S. and South Korean navies began a four-day bilateral military exercise on Saturday.

Beijing looks to Seoul for ally on North Korea

Taking part in the exercise are three aircraft carriers -- the USS Ronald Reagan, USS Theodore Roosevelt and USS Nimitz -- 11 U.S. destroyers as well as seven South Korean vessels, two of which are also destroyers. The exercises are set to include air defense drills, maritime surveillance, replenishment at sea and other training exercises.

While the proposal was welcomed in Tokyo, the South Korean government refused to accept Japanese participation, citing public sentiment among other reasons. Seoul is seemingly ill at ease with the deployment of Japan's SDF in waters close to the Korean Peninsula. 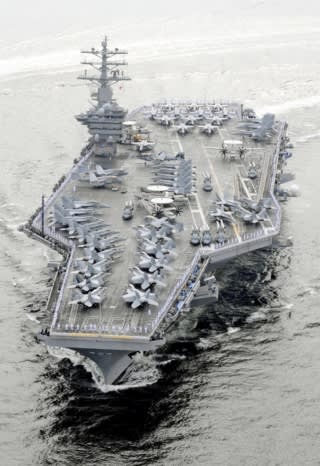 A spokesman for South Korea's Ministry of National Defense said on Thursday that no joint military drills involving all three countries had been planned.

Seoul also expressed reservations about Japan taking part in joint exercises conducted by the U.S., South Korea and Australia off the island of Jeju on Nov. 6 and 7. The drills were designed to simulate the interception of nuclear-related materials destined for North Korea.

Some experts have suggested South Korea's reluctance over Japan's participation is down to a desire to mend fences with China.

In late October, Seoul agreed with Beijing to try and improve a relationship that had deteriorated over the deployment of the U.S. Terminal High Altitude Area Defense system on South Korean territory.

The South Korean government has announced that military cooperation with Japan and the U.S. will not develop into an alliance.

Meanwhile, the deployment of three U.S. aircraft carriers near the Korean Peninsula has not gone unnoticed in Pyongyang. The state-run Korean Central News Agency on Saturday criticized the U.S. for increasing military tension in the Asia-Pacific region, warning that North Korea, as a responsible nuclear power protecting the gateway to Northeast Asia, would never stand by and watch as the U.S. attempted to bring about nuclear war.