BEIJING -- North Korea made numerous attempts to compel China to ease sanctions in connection with the recent visit by a Chinese envoy, several sources say, signaling cracks in the decades-long friendship between the two nations amid mounting international pressure against Pyongyang's nuclear and missile development.

China traditionally sends a special envoy to the country following the twice-in-a-decade Communist Party National Congress. But when Beijing first discussed this year's trip, Pyongyang demanded that economic sanctions be eased in exchange, pressing China for siding with U.S. demands that the North abandon its nuclear program.

Gasoline prices have doubled as of October in North Korea's capital after beginning to rise in the spring, said a source who frequents the country. Petroleum products are harder to find on the streets as the government increases its reserves. The new United Nations sanctions adopted in September could slash North Korean oil imports by another 30% if fully implemented, placing further pressure on the economy. State sponsor of terror designation not only pointed at North Korea

Tighter restrictions on gasoline have more civilians turning to the subway or even walking for transportation. Wood-gas cars are growing more common on Pyongyang's roads, the source also said.

Even sectors not targeted by the U.N. sanctions feel the heat. China in September began shutting joint ventures with North Korean parties, a move that quickly reduced outlets for products from the North. A Beijing shop owner recently asked a North Korean trader whether he had scored any new contracts. The trader simply shook his head.

But China's hands are tied, as President Xi Jinping on Nov. 9 reassured his American counterpart Donald Trump -- who says a military response remains on the table -- that sanctions against the North just need time to work. Beijing also advocates a "double freeze" approach, where North Korea halts its nuclear program in exchange for the U.S. suspending military drills in the area, to lay the groundwork for an eventual dialogue.

Yet Pyongyang kept pushing in hopes of a concession, and argued that this year's envoy ranked too low to meet with North Korean leader Kim Jong Un. Song Tao, head of the Chinese Communist Party's International Liaison Department, is a Central Committee member and occupies a lower rung in the party hierarchy than the past two special envoys, who served on the 25-member Politburo.The North repeatedly insisted that Song would be met by Ri Su Yong, vice chairman of the Workers' Party of Korea, rather than Kim as would have been customary. 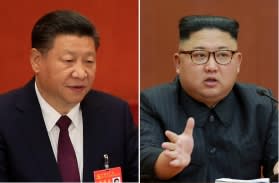 Immediately after North Korea's first nuclear test in 2006, China sent Tang Jiaxuan as a special envoy to the country. Tang, like Song, was part of the Central Committee, but the North still granted him a meeting with then-leader Kim Jong Il in hopes of scoring energy assistance in exchange for halting nuclear development.

But Beijing and Pyongyang today are unlikely to find a compromise that also would satisfy the U.S. Xi could lose face if a higher-ranked envoy failed to make any progress.

Song arrived in North Korea on Nov. 17 without any promise that he would meet with Kim Jong Un. According to Pyongyang, the envoy was greeted by Workers' Party Vice Chairman Choe Ryong Hae, who received a gift intended for Kim -- a message that Song would not see the North Korean leader in person.

China, snubbed by the gesture, did not officially comment on the gift. Song was confirmed to have met just Choe and Ri.

Despite the rising tensions, neither China nor North Korea is likely to desert the other. Considering any turmoil on the Korean Peninsula would spill over the border into China, Beijing continues to provide some oil to the rogue state to prevent the regime from collapsing.

The North also realizes that Chinese support is crucial to its survival. North Korea holds about 1 million tons of oil in reserve, a diplomatic source says. The country is believed to consume about 700,000 tons yearly, which suggests it could exhaust the supply in a year or two if China ceased shipments.

Imports from Russia could be an alternative. But "while China provides some of the oil for free, Russia charges for all of it," a Chinese researcher said, noting the limits to such an approach.

The U.S., seeing Song's trip to North Korea as a bust, has toughened unilateral sanctions against Pyongyang and redesignated the country as a state sponsor of terrorism.

Pyongyang has refrained from missile and nuclear tests in the past two months. It remains unclear whether increased pressure would result in dialogue or further provocations, but many are losing hope.

"There is a high chance that the U.S. will take military action in the next year," a Chinese diplomatic source said.