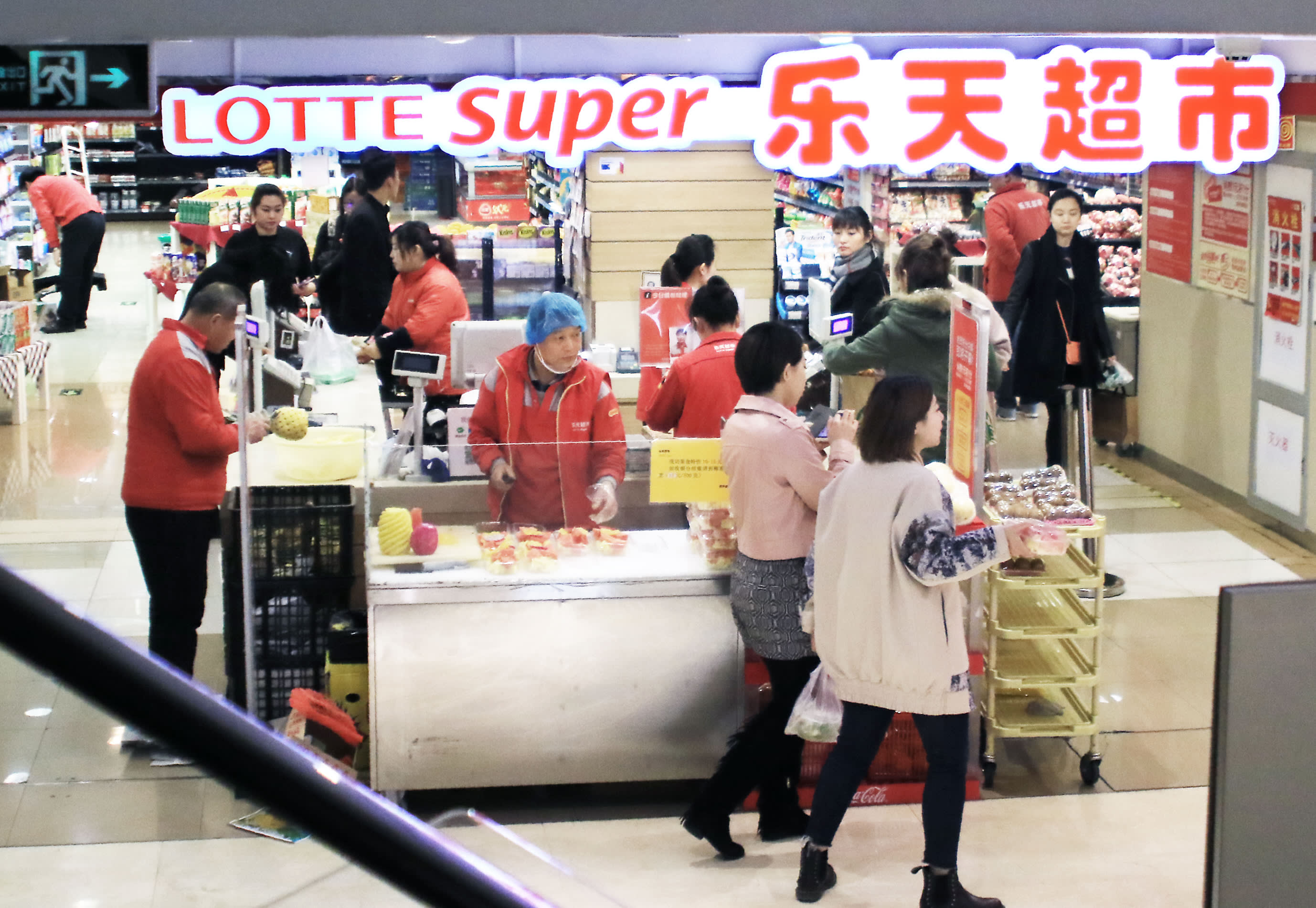 SEOUL -- Mounting political tension between South Korea and China is taking a toll on South Korean companies, with Beijing suspending local operations of Lotte Shopping discount stores and blocking group tours bound for the neighboring country, among other restrictions.

Lotte said the Chinese authorities have not allowed its 39 outlets there to do business since Saturday, a week after an affiliate of the company decided to let the South Korean defense ministry use a golf course it owns in the rural southeastern town of Seongju to host a missile defense system. So far, no stores have been vandalized, according to the company.

The U.S. military will use the 18-hole country club to deploy its Terminal High Altitude Area Defense (THAAD) anti-missile system, which arrived in the country on Monday. China opposes the plan, saying it threatens the nation's security. Washington, meanwhile, argues that it is a necessary safeguard against a possible North Korean missile attack.

South Korea's Asiana Airlines said flight bookings from China tumbled 9.4% on the year between March 15 and 31, apparently because of Beijing's ban on group tours to the country. South Korea's second-largest carrier said it would cope with the slowdown by shifting its focus to other markets, among other measures.

"We will adjust the number of seats by changing aircraft types. We will also draw demand actively from Japan and Southeast Asia," Asiana said in a statement.

China is a key market for the airline, with routes to the country accounting for 21.1% of its passenger ticket sales last year, slightly behind Southeast Asia, at 22.3%. Sales from the Americas accounted for 19.6% of the total.

South Korea's largest cosmetics maker, AmorePacific Group, which relies heavily on the Chinese market, said it is closely watching developments between the two governments. AmorePacific strengthened its luxury makeup segment by launching the HERA brand in China last year, while its top-tier Sulwhasoo brand expanded its customer base there through department stores, roadside shops and online malls.

Analysts say Chinese restrictions on South Korean products will expand to online games, as authorities there are moving to stop approving the release of titles imported from the neighboring country. "While SARFT (the State Administration of Radio, Film, and Television) is still accepting applications for publication licenses for [South] Korean games, the review process could take a 'much longer time' now," said Nomura analyst Jialong Shi in a report. SARFT is the Chinese authority in charge of reviewing and approving imported games across all platforms, including PCs, mobile devices and consoles.

Local media reported that developers Netmarble and NCsoft are among those likely to suffer the most from Beijing's ban on South Korean online games.

"If exports to China lose their recovery momentum, that would definitely hurt overall exports as well," Kim said. "China's sanctions related to THAAD will be a discount factor, assuming it will not be resolved in the short term."

Shares in AmorePacific Group climbed 1.35% to 112,500 won after hitting a one-year low of 107,000 won on Monday. But according to Daishin Securities, the company's market cap has shrunk by over 4 trillion won since early July, when the government announced its plan to deploy the THAAD system. Its smaller rival LG Household & Health Care has lost more than 5 trillion won in market value over the same period.