After US withdrawal, other signatories to press ahead with trade deal

New Zealand's Trade Minister Todd McClay, center, is mobbed by reporters at the end of the meeting TPP11 held on the sidelines of the APEC ministers meeting being held in Hanoi, on May 21.   © Reuters
JUN YAMAZAKI and RYOHEI YASOSHIMA, Nikkei staff writersMay 21, 2017 13:59 JST | Vietnam
CopyCopied

HANOI -- Ministers from 11 countries participating in stalled negotiations for the Trans-Pacific Partnership trade agreement, excluding the United States, met in Vietnam on Sunday to affirm "the value of realizing the TPP's benefits."

Meeting on the sidelines of the Asia-Pacific Economic Cooperation talks, the ministers agreed to instruct senior officials to discuss "options to bring the comprehensive, high quality agreement into force expeditiously," with a view to further progress in November.

Leaving open the possibility that the U.S. would return to the negotiating table, the statement also said senior officials would consider measures to encourage the return of original member countries.

The U.S. is the only TPP signatory to have abandoned the trade deal. After regularly denouncing international trade agreements on the campaign trail last year, President Donald Trump withdrew the country from the TPP in February.

Sunday's statement emphasized the implementation of the TPP would "contribute positively to the economic growth prospects of its member countries."

Participating ministers also signaled their hope that the agreement would eventually expand to "include other economies that can accept the high standards of the TPP."

"The eleven countries' commitment (to the TPP) has been explicitly affirmed," Japan's economic and fiscal policy minister Nobuteru Ishihara,  told reporters in Hanoi after the meeting.

"I don't expect the U.S. will rejoin the deal so easily, but Japan will continue to work ... to return to TPP membership," he added.

Japan will host a meeting of chief negotiators from the eleven countries in July, Ishihara said.

Mexican Economy Minister Ildefonso Guajardo told reporters that all ministers from the eleven states had demonstrated a full commitment to maintain momentum toward implementing the trade deal.

At a chief negotiators meeting on Saturday, discussion heated up temporarily over differences regarding the entry into force of the agreement in each country, as well as whether changes should be made to the content of the agreement.

At the ministerial gathering on the following day, however, a draft statement devised at a chief negotiators meeting held in Canada earlier this month was adopted with few changes. The ministerial meeting ended more than 40 minutes ahead of schedule.

The full text of the statement is below. 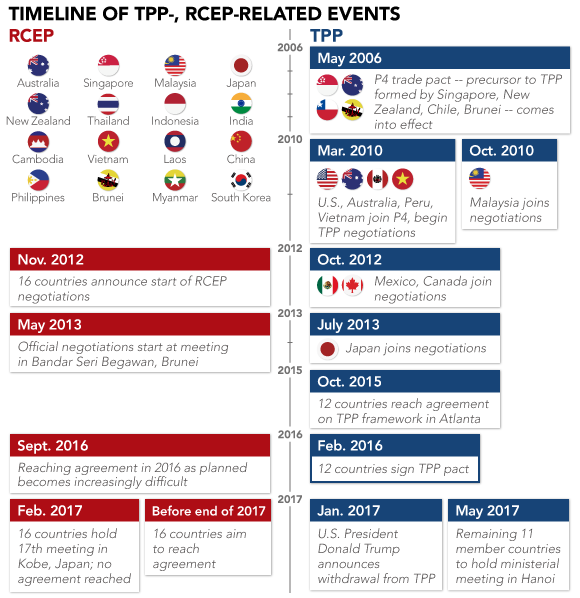