Taiwan envoy to promote peace with Xi at APEC summit 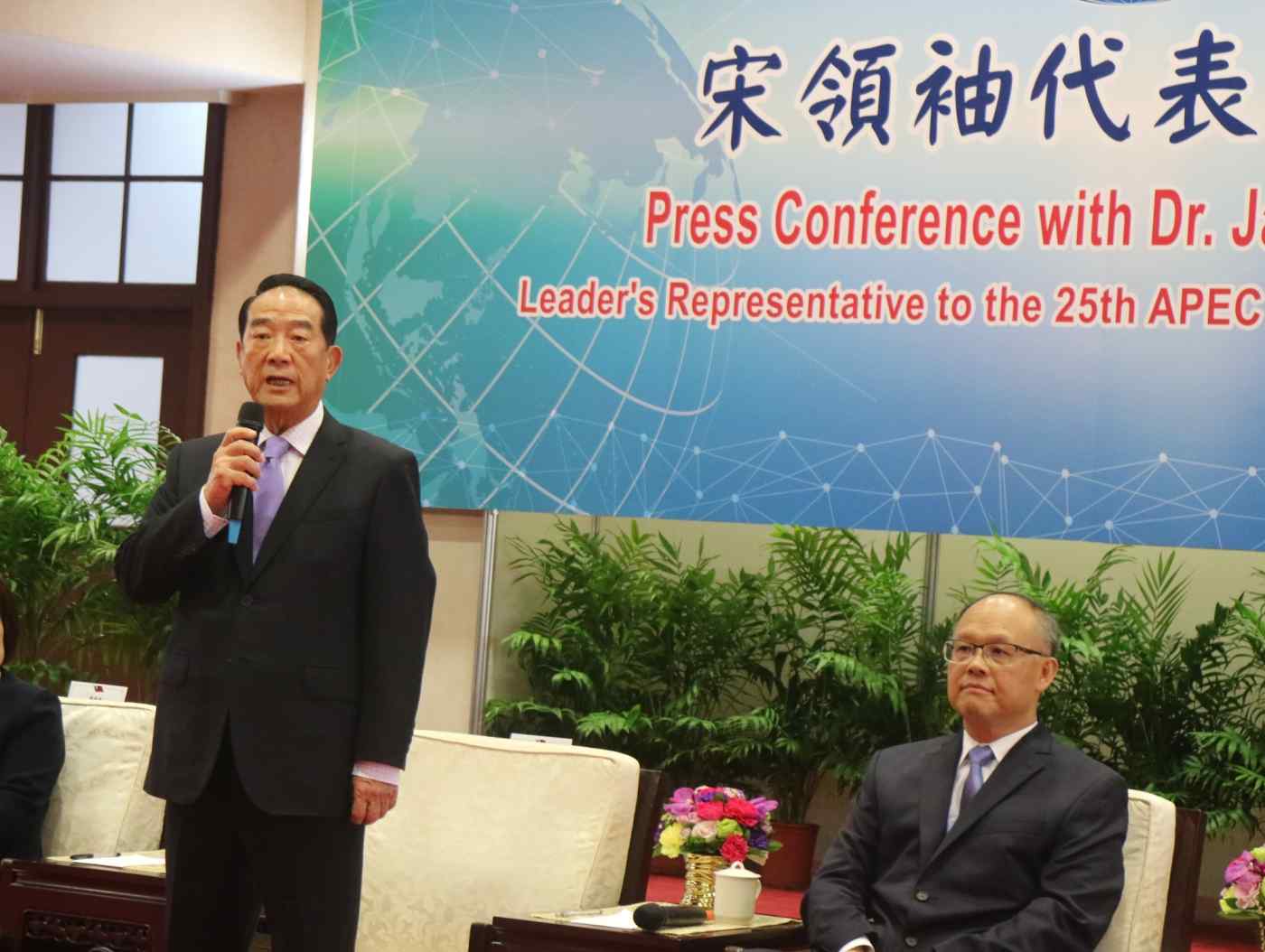 TAIPEI -- Taiwanese President Tsai Ing-wen's special envoy at the Asia-Pacific Economic Cooperation Leaders' Meeting said on Monday that he plans to convey the island's desire for peace, stability and exchange when he speaks to Chinese President Xi Jinping.

"I will clearly express to Xi that we really want to develop bilateral relations in a peaceful way," said James Soong, a veteran politician and head of the opposition People First Party.

"We really want peace and stability between the two sides," he told reporters the day before departing for the summit in the Vietnamese city of Da Nang.

"I believe that neither side wants to solve problems by force," Soong said. "I also believe the Chinese side would like to at least have some dialogue channels with Taiwan."

Soong added that his encounter with Xi would be an informal one that did not involve any political negotiations between Taipei and Beijing. In fact, no formal one-on-one meeting has been scheduled, but the two will likely run into each other and have a brief chat at some point.

China has long opposed the Taiwanese president attending international summits, fearing it would add weight to the island's claim to sovereignty. Taipei usually sends a senior political or business leader to APEC summits as a compromise.

Taiwan has been under the control of the authorities in Taipei since the end of the Chinese Civil War in 1949. Beijing, however, maintains its claim to sovereignty over the island and has never ruled out retaking it by force.

The meeting will happen less than a month after China's ruling Communist Party unveiled a new leadership lineup at its key party congress.

During the congress, Xi's rhetoric on Taipei was decidedly moderate, calling for "peaceful unification" and describing people on the two sides of the Taiwan Strait as brothers and sisters.

Relations between Taipei and Beijing have been strained since Tsai took office in May 2016 as Chinese officials see the leader and her Democratic Progressive Party as staunch supporters of independence.

Beijing has suspended the regular dialogue with Taipei forged under Taiwan's previous, pro-China government. There has also been a significant drop in the number of Chinese tourists visiting Taiwan.

Recently, the Taiwanese president has softened her approach in appealing to Chinese officials to work with the island and pushed the message that a breakthrough in cross-strait relations would benefit both sides in the long term.

Soong said he will also have plenty of opportunities to interact with U.S. delegates such as Secretary of State Rex Tillerson. He did not confirm whether there would be the chance to meet President Donald Trump, but did say he would talk with Japanese Prime Minister Shinzo Abe. His daughter Angela Soong may meet the U.S. and Chinese first ladies Melania Trump and Peng Liyuan, he added.

In 2016, Soong served as Tsai's special envoy to the APEC Economic Leaders' Meeting in Lima, Peru. During that trip, he met Russian President Vladimir Putin and leaders from the Philippines, Vietnam, Thailand, Australia, Chile, Indonesia and Papua New Guinea in addition to Xi and Abe.