Meanwhile, Trump again hints he may ditch One China policy 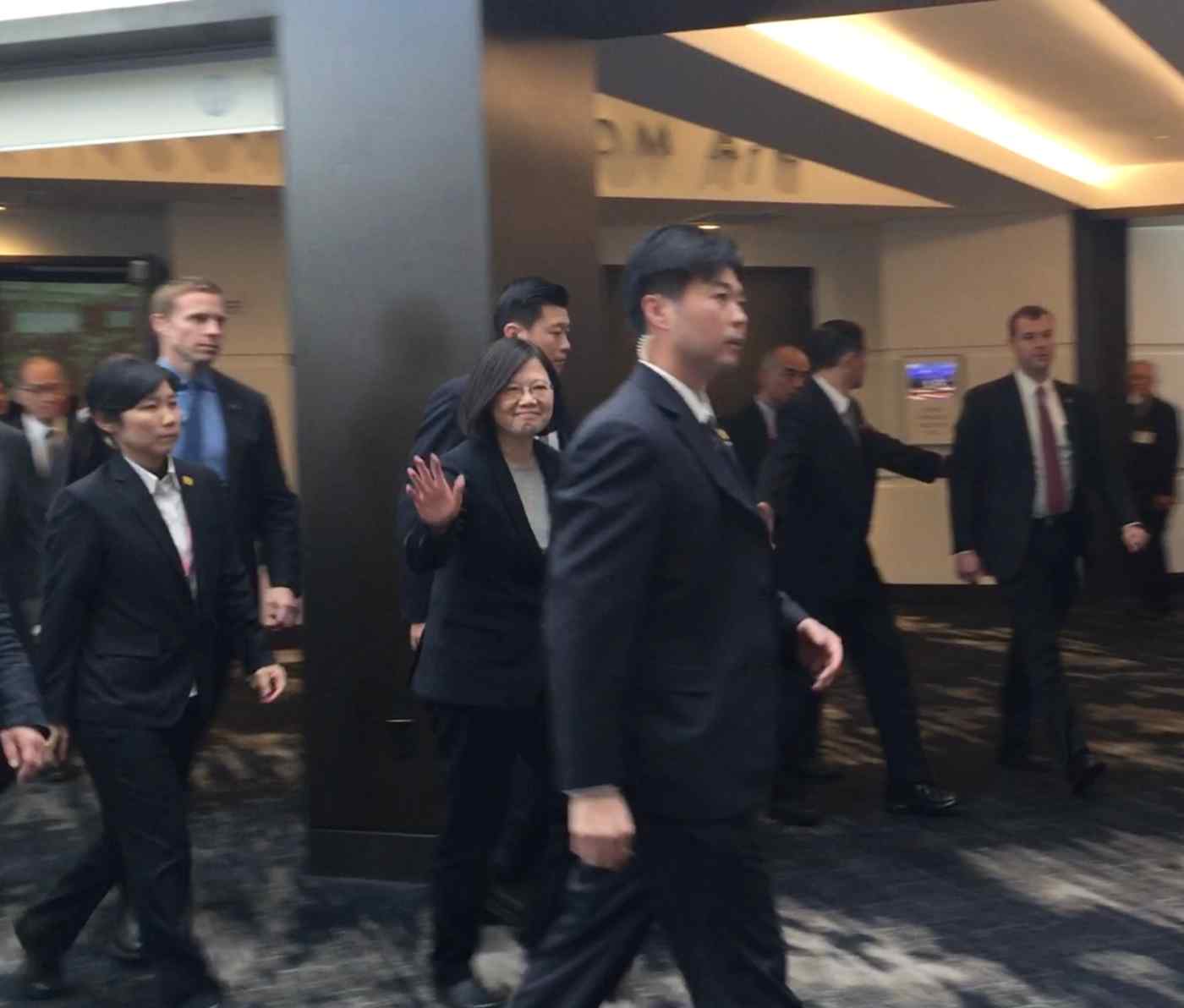 Most of Tsai's itinerary in San Francisco was not open to press coverage due to a longtime understanding between Taipei and Washington to keep U.S. transits by a Taiwanese leader discreet, partly to avoid antagonizing China.

While the U.S. and Taiwan do not have formal ties, it is customary for the Taiwanese president to make stopovers in America whenever he or she visits the island's diplomatic allies in Central America. A person familiar with the details of Tsai's layover said the Taiwanese leader made phone calls to two senior U.S. politicians, but declined to give any further details.

Despite the furtive nature of the visit, hundreds of pro-Chinese protesters rallied outside the San Francisco hotel where Tsai stayed on Saturday.

They waved the Chinese national flag and expressed their dismay at Tsai, who Beijing consider to be a staunch supporter of the island's continued independence from the mainland, denouncing her as a "troublemaker" and shouting their opposition to Taiwanese independence.

Saturday's rally was one of several attempts to tighten the screws on Tsai during her weeklong Central America tour.

On Wednesday morning Taiwan time, China's first and only aircraft carrier, the Liaoning, sailed through the Taiwan Strait while returning from an exercise in the South China Sea. The warship refrained from breaching the midline respected by the two sides but the incident nonetheless caused alarm in Taiwan.

On the same day, Chinese Foreign Minister Wang Yi used an official visit to pledge a $40 billion investment in Nigeria, in addition to the $45 billion Beijing has already injected into the African country, according to the Nigerian state news agency NAN.

Reacting to the report, Tsai said Beijing's move would only hurt its relations with Taiwan. 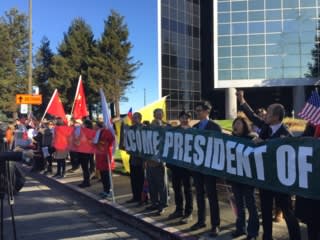 "We have noticed that mainland China has taken some measures recently...but those moves are not beneficial to the maintenance of peaceful, stable ties [between Taipei and Beijing]," Tsai told Taiwanese reporters in San Salvador on Friday, according to Taiwan's Central News Agency.

Taiwan and China split in 1949 at the conclusion of a long-running civil war. China continues to claim Taiwan as part of its own and has not renounced the prospect of using force to achieve eventual unification with the self-ruled, democratic island.

Chinese officials also vehemently object to any attempt by Taipei to forge diplomatic ties with other countries and Taiwan's participation in international events, in an effort to deny recognition of the island's sovereignty.

As a result of China's growing political and economic clout, now only 21 countries in the world recognize Taiwan. Aside from the Vatican, most are small developing countries.

Tensions between Taipei and Beijing have been on the rise since Tsai came into office in May. Chinese officials have reduced the number of tour groups permitted to visit Taiwan and suspended high-level dialogues between the two camps.

China's condemnations of Tsai did not prevent her from meeting with a number of senior U.S. politicians during a Houston transit stop at the beginning of her tour, ahead of meetings with the presidents of Honduras, Nicaragua, Guatemala and El Salvador in their respective countries.

During her layover, U.S. Senator and former presidential candidate Ted Cruz visited her in person, revealing to reporters that Chinese officials had asked him to decline a meeting with Tsai.

On her return, Tsai visited the San Francisco headquarters of social media platform Twitter and was greeted by general counsel Vijaya Gadde, though chief executive Jack Dorsey was not present for the occasion, according to the Central News Agency.

Later, Tsai attended the opening ceremony of the Asian Silicon Valley Development Agency, an initiative to help foster Taiwanese startups backed by her government. She also lunched with some 800 Taiwanese expatriates before her departure.

The Taiwanese leader's trip came as Trump and Chinese officials continue to trade barbs over bilateral relations and Beijing's unilateral claim over Taiwan.

The U.S. is Taiwan's sole arms provider and most important strategic partner in the island's defense against China. Washington is bound by law to provide Taiwan with weapons of a defensive nature.

Trump told The Wall Street Journal in an interview published on Friday that he is considering a rethink of the "One China" policy that has served as the cornerstone of bilateral ties between Washington and Beijing for four decades.

"Everything is under negotiation, including One China," Trump said when asked whether he supported the policy.

It was the second time over the last month the U.S. president-elect hinted at abandoning Washington's refusal to recognize Taiwan diplomatically in exchange for cooperation with China on various issues.

Following his comments, China's Foreign Ministry warned that any change to the One China policy would have serious consequences.

"One China principle serves as the political foundation of China-U.S. relations, and it is not negotiable," China's Foreign Ministry spokesman Lu Kang told reporters.

"We urge stakeholders in the U.S. to recognize the high sensitivity of the Taiwan issue and abide by the commitment made by previous U.S. governments, both Republican and Democratic...so there will not be any impact on the healthy and steady development of China-U.S. ties and cooperation between the two sides on important fields," Lu said.

Beijing's One China principle refers to its unilateral assertion that Taiwan belongs to China. With the One China policy, the U.S. acknowledges Beijing's stance but does not actively support the view.