BANGKOK -- A project to build a high-speed railway in Thailand based on Japan's shinkansen technology has taken an unexpected turn, with the Southeast Asian country considering a significant downgrade to cut costs.

"The 670km Thai-Japanese high-speed train project stretching from Bangkok to Chiang Mai is to have its maximum speed lowered to reduce the overall cost of the project," the English-language Bangkok Post wrote Dec. 27.

Prime Minister Prayuth Chan-ocha, who leads the country's junta, instructed transport officials to consider reducing the top speed from 300kph to between 180kph and 200kph. The development came less than two weeks after a report by Japan calculated the project's cost at 420 billion baht ($13.1 billion), a sum Bangkok deems too high. 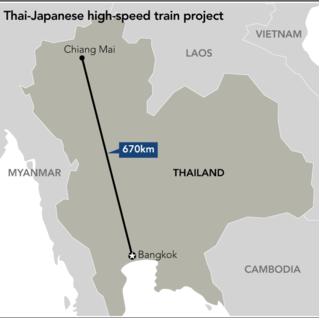 Thailand's response surprised Japan, which has spent three years working with Thai officials and engineers to introduce the shinkansen, an achievement that would aid Japan's desire to export the high-speed technology around the world. Reducing the train's speed could sap Japan's enthusiasm since the rail no longer would be a cutting-edge project.

A slower train likely would reduce some expenses, such as for building sound barriers, but laying 670km of new rails would cost nearly the same for either a high-speed or medium-speed line. Slower trains also would probably hurt profitability, as some potential customers may choose to fly.

From firsthand experience operating bullet trains since the 1960s, Japan knows that the likelihood of shinkansen losing customers to airplanes rises once travel exceeds three hours. Even at 300kph, the trip from Bangkok to the northern city of Chiang Mai would take nearly three and a half hours. Potential riders may choose low-cost flights if travel time on the train is lengthened.

The Thai government proposed a fare of only around 1,200 baht for riding the entire line -- less than one-third the price to travel an equivalent distance by shinkansen in Japan. This is low taking into consideration the differing living costs in the two countries.

Japan submitted a business plan and report based on this fare, but limited revenue could easily drive the project into the red. Reducing the train's speed to cut costs thus could prove a death sentence for the project.

Taking Japan along for the ride

Though Prayuth appears to be downgrading the project to cut costs, the move might be an attempt to draw concessions from Japan. In addition to a smaller price tag, Bangkok wants Tokyo to invest in the project to ensure Japan's long-term commitment and reduce various risks stemming from Thailand's lack of experience in operating high-speed trains.

Arkhom Termpittayapaisith, Thailand's transport minister, called a joint venture a "win-win solution." When interviewed by the Nikkei Asian Review last February, he suggested that "in order to make sure that the [shinkansen] technology is with us forever, why don't you come in and run the project together?" 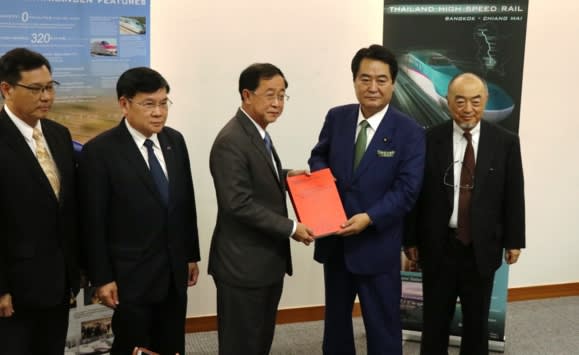 Domestic politics also may be a factor behind Prayuth's order. Former Prime Minister Yingluck Shinawatra -- whose time in office was cut short by a military coup led by Prayuth -- was sentenced to five years in prison last year, convicted of negligent supervision of a rice-subsidy program even though she fled the country before the verdict. Supporters of the ousted Yingluck criticized the courts for putting on a politically motivated trial sympathizing with the military.

A desire to prevent a future administration from taking him to court over policy mistakes under his watch may be compelling the prime minister to produce proof that he did his best in making the decision on the shinkansen project.

The Southeast Asian nation's transport ministry is scheduled to submit a proposal for the project to the cabinet by the end of March. Bargaining between the two countries may continue in the meantime. This means it is still too early to determine whether bullet trains will actually come to Thailand.