Which will resonate more: Protectionist rhetoric or talk of 'honey melons'?

BEIJING/TOKYO -- One shot down globalism, the other embraced it. One spoke of reclaiming national pride, while the other hailed the benefits of free trade and international cooperation. Coming just four days apart, the speeches by Donald Trump and Xi Jinping could hardly have been more different.

Trump was addressing a crowd at his inauguration as president in Washington. The Chinese president delivered his speech in the ski resort of Davos, Switzerland, at a gathering of some of the most influential people in the world. With China -- a nation that bars any major foreign investment in its "sensitive" industries -- advocating for global free trade, the contrast was striking.

In the run-up to the event, British bookmaker Ladbrokes took bets on which exact words the new commander-in-chief would use in his inaugural speech. ISIS, China, Russia, Japan and Asia seemed like safe bets.

In his 18-minute address, he said none of those words. Instead, it was an unmistakably inward-looking, divisive, populist speech that quickly dissolved any hopes that Trump would tone down his rhetoric once in office.

He used the word "sad," a taboo phrase in traditional political speechwriting, and described the suffering of poor American families as "carnage." The light rain that started to fall during the event only added to the somber tone.

Satohiro Akimoto, head of strategic consultancy Washington Insights, was struck by the difference between this address and the victory speech Trump gave on election night last November. "This time, he said nothing to heal the rifts in the country or to make peace with his opponents. He distanced himself from both the Democratic Party and his own Republican Party. He criticized everyone in Washington."

Some 6,700km away, in the Swiss mountains, Xi surprised the world in a different way, addressing the World Economic Forum on Jan. 17 with an eloquent speech that quoted traditional Chinese sayings, English writer Charles Dickens and the founder of the Red Cross, Henry Dunant.

While Xi's 50-minute address contained little new policy, the symbolism, the timing and the words he chose to describe how his country views the world were striking. Here was a leader eager to fill whatever power vacuum the new U.S. president was going to leave.

"Honey melons hang on bitter vines; sweet dates grow on thistles and thorns. In a philosophical sense, nothing is perfect in the world," Xi told his audience. "One would fail to see the full picture if he claims something is perfect because of its merits, or if he views something as useless just because of its defects. It is true that economic globalization has created new problems, but this is no justification to write economic globalization off completely."

The poetic language suggested that Xi had added a new speechwriter to his usual close-knit staff of party elites.

He also talked about China's own reservations about economic globalism and its hesitation about joining the World Trade Organization. China eventually joined the WTO in 2001, and it "has proved to be a right strategic choice," he said. Today, exports make up 22% of China's GDP, significantly higher than the 4.3% it was in 1960. Trade is crucial to the Communist Party's political survival.

In a swipe at Trump, Xi said: "Pursuing protectionism is like locking oneself in a dark room. While wind and rain may be kept outside, that dark room will also block light and air. No one will emerge as a winner in a trade war."

The Chinese government and the WEF began discussing Xi's possible attendance at Davos sometime around May 2016. The event is normally held around Jan. 25, and traditionally convenes after the inauguration of a U.S. president following an election year. To accommodate Xi however, organizers agreed to move the gathering forward to Jan. 17-20, to avoid the Chinese New Year on Jan. 28.

Xi and his team initially expected to attend Davos just before Hillary Clinton's inauguration as president. Yet the vote for Brexit in the U.K. in June and Trump's ensuing victory in the U.S. drastically changed the landscape facing them. Here was an unprecedented opportunity to portray Xi as one of the few global leaders who had not succumbed to populism and protectionism.

Xi's team decided to fill the itinerary of his Swiss trip with more "global leader" appearances, including a visit to the offices of the United Nations and the World Health Organization in Geneva and the International Olympic Committee's headquarters in Lausanne.

"All countries should jointly shape the future of the world, write international rules, manage global affairs and ensure that development outcomes are shared by all," he said at the U.N. office.

Xi's grand tour of Switzerland -- where Premier Zhou Enlai headed a Chinese delegation to the Geneva Conference in 1954, signaling China's debut on the international stage -- was carefully choreographed to boost the president's credentials ahead of the party congress to be held in autumn, where the country's leadership for the next five years will be decided. Xi, who is up for a second term, is expected to solidify his one-man rule.

"To hold the party congress in a victorious fashion, this year's Chinese diplomacy will create an even more favorable external environment," Foreign Minister Wang Yi told reporters after Davos.

The choreography continues. In his Davos speech, Xi announced he will host a gathering in May of leaders involved in China's Belt and Road Initiative -- a plan to build infrastructure across Asia and create an economic area centered on China. Philippine President Rodrigo Duterte immediately announced that he will be attending.

In August, Foreign Minister Wang will attend the ASEAN Regional Forum hosted by Duterte in Manila, where China and members of the Association of Southeast Asian Nations are expected to agree on a binding code of conduct in the South China Sea. Following China's defeat in a case heard by an international tribunal -- arguably Beijing's biggest diplomatic setback of 2016 -- Xi likely wants to prevent the South China Sea from becoming a hot topic before he is anointed for a second term.

And in September, Xi will host the BRICS leaders' summit in Xiamen, a city in Fujian Province, where he spent 17 years as a local official. The idea, apparently, is to show how much Xiamen's favorite son has progressed. 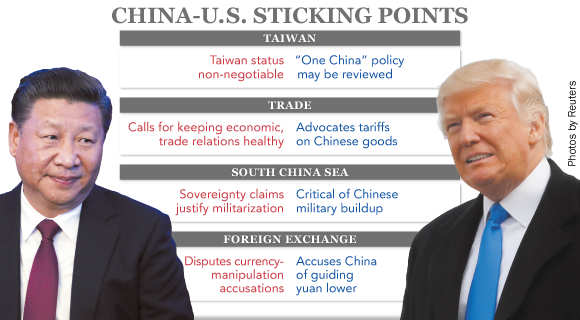 Meanwhile, on his first day in office, Trump announced via the White House website the withdrawal of the U.S. from the Trans-Pacific Partnership and his intention to renegotiate the North American Free Trade Agreement.

Companies with operations in both the U.S. and China will be carefully watching these developments. In Davos, Asian business leaders were peppered with questions about how they will respond to the new "Trump world."

Among them was Jack Ma Yun. The CEO of Chinese e-commerce giant Alibaba Group Holding has had a busy month, first visiting New York for a meeting with Trump on Jan. 9, then appearing in Davos as part of Xi's massive business delegation.

It was clear where Ma's allegiance were. "American international companies made millions and millions of dollars from globalization," he said in Davos. "The question is: Where did that money go? In the past 30 years, America has had 13 wars at a cost of $14.2 trillion. That's where the money went," he said sharply.

China's richest man, Dalian Wanda Group Chairman Wang Jianlin, was also at Davos. Last year, he went on a buying spree in Hollywood, acquiring Legendary Entertainment and Dick Clark Productions. Wang urged the U.S. not to erect barriers against Chinese investment into Hollywood. "We don't interfere with the content," he said. "I just want the profit."

Wang said he has asked former Sen. Christopher Dodd, now chairman of the Motion Picture Association of America, to carry a message to Trump urging him to "leave the entertainment industry alone."

Amid the global turmoil, China's economy has been enjoying a relatively positive few months. Stock prices have stabilized and consumption is healthy. "The biggest risk ahead for China is the direction of U.S.-China relations," said Shingo Ito, the head of the China team at Mizuho Research Institute.

There are several aspects to that risk: Trump labeling China as a currency manipulator, his threat to impose a 45% tariff on Chinese-made goods and higher U.S. interest rates, which could accelerate capital flight from China. Any of these could easily force Xi to abandon his lofty rhetoric and put China back on a protectionist path.

Davos closed with a session with former U.S. Secretary of State Henry Kissinger, who paved the way for President Richard Nixon's historic visit to China in 1972. Xi's speech, Kissinger said, "was an assertion by China of participating in the construction of an international order."

Former President Barack Obama, he said, had begun to withdraw not only from places in which the U.S. was over-extended but "even places in which its contribution remained essential."

That long-term trend, according to Kissinger, leaves a quandary for Obama's successor: "President Trump will have to find a definition of the American role ... and define what and where America can lead."