TOKYO -- Fresh from a surveillance flight over the South China Sea, the new U.S. Navy commander in charge of all ships in the Pacific recently landed in Tokyo to meet with the top echelon of Japan's defense establishment.

Admiral Scott Swift, commander of the U.S. Pacific Fleet, who assumed his position in May, sat down with reporters Tuesday to discuss his views on China's island-building activities in the South China Sea as well as Japan's new security bills, intended to strengthen the country's support of U.S. military activities abroad.

"With commercial satellites, we can see there is still quite a bit of activity," Swift said regarding China's building up of seven reefs, among the hotly contested Spratly Islands. "China has said actual (construction of) buildings on the island will continue. The more important thing is, despite what we can observe directly, we can't predict what the intent is."

In a white paper released Tuesday, Japan's Defense Ministry noted that China is believed to be constructing a runway, port and other infrastructure on the reefs in an apparent attempt to shift the status quo and bolster its claim over nearly the whole of the South China Sea.

Before arriving in Japan, the admiral took part in a seven-hour surveillance mission on a P-8A Poseidon aircraft over the South China Sea. He witnessed firsthand the full range of the Poseidon's capabilities.

"The first thing we seek is a positive relationship with China," Swift said. "We have much more in common than we do in competition." Yet he was clear in his belief that China has to be more open with its intentions.

"There is a lack of transparency," he said. "It's so important to deepen our relationship. We seek a positive relationship with China to understand what the intent is." 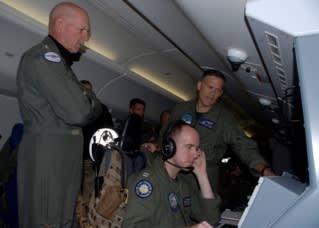 On what the Navy can and will do in a contingency between Japan and China regarding the Senkaku Islands, which the Chinese call Diaoyu, the admiral said, "We are ready to respond, as we might be called to respond by the president of the United States about what we will do and what we won't do."

President Barack Obama has said the U.S. regards the Senkaku Islands as falling under the purview of the U.S.-Japan security treaty, meaning any attack on the islands would be perceived as equivalent to an attack on the U.S.

Regarding the security bills that passed Japan's lower house, Swift said, "If they were to become law, the relationship between the Pacific Fleet and Japan's Maritime Self-Defense Force will take an evolutionary, rather than a revolutionary, step. We already have a very deep, long historical relationship, in particular [between] our maritime forces."

On what visible changes the new laws will bring about, he said, "I prefer that the Japanese government and people determine what [they] exactly mean."