IWO JIMA, Japan -- Flight crews who used to work with U.S. Navy pilot John Pitta know how talkative he could be in the cockpit. As his FA-18 would approach the deck of an aircraft carrier, Pitta's chatting would begin.

Landing a fighter jet speeding along at 200kph on a 30-meter wide strip of concrete without clipping any of the 70 aircraft or 300 support personnel crammed onto the deck is no small task. Navy pilots repeat these landings until they can perform them without having to think. "We call it muscle memory," said Pitta, now the assistant chief of staff for operations, plans and training at U.S. Naval Forces Japan. "Your body just makes it happen."

It is a perishable skill. Therefore, by rule, if a Navy pilot has not flown for a certain period, he or she must undergo landing practice on land before going out to sea. The Navy recently invited the Nikkei Asian Review to Iwo Jima to observe field carrier landing practice by the air wing attached to the USS Ronald Reagan. Iwo Jima is roughly 1,200km south of Tokyo. An F/A-18 conducts field carrier landing practice on Iwo Jima in May 2016. (Photo by Ken Moriyasu)

Field carrier landing practice generates a tremendous amount of noise. The Navy's most advanced FA-18 Super Hornets descend on the airstrip and, at the point of contact with the ground, go full throttle back into the air. This "touch and go" exercise mimics the actual landing on a ship.

At sea, the pilots are required to hook their tails onto a steel arrest wire placed 4 meters from the end of the ship. The plane goes into full throttle at the point of landing to prevent it from falling off the other end of the carrier if it fails to grab the wire.

It is considered one of the most difficult maneuvers a Navy pilot will ever do. By design, if the ship is moving, the landing deck always glides to the right. Waves can cause the deck to jolt up by 3 meters, and often in a figure eight.

The U.S. Navy has been using aircraft carriers for nearly 100 years. Call it a history of trial and error, one not without painful accidents. Through this process, the Navy has arrived at a rule that says if a pilot has been away from carrier landing for 29 days, he or she must first undergo training on land, then move to training at sea within 10 days. 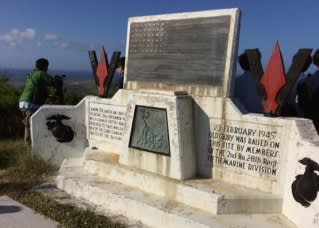 Iwo Jima was the site of heavy fighting between the U.S. and Japan during World War II.

For the 100 pilots of the Reagan to be ready for summer patrol, the Navy must conduct 4,200 touch and gos. The remote Iwo Jima is ideal for this training, conducted during the day and at night. The Navy could only carry out the drills at bases in Japan with significant restrictions.

On Iwo Jima, the FA-18s can approach the runway at a height of 180 meters -- close to what would be required at sea. At Naval Air Facility Atsugi, in Kanagawa Prefecture, next to Tokyo, pilots would have to descend from a height of 460 meters in an effort to reduce noise levels. The drills were conducted at Atsugi in 2007 and 2012 due to unfavorable weather conditions at Iwo Jima.

The arrangement left something to be desired. It "is like hitting a golf ball off a 7.5cm tee instead of a 3cm tee," Pitta said. "It messes up your muscle memory." Iwo Jima is not without its own challenges. With no alternative landing strips in the vicinity, pilots are at risk if there is damage to the runway. Furthermore, when the Reagan's air wing, Carrier Air Wing Five, relocates its home base from Atsugi to Iwakuni, in western Japan, sometime next year, the distance to Iwo Jima will increase by 160km, furthering the risk that pilots face.

As such, the Navy and Japanese government have been looking for an alternative, permanent location for field carrier landing practice that can be used year round and is closer to Iwakuni.

In the U.S., the Navy has nine such airstrips on the West Coast alone. The single Iwo Jima location forces the Navy to cram in the training, considering that all 100 pilots have to fly out to sea within 10 days of concluding the field drills.

The island of Mageshima, off Japan's southwesternmost main island of Kyushu and part of Kagoshima Prefecture, has been mentioned as a destination, but local authorities oppose hosting the drills due to the noise they would bring.

A resident near the Atsugi base told the Nikkei Asian Review about the pain of living near the airstrip. "The day we moved here, I could not believe the decibel level. The ground beneath my feet shook," the man, in his 40s, said.

In terms of radio communication, the drills are conducted in utter silence. Fifteen fighters circling in the air above the ship fly down one by one without orders from traffic control. To avoid enemy eavesdropping, there is no radio communication within the ship, including among those working frantically on the deck. Just silence. "It is like a ballet," Pitta said.

China, which possesses one aircraft carrier and is said to be preparing two more, will have to give its pilots and flight crews similar training if it is to have an operational carrier fleet.

"The air strike power of the aircraft carrier is one of the core pillars of the Japan-U.S. security alliance," said Tetsuo Kotani, chief researcher at the Japan Institute of International Affairs, a think tank. "Maximizing the strength of the carrier air wing is vital to maintaining the peace and security of Japan and Asia."

While Kotani acknowledged the noise damage that these planes bring, he noted that the Navy has been sincere in trying to reduce the pollution. "Moving the air wing to Iwakuni, far from the carrier in Yokosuka, also in Kanagawa, goes against Navy rules," he said. "But they are doing it as an exception. They are being considerate."