US and China hold secret talks over the North Korean crisis TOKYO -- The North Korean crisis is expected to reach critical mass this year as Pyongyang closes in on development of a missile capable of hitting the U.S. mainland.

There are two worst-case scenarios for Japan and South Korea. One would be for U.S. President Donald Trump to attack North Korea without consulting nations in Northeast Asia. The second would be the U.S. and China repeating clandestine talks about war scenarios while leaving Tokyo and Seoul clueless.

Neither scenario can be ignored. While the first has been mentioned repeatedly, signs of the second are beginning to emerge, triggered by U.S. Secretary of State Rex Tillerson's bombshell statement on Dec. 12.

"We have had conversations that if something happened [on the Korean Peninsula] and we had to go across a line, we have given the Chinese assurances we would go back and retreat back to the south of the 38th parallel [when conditions permit]," Tillerson said in a speech in Washington.

Tillerson's statement, if true, means the U.S. and China have already been discussing contingencies should North Korea collapse, or if war with the reclusive nation becomes unavoidable.

But more U.S.-China dialogue is not bad for Asian security. If the U.S. attacks North Korea without consulting China, Beijing may have to counter with a military response of its own, increasing the risk of unintended war between the two giants.

According to sources well-versed in U.S.-China relations, Beijing had consistently refused talks with Washington regarding a possible collapse of North Korea. China had its reasons, fearing that Kim Jong Un, supreme leader of North Korea, might have become enraged and even more intractable had he realized Beijing was entertaining thoughts of his regime's demise. In addition, China had yet to decide on whether it would support reunification of the Korean Peninsula.

During the terms of former Presidents George W. Bush and Barack Obama, a U.S. government official lamented that China -- despite frequent U.S. requests -- would never agree to talks regarding contingencies in the event of a North Korean collapse.

China revising its stance could drastically change the dynamics of the brewing crisis. A look backstage into Sino-U.S. talks points to signs of more secret dialogue, perhaps in preparation for a further deterioration of the situation.

Since U.S. Marine Corps Gen. Joseph Dunford, chairman of the Joint Chiefs of Staff, visited China in late August, Beijing has begun talking with Washington about China's stance on the North Korean crisis. 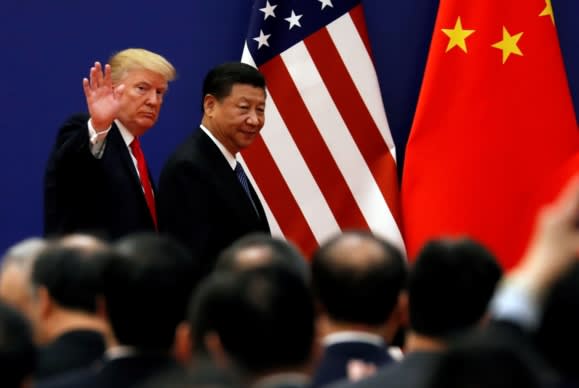 The U.S.-China summit was a success in presenting a spectacular show.   © Reuters

The sources also said that Trump and Chinese President Xi Jinping agreed at their meeting in early November to discuss not only sanctions and other pressing North Korean issues, but also medium- and long-term measures. High-ranking U.S. and Chinese officials have been quietly discussing the latter, they said.

Washington and Beijing had reportedly worked together more closely than ever for new North Korean sanctions, which were adopted by the United Nations Security Council on Dec. 23, indicating behind-the-scene collaboration.

China's recent talks with the U.S. could be signs that Beijing's relations with Pyongyang have cooled to the point that it no longer worries about displeasing Kim.

Beijing may also feel it necessary to hold talks with the U.S. in order to prevent the Trump administration from unilateral military action. This could be behind Trump's praise of Xi as "a great leader."

It is not bad for the U.S. and China to launch bilateral talks over North Korea for the sake of preventing an unintended military clash. The problem is that both Japan and South Korea -- both staunch allies of the U.S. -- are hardly informed of developments.

The U.S. did not disclose detailed information, including whether it has held any talks with China on countermeasures in case of emergency, in response to inquiries from Japan and South Korea, according to people familiar with the matter.

Trump watching whether Xi toughens on North Korea as promised

The U.S. and China seem eager to take the initiative as big powers without much involvement by other nations, not only over North Korea but also as regards the longer-term strategic vision of Northeast Asia.

But neither the U.S. or China can benefit from this approach because they cannot deal with any crisis on the Korean Peninsula without the close cooperation of Japan and South Korea.

There are far too many issues for the U.S. and China to cope with alone in case of war. These include: how U.S., Chinese and South Korean armed forces should be mobilized; how Japan should provide logistical support; how to recover nuclear weapons in North Korean and manage them; how to deal with the flood of refugees; and how to occupy, govern and rehabilitate North Korea.

There have been numerous cases in history when great powers made deals to determine spheres of influence in disregard of smaller nations. World War II resulted in postwar divisions of Europe and Asia under the Yalta agreement, a secret pact concluded by the U.S., Britain and the Soviet Union.

Great powers alone may once again determine the future of a region -- this time the Korean Peninsula. To avoid this, Japan and South Korea should reaffirm their alliance with the U.S. and more strongly urge the Trump administration not to conclude a secret deal with China. Whether such diplomatic efforts succeed will determine how the North Korean crisis plays out and, by extension, the new Asian order.