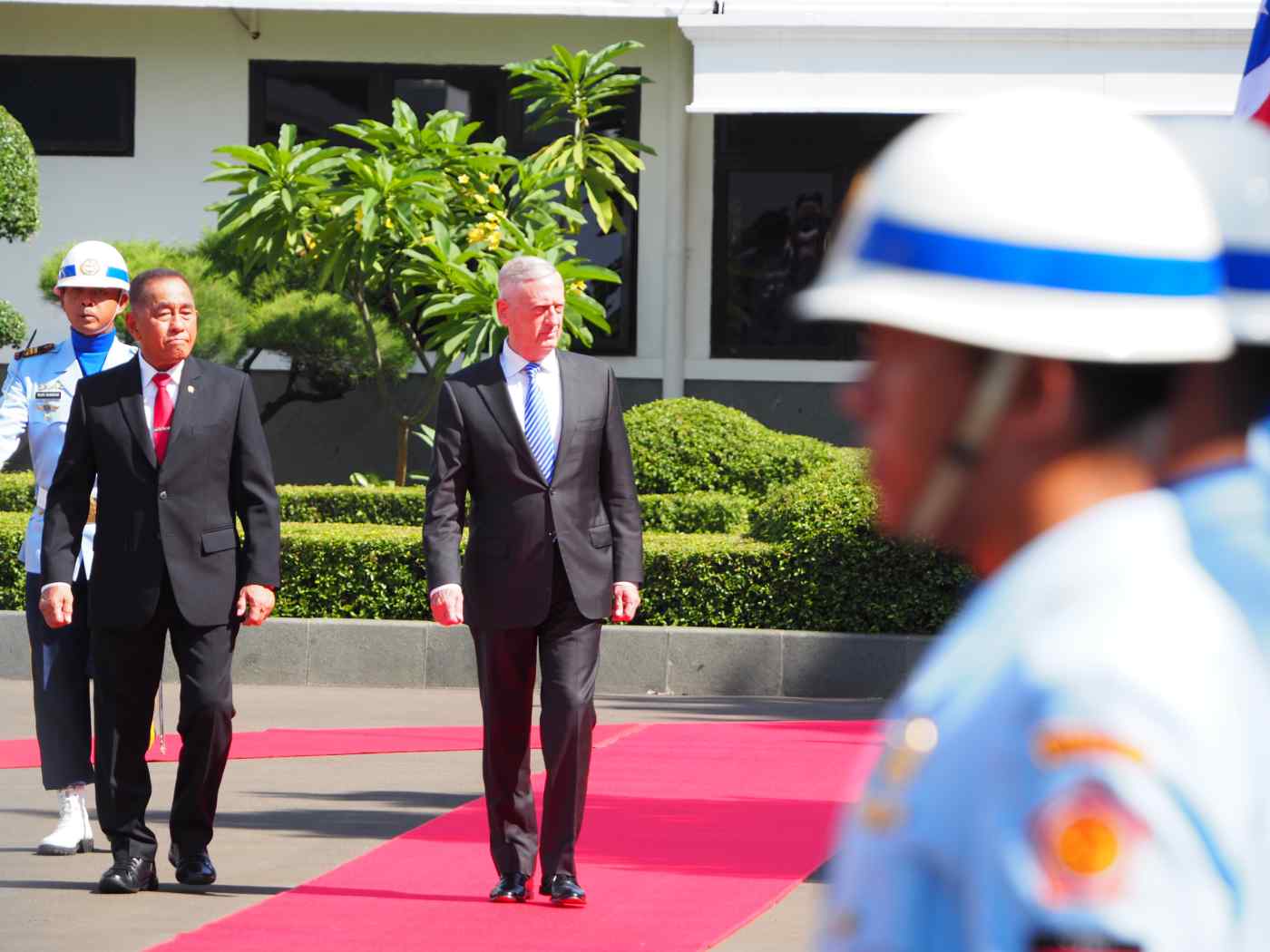 JAKARTA -- U.S. Defense Secretary James Mattis' visit to Indonesia highlights the rising importance of security in the South China Sea to the Donald Trump administration, which is seeking to engage Indonesia and the ASEAN regional grouping to counter China's expanding presence in the region.

Mattis arrived in Jakarta on Monday and met with Indonesian Defense Minister Ryamizard Ryacudu on Tuesday morning, prior to a scheduled meeting with Indonesian President Joko Widodo later in the day.

He told the press after the meeting with Ryacudu that the U.S. was "deeply committed to the Indo-Pacific region", a term that has been promoted by the U.S. and Japan to involve India and Australia in a new regional order to counter China's expanding influence across the Indian and Pacific Oceans, including the highly-disputed South China Sea.

The South China Sea is high on the agenda for Mattis' one-week visit to Asia, which will also include Vietnam. The tour kicked off just a few days after Mattis last Friday unveiled the U.S.' first new defense strategy in a decade -- saying that "great power competition, not terrorism" will now be the main focus of its national security policy.

He said his country was facing growing threats from "revisionist powers" China and Russia -- that "seek to create a world consistent with their authoritarian models". Beijing has countered by saying it seeks "global partnership, not global dominance" and calling the U.S. outlook "a cold war, zero-sum game mindset". In Jakarta, Mattis expressed a wish to enlist Indonesia and other members of the Association of Southeast Nation Nations to counter China's expanding presence in the region. He earlier mentioned the importance of maritime cooperation with Indonesia, the world's "largest archipelago stretching across the South China Sea and ... all the way to the Indian Ocean," and on Tuesday highlighted the country's leadership role within ASEAN.

"We think we must work together. And we see ASEAN -- in which Indonesia is [a] founding member -- is central to maintaining the security here," he said.

But while half of ASEAN's member states have been involved in disputes with China over the South China Sea, the other half have been heavily reliant on financial support from Beijing. Chinese funds also have proven effective in softening the stance of rival South China Sea claimant the Philippines under President Rodrigo Duterte.

Indonesia repeatedly said it was not a claimant to the territory, but its exclusive economic zone off the Natuna Islands overlaps with the southern reaches of China's self-proclaimed "nine-dash line" that claims virtually all of the sea.

At the same time, Indonesian officials have been actively courting Chinese investment to support President Widodo's ambitious infrastructure push, which Beijing only seems happy to oblige. Talks have intensified over the past year on joint projects under China's expansive Belt and Road Initiative -- despite some observers' warnings against Beijing's strategic intentions in specific relation to the South China Sea.

Mattis on Tuesday recognized Jakarta's renaming of the waters off Natuna as the North Natuna Sea, a move that sparked the ire of Beijing last year. China has called the area its traditional fishing ground.

"We can help at maintaining the maritime domain awareness in the South China Sea, the North Natuna Sea," he said. "We want to maintain the ocean in a peaceful mode so it can retain the option of making all nations prosperous regardless of the size of those nations."

Mattis' visit also came a week after a U.S. warship came within 12 nautical miles of the disputed Huangyan Island, or Scarborough Shoal, in the South China Sea. The U.S. has occasionally patrolled the region under its so-called "freedom of navigation" patrols. Beijing immediately protested against the latest incident, calling it "provocative" and an "excuse to hurt China's sovereignty and security interests."

Mattis fired back on Tuesday, saying that the U.S. abides by the United Nations Convention on the Law of the Sea, even though it is not a signatory to it.

"You're correct, we've not ratified [UNCLOS]," Mattis said, responding to a journalist's question on the subject. "However, we do live by it, unlike some nations that have ratified it [but] do not live by it," he added, in an apparent reference to China.

He added the U.S. would support Indonesia's vision to become a global maritime fulcrum through enhanced maritime cooperation, saying the development is "very, very critical" as part of measures to ensure peace and security in the Indo-Pacific. With the maritime fulcrum ambition requiring the development of more sea ports and the country's maritime sector more generally, the Widodo administration has increasingly been seeking to benefit from China's BRI and its investment opportunities.

Indonesia seems to still be treading carefully over the South China Sea, where it has for years sought to be a neutral player, and amid Jakarta's need to lure Chinese investment to support its infrastructure ambitions.

"[Tension over] the South China Sea has eased because we have often met [to discuss the situation] -- between ASEAN [and China]," Ryacudu said.

Mattis will head to Vietnam on Wednesday. Prior to arriving in Jakarta, he told American journalists on his plane that the South China Sea would also be the main topic of discussion in Hanoi, including "freedom of navigation ... the respect for international rule of law and respect for national sovereignty."

Apart from the South China Sea, Mattis and Ryacudu on Tuesday discussed the topics of North Korea, Islamic State threats in the region, and the persecution of the Rohingya Muslim minority in Myanmar.

Meanwhile, Indonesian Foreign Minister Retno Marsudi at a meeting with Mattis on Monday evening reminded the U.S. of the importance of the two-state solution in dealing with events in Israel and Palestine. Referring to the recent decision by the U.S. to move its embassy to Jerusalem, she said East Jerusalem should be the capital of Palestine under the two-state solution, and that Indonesia will keep supporting Palestine's fight for independence.