Venezuela crisis lets China and Russia maneuver in US backyard SAO PAULO -- Venezuela's debt crisis has given China, the troubled country's No. 1 creditor, and Russia a golden opportunity to expand their economic -- and possibly military -- influence in the Americas. The new triangle could have serious strategic implications for the U.S.

Despite sitting on the world's largest oil reserves, Venezuela's economy is collapsing under the burden of some $130 billion in debt. The U.S., which tolerated anti-American rhetoric from the country's leftist government for years after Hugo Chavez took power in 1999, has adopted a tougher stance of late.

Over the past decade, Beijing has loaned Venezuela a whopping $65 billion to help finance infrastructure and other projects. Now Russia, a key creditor, has swooped in bearing debt relief.

On Nov. 15, Russia and Venezuela signed a debt restructuring deal that will allow Caracas to repay a total of $3.15 billion to Moscow over a 10-year period, with "minimal repayments" in the first six years. Asked about the deal that day in Moscow, Russian Foreign Minister Sergey Lavrov stressed the two countries are pursuing "mutually beneficial" relations.

Lavrov parried a question on whether there would be more assistance to come. Bare shelves at a Caracas supermarket reflect the depths of the country's economic crisis.   © Reuters

"I don't quite understand the second question," he said. "What does 'Will Russia continue to assist Venezuela?' mean? We are developing mutually beneficial relations with Venezuela as we do with other countries."

The agreement came two days after S&P Global Ratings and Fitch Ratings declared Venezuela in selective default because the cash-strapped country had missed a deadline for paying interest on certain bonds.

For Russian President Vladimir Putin, who by all appearances is working to undercut U.S. strategies on Syria and North Korea, Venezuela could hold significant geopolitical value. The president is reportedly demanding that Venezuela allow Russian warships to anchor at its ports in return for assistance.

If Caracas agrees, Russia would have a new military foothold in America's backyard.

China and Russia hold the key to saving Venezuela from default

Is OPEC about to make the biggest mistake of the year?

Already, in August, Venezuelan President Nicolas Maduro announced military cooperation with Russia. Maduro, who succeeded the late Chavez, said the strategic partnership would help fend off the "military threat" from the U.S.

Russia's deepening ties with Venezuela extend to the oil sector, again with possible ramifications for the U.S.

A key question is how China will play its cards.

Venezuela produces heavy oil for refining in China. The South American country expects economic help from China in return for access to its rich resources, and sees Beijing as an important partner for dealing with the U.S.

But as Venezuela has fallen into arrears on debt payments in recent years, Chinese investment in the country has declined. In 2016, China invested a third of the peak amount.

China has said little about the ongoing debt crisis. Asked about the situation on Nov. 16, Foreign Ministry spokesman Geng Shuang only said, "We believe that Venezuela's government and people have the ability to properly handle their debt issue."

Still, Beijing is unlikely to abandon the South American country, since its ties were forged for the long term, according to Margaret Myers, director of the Latin America and the World Program at the Inter-American Dialogue.

Even as it relies on China and Russia, Venezuela's fate is still very much linked to the focus of its harsh rhetoric: the U.S.

Venezuela raises considerable sums of money on Wall Street, and the U.S. is the biggest buyer of its oil -- which accounts for 95% of its total exports. Venezuela cannot function without America's financial and oil industries. 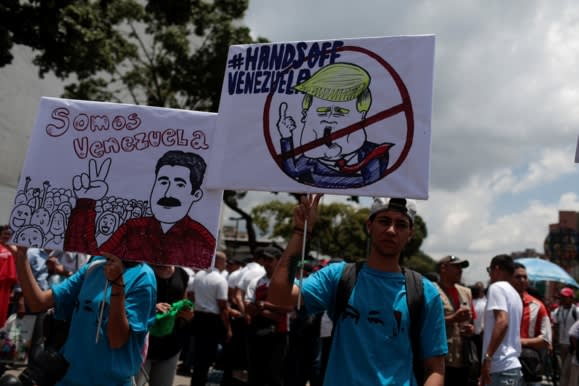 Pro-Maduro, anti-Trump demonstrators hold placards at a rally against imperialism in Caracas in September.   © Reuters

The anti-Americanism of the Chavez-Maduro era has been a thorn in Washington's side, but since Venezuela accounts for nearly 10% of U.S. crude imports, successive administrations have avoided taking punitive action. But President Donald Trump has started making its displeasure clear.

The U.S. has declared it considers "the Venezuelan National Constituent Assembly the illegitimate product of a flawed process designed by the Maduro dictatorship to further its assault on democracy." In August, the U.S. Treasury Department announced sanctions against the Maduro administration, banning new loans to Venezuela and purchases of new bonds from the country's government.

The Trump administration has also balked at participating in a bailout for the country, saying it would violate the sanctions. As a result, few Western financial institutions have joined the debt restructuring effort, causing talks to fizzle.

The strong pressure from Trump is making the debt crisis more acute. This will only increase the South American country's dependence on Russia and China, with unpredictable consequences for Washington.