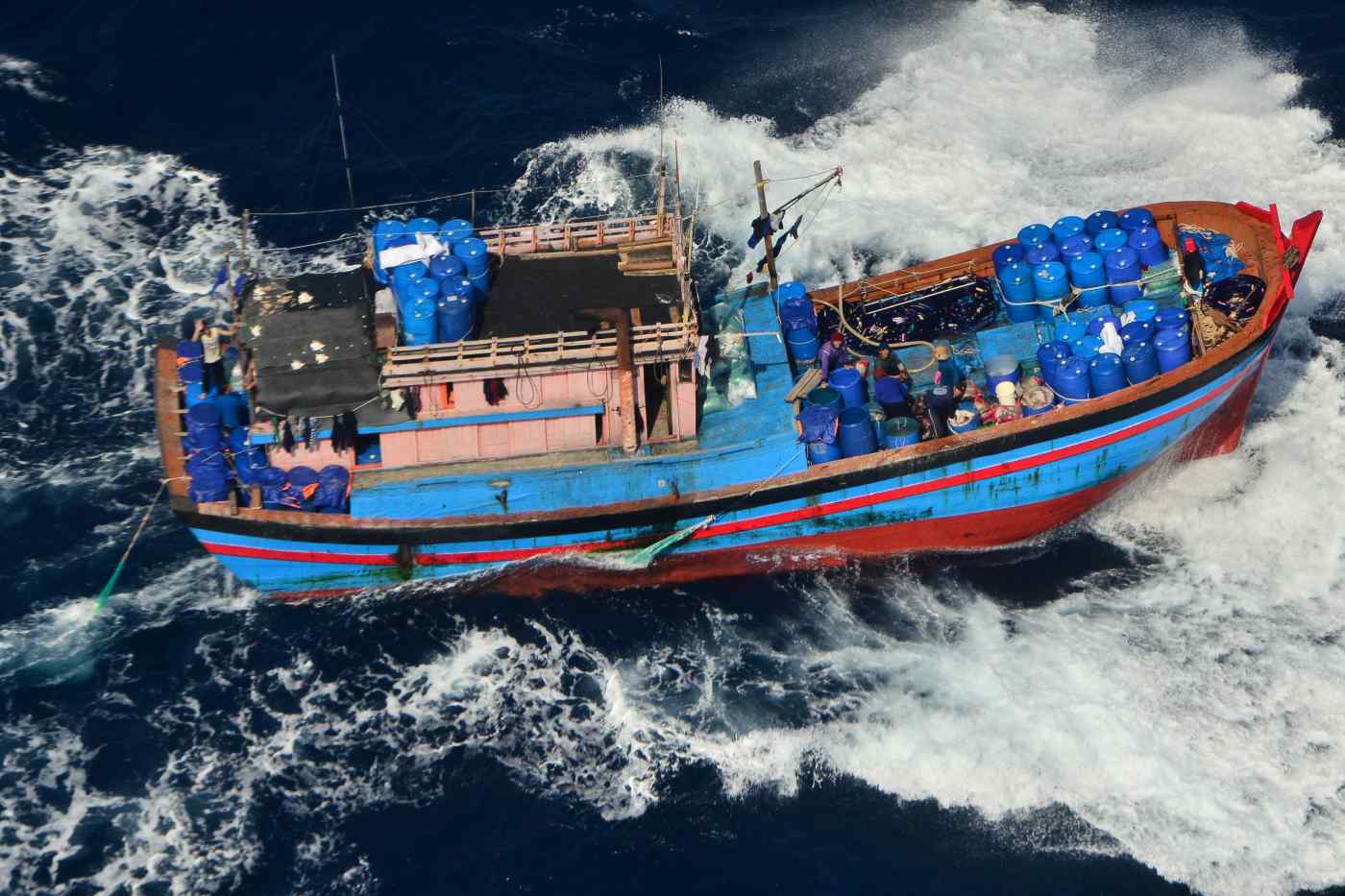 AUCKLAND -- Fleets of small and cheap wooden boats from Vietnam are being accused of plundering marine reef resources in Australia and the South Pacific, prompting countries in the region to discuss anti-poaching measures.

The Forum Fisheries Agency, which represents 17 Pacific nations, plans a meeting in April or May to review allegations that national sovereignty is being undermined by blue boats fishing within territorial waters.

Sea cucumbers, under threat in much of Asia, can fetch around $230 per dried kilogram in Hong Kong and mainland China -- a price that offers hefty returns for fishing fleets using rudimentary boats that cost around $12,000 each.

Steven Purcell, a senior research fellow in fisheries ecology at Australia's Southern Cross University, said that valuable marine species in waters off northern Australia are at increasing risk from poachers because they sell for high prices, are easy to catch and weakly protected.

Purcell said sea cucumbers, one of the "lootable resources" most at risk, play a crucial role in the health of coral reef systems. "This is important at a time when reefs are facing intense stress from climate change and coastal development," he said.

The Australian Fisheries Management Authority said the number of foreign fishing boats caught operating illegally in Australian waters increased from six in 2014 to between 15 and 20 in 2016. Most were from Vietnam and Indonesia. AFMA said that 161 Vietnamese illegal fishing operatives have been apprehended in northeastern Australian waters since March 1, 2016.

AFMA also said that two Vietnamese boats and 29 crew had been caught in mid-February near the Saumarez reef, 305km east of Queensland, with a catch of sea cucumbers. In November, a Vietnamese fishing vessel stopped in the Coral Sea reserve had 3 tons of sea cucumbers on board. In January, a Vietnamese skipper was jailed for two months, and crew members received suspended prison terms of two to six months. "The size of Australia's maritime domain may lead these fishermen to believe that our seas are unmonitored and therefore freely available to them," Laver said.

Francisco Blaha, a South Pacific fisheries consultant, said the blue boats may be operating with the support of backup boats that take on catches and provide fuel. AFMA said it was "alert to the possibility of a mother ship, or ships, supporting Vietnamese illegal fishing operations in Australian waters," although it had no proof.

In Papua New Guinea, Fisheries Minister Mao Zeming said the illegal poaching is a "national security issue which must be raised at the highest diplomatic levels." Poaching has become an issue in a general election due to be held from June 24 to July 8, in part because it raises questions about the ability of defense forces to protect the coast and marine resources.

Charles Abel, a member of parliament representing the province of Milne Bay, 5,600km from Vietnam, told local media that foreigners are taking millions of dollars' worth of marine creatures. "I believe there are at least 40 smaller vessels operating from a larger mother ship which bases outside our territorial waters," he said.

The issue also has implications for international relationships for Vietnam, which is seeking full membership of the Western and Central Pacific Fisheries Commission, a 26-member body regulating the high seas in the area.

Vietnam, a non-member cooperating state, deflected responsibility for the blue boats at a December meeting in Fiji, sparking tensions. Its delegation head, Vu Duyen Hai, said Vietnam has 105,000 blue boats, but denied they were behind the illegal, unreported and unregulated fishing.

"We are adamantly demanding that Vietnam discharge its international obligation to combat IUU in all its forms by taking action against those perpetrators of these crimes," said Eugene Pangelinan, Micronesia's fisheries director. "They are actually coming in close to our homes and taking fish that we depend on."

Australia's fisheries management authority said it is working with the Vietnamese authorities and is planning to visit Vietnamese ports to combat IUU activities. Purcell said that curbing poaching requires both continued enforcement and foreign investment to help fishermen such as those in Vietnam to diversify their livelihoods.

Blaha said none of the solutions were likely to be easy. "Ultimately, it is [a matter of] flag state responsibility, so Vietnam is responsible, and in a logical world, trade sanctions should be applied," he said.

One solution could lie with the European Union, which receives substantial processed fish imports from Vietnam. The EU uses a yellow and red card system for controlling imports, imposing penalties where IUU fishing is proven. Countries such as Tuvalu that have been shown yellow cards have been forced to reform quickly.