India's Minister of Defense Manohar Parrikar (L) and U.S. Defense Secretary Ash Carter (C) inspect a jet engine in the hangar deck on the USS Eisenhower off the coast of Virginia, in the Atlantic Ocean in December 2015.    © Reuters
April 13, 2016 19:00 JST | China
CopyCopied

Over the last two decades, the U.S. has unwaveringly assisted India in building strategic heft to balance Chinese military power. This was based on the assumption that both countries shared a common vision of a stable and prosperous Asia free of Chinese hegemony. In 2015, they announced a joint vision for the Asia-Pacific and Indian Ocean region, including a common understanding on freedom of navigation and overflight, especially in the South China Sea.

The U.S. also gave India the label of "net provider of security" in the Indian Ocean and beyond in the belief that their two navies could work in partnership to uphold the safety and security of international shipping.

The U.S. ambassador to India has pitched for a greater role by the Indian navy in the Indo-Pacific region and expressed hopes that their navies would operate in tandem, with warships "steaming together" becoming a common and welcome sight. The head of the U.S. Pacific Command, Admiral Harry Harris, has publicly pressed India to join Washington's closest allies in the region (Australia and Japan) and "aspire to operate anywhere on the high seas and airspace above them."

However, becoming a "net maritime security provider" is a challenge -- and the responsibility has created a dilemma for India, placing enormous political and strategic demands on Prime Minister Narendra Modi's government and operational constraints on the Indian navy.

India has been selective about what it has drawn from America's  encouragement. It has welcomed Japan as part of a trilateral dialogue on maritime cooperation, including conducting collective naval exercises. India also responded favorably to suggestions for another trilateral dialogue -- with Australia and Japan. However, it does not appear to be enthusiastic about conducting joint naval patrols in and around the South China Sea with the U.S. and its allies.

The Indian Minister of Defense rejected suggestions that India and the U.S. were discussing the proposal and observed that "India has never taken part in any joint patrol, the question of joint patrols does not arise." It is worth mentioning that India conducts coordinated patrols in the Bay of Bengal with its neighbors Indonesia, Myanmar and Thailand.

The Indian navy conducts exercises with several of its international counterparts, including the Malabar naval exercises, held regularly between Indian and U.S. forces, which since 2015 have also included the Japanese navy. These have grown in sophistication and complexity, including participation by aircraft carriers and U.S. nuclear submarines. In essence, the Indo-U.S. maritime cooperation has moved at a rapid pace and both navies have institutionalized a number of operational and training agendas.

India is also looking to the U.S. for a number of "transformative defense technologies" through the Defence Technology and Trade Initiative. As part of this cooperation, the Indian navy is keen to acquire Electromagnetic Aircraft Launch System-Advanced Arresting Gear technology, which enables aircraft deceleration, for its future aircraft carrier projects and Airborne Early Warning and Control aircraft.

Interestingly, ahead of U.S. Defense Secretary Ash Carter's visit to India this month, a U.S. congressional resolution was moved to elevate India on a par with America's NATO allies in order to facilitate trade and technology transfer, thereby "shortening the time required for the notification of sale or export of defense articles from the U.S. to India."

The U.S. is investing enormous political and strategic capital in India, and has called it the defining partnership for its "rebalance to Asia" policy. However, the Indian navy is not ready for maneuvers outside the Indian Ocean, its primary area of interest and operations thus far. This is despite its maritime security strategy, which identifies the South China Sea in the east and the west coast of Africa to its west as regions of primary interest. There are at least six reasons that preclude the Indian navy from engaging in operations in these waters.

First, India's constraints stem from China's sensitivities to multilateral naval initiatives, which in most cases are led by the U.S. and its allies, and which the Chinese view as being aimed at containing them. In 2007, China reacted sharply to India-U.S. Malabar naval exercises that also involved Australia, Japan and Singapore. In March 2016, the U.S. reiterated the need for a quadrilateral security dialogue but India rejected the proposal, apparently so as not to antagonize China.

Second, India is concerned that any naval grouping which includes its navy and is targeted against China could invite reprisals from Beijing, which might intensify its naval operations in the Arabian Sea. This could see China positioning an aircraft carrier in a Pakistani port -- an outcome that would thoroughly unnerve India. Shen Dingli, a professor at China's Fudan University, goes as far as to argue that "China actually has many ways to hurt India."

Third, at the operational level, the Indian navy has various responsibilities, including coastal security, particularly after the 2008 Mumbai terrorist attacks, international obligations such as counter-piracy operations in the Gulf of Aden, and maritime diplomacy. Its current naval capacity is limited and the Indian navy might not be able to sustain task forces in the South China Sea, the Gulf of Aden and the Indian Ocean simultaneously while also undertaking coastal security operations.

Fourth, frequent Chinese forays led by the People's Liberation Army Navy submarines have "boxed" the Indian navy into the Indian Ocean. The Indian navy is forced to concentrate on surveillance and monitoring of the complex underwater environment, which presents enormous difficulties for submarine detection. The current focus of the Indian navy is to build additional anti-submarine warfare ships and submarines that are designed to detect Chinese submarines.

Fifth, Indian naval operations are also complicated by recent Chinese success in obtaining formal access to Djibouti, in the horn of Africa, where it is upgrading port facilities for use by the PLA Navy. According to a senior U.S. official, Chinese military facilities may even overshadow U.S. military installations in the area, prompting the latter to relocate to more secure "locations outside Djibouti where they are better protected from interception by the Chinese."

Finally, there is the burgeoning Sino-Indian dialogue process. India and China held their first ever bilateral maritime dialogue in February this year. They share common positions on maritime security issues and have so far kept contentious naval issues out of the discussions. India would not like to derail this process and prefers to invest politico-diplomatic capital to get it off to a good start. The dialogue has the potential to help the two navies develop robust confidence-building measures given that the Chinese naval presence in the region is set to grow, particularly after China has established itself in Djibouti.

The U.S. expects India to play a proactive role; this was the reason Washington labeled it the "net provider of security" in the Indian Ocean and beyond. Further, the U.S. has emerged as the second largest supplier of military hardware for the Indian armed forces after Russia, and is therefore likely to be an important source for India's future high-end naval acquisitions.

U.S. technology transfers and military sales are critical for India to challenge China in the Indian Ocean and are a strategic necessity if the U.S. is to contain China in the Indo-Pacific region. Interestingly, the U.S. has even shown itself willing to address Indian protests over Washington's recent sale of F-16 fighter jets to Pakistan.

However, India does not appear to be ready to take on the role of "net security provider" in the Indian Ocean as well as supporting U.S.-led joint patrols in the vicinity of the South China Sea. It would prefer to focus on the Indian Ocean, which also resonates with the Indian government's policy of "neighborhood first."  The U.S. needs to bide its time until the Chinese naval threat reaches such levels that India willingly joins U.S.-led multinational maritime operations against it. 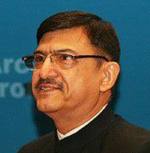 Vijay Sakhuja is director of the National Maritime Foundation, New Delhi, a former naval officer and author of "Asian Maritime Power in the 21st Century."