Conditional on not conflicting with Constitution, top spokesperson says 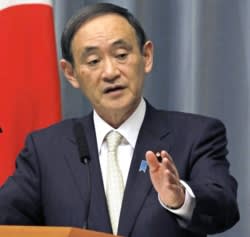 TOKYO -- The Abe government will not disavow use of a Meiji-era education document that contains language legitimizing militarism, so long as the presentation does not conflict with the Constitution or governing law, according to its top spokesperson.

At issue is the Imperial Rescript on Education, an 1890 decree promoting nationalist education that has come under scrutiny because it is recited by students at a kindergarten in Osaka operated by scandal-hit Moritomo Gakuen.

In addition to stressing such general ethics as filial piety and good relations between married couples, the document pronounces citizens as "subjects" and calls on them to offer themselves courageously to the State in times of emergency. Such encouragement of subjects to sacrifice their bodies for the country legitimized militarism. For this reason, the Diet decided to abolish it in 1948, citing violations of basic human rights.

"With proper consideration that the rescript is handled in a way that does not conflict with the constitution or the Basic Act on Education, we do not oppose using it" in schools, Chief Cabinet Secretary Yoshihide Suga said at Monday's press conference.

Suga's statement comes after Prime Minister Shinzo Abe's cabinet endorsed on Friday a document outlining the government's position that its "use as educational material will not be opposed, provided it is not in conflict with the constitution or Basic Act on Education."

Hirokazu Matsuno, minister of education, culture, sports, science and technology, expressed a similar sentiment, arguing that "with proper consideration, there is no problem with using [the rescript] in classrooms."

Calls for reassessment of the document as having "universal principles" are gaining traction among the more conservative faction of Liberal Democratic Party. "The core spirit of the Imperial Rescript on Education should be reclaimed," Defense Minister Tomomi Inada said last month.

The written statement from the government only recognizes turning the decree into educational material as long as it is handled in a way that does not violate the constitution or Basic Act on Education, and does not recognize teaching the material to legitimize militarism. "The Imperial Rescript on Education has lost its legal effect," stressed Suga. "It would be improper for the rescript to provide the single source of guidance for Japanese education."

But opposition parties are worried that the government's moves will once again popularize the Imperial Rescript in classrooms, as Japanese elementary schools are set to officially include morality classes beginning in 2018.

"We must carefully consider if it is truly acceptable to make something like this educational material," said Yoshihiko Noda, secretary-general of the leading opposition Democratic Party, at a press conference on Monday. Taking into account the Diet's abolition of the rescript in 1948, Noda asked of the Abe government's position, "is this not contrary to the answers from previous governments?"

Similarly, Akira Koike, head of the secretariat of the Japanese Communist Party, said, "This is an abnormal decision. From the start, the Imperial Rescript on Education conflicts with the constitution and Basic Act on Education. The danger of the Abe government is apparent."